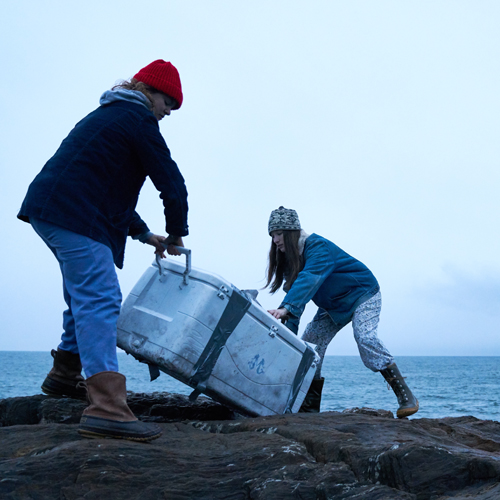 Writers: Blow the Man Down

Welcome to Easter Cove, a salty fishing village on the far reaches of Maine’s rocky coast. Grieving the loss of their mother and facing an uncertain future, Mary Beth & Priscilla Connolly cover up a gruesome run-in with a dangerous man. To conceal their crime, the sisters must go deeper into Easter Cove’s underbelly and uncover the town matriarchs’ darkest secrets.

Originally from salty Beverly, Massachusetts, Bridget Savage Cole grew up working on her dad’s construction crew and serving tourists at seaside restaurants. She attended Wesleyan University, where she discovered a passion for choreography and cinematography and began creating projects with DIY vigor. After moving to New York City, Bridget found herself creating videos for Nylon Magazine, and began shooting and directing music videos for bands such as Future Islands and Haerts. Since then, her music videos have been featured on MTV2, UK MTV and her narrative work has screened at numerous festivals including SXSW and Bend Film Festival. In 2011, she was selected to participate in AFI’s Directing Workshop for Women, through which she directed the award-winning short film Owiewanna, co-written by Danielle Krudy.   Bridget has also created original narrative content for Funny or Die and Refinery 29, where she premiered her short Swell, starring Gabriel Luna and Britt Lower. She has served on the board of the Commercial Directing Diversity Program, run by the Association of Commercial Producers, and is passionate about supporting women in film.

Growing up in Ohio, Danielle Krudy explored storytelling through writing poetry and making movies with her two sisters using her father’s home video camera. Danielle went on to major in Film Studies at Wesleyan University followed by a post-graduate fellowship to study cinematography at the German Filmakademie Baden-Württemberg.   Returning to New York City, Danielle immersed herself in the world of indie filmmaking, shooting doc and narrative shorts as a DP while working at a camera rental house. She eventually worked as assistant for Oscar-nominated Director of Photography, Matthew Libatique, on films such as Black Swan. Eager to complement her production experience, Danielle went on to work at Annapurna Pictures as a reader for CEO and Producer Megan Ellison and as the company’s Creative Researcher, working with directors including Bennett Miller, David O. Russell, Angela Robinson and Chris Cunningham on their feature projects as a researcher and story editor.   Joining forces with Bridget Savage Cole nearly eight years ago, the two founded R.I.P. Dora, a women’s film collective, through which the narrative short Serena was created by an all-female production team. Blow the Man Down is their first feature.