From Detroit to the World

A life dedicated to lifting up others

Help independent filmmakers tell their stories.
Make a donation to From Detroit to the World today.


Film Independent’s Fiscal Sponsorship program opens the door to nonprofit funding for independent filmmakers and media artists. Donate today and help bring From Detroit to the World to life. 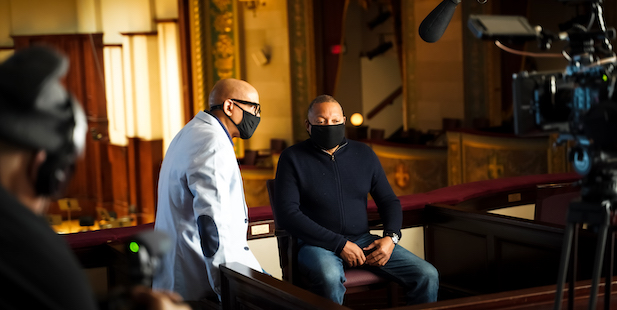 Marcus Belgrave made his reputation as a trumpet player with Ray Charles, Motown’s Funk Brothers, and Charlie Mingus. Yet when he had the opportunity to leave Detroit for larger opportunities, he stayed behind to become a teacher and community leader, lifting up his city and his art form at the expense of his own fame.

Since his professional debut at the age of 12, Marcus Belgrave has played on some of the most important musical projects of the last 50 years, yet he hasn’t received the recognition that many of his peers have, nor did he seek it.

Belgrave was born in Chester, Pennsylvania, where his musician father helped foster a love of music. He picked up the trumpet and found a mentor in ’50s jazz legend Clifford Brown. He was chosen to join Ray Charles’ touring band and recorded with Charles, saxophonist David “Fathead” Newman, and Charlie Mingus. Motown invited Belgrave to play on several major sessions in the early 60s, and he settled in the city of Detroit due to the reliable work.
Motown left Detroit in 1972, taking much of its session work with it, but Belgrave stayed, getting involved in significant music education and mentorship programs, as well as the arts collective Tribe. Tribe contributed a vibrant black culture to the city, with a magazine and a record label that offered opportunities to musicians and writers who needed a stable outlet for their art.

Belgrave’s mentorship resulted in major players in the jazz world such as Geri Allen, Kenny Garrett, James Carter, Regina Carter, Theo Croker and Endea Owens. He was invited to play in the inaugural Lincoln Center Jazz Orchestra with Wynton Marsalis, who in turn would send young musicians to train with Belgrave.

Belgrave passed in 2015 and was celebrated internationally by news outlets such as The Guardian and the New York Times. While perhaps a footnote to the average music fan, Belgrave’s dedication to his craft and mentorship has allowed his legacy to live on in dozens of ways: in his city, his students, and his music.

Make a donation to From Detroit to the World.

Director Timashion Jones is a Detroit based filmmaker that has worked in narrative and documentary for over a decade. In 2011, Timashion co-founded Framed by Grace Films. Their debut film, A Love that Hurts, premiered in 2013, followed by the sophomore project, the three-time Emmy Award wining documentary, Cody High, in 2014. The 3rd documentary that they produced, Life In Osborn, was released in 2015. In 2016, Timashion started TBOP Media. HIs first solo documentary was titled “Africa: Through the Eyes of a Visionaire,” where he documented a 10-day journey through historic sites of Ethiopia and Egypt. In 2019 Timashion produced and directed “Hope 911” a film that explores the traumas that place adolescents at risk of suicide.

Producer Brad Torreano worked from 1996 to 2004 in the world of independent film in Southeast Michigan as a producer and editor on multiple short and feature length films. He transitioned to work on corporate and non-profit videos, acting as a producer, director and editor. Brad worked on major online and television campaigns for Southeast Michigan companies and was hired as an events producer to create quick-turnaround videos for corporate live events. In 2020 Brad joined former LLamasoft CEO Don Hicks on artistic projects, including his software company Saganworks and his nonprofit CultureVerse. The former, an app that “gamifies” data curation in 3D spaces, debuts in late 2022/early 2023, while the latter is currently working with arts organizations and artists with two purposes: creating online galleries for artists that do not have access to in-person galleries, and scanning/archiving art and statues for historical documentation.

Make a donation to From Detroit to the World.