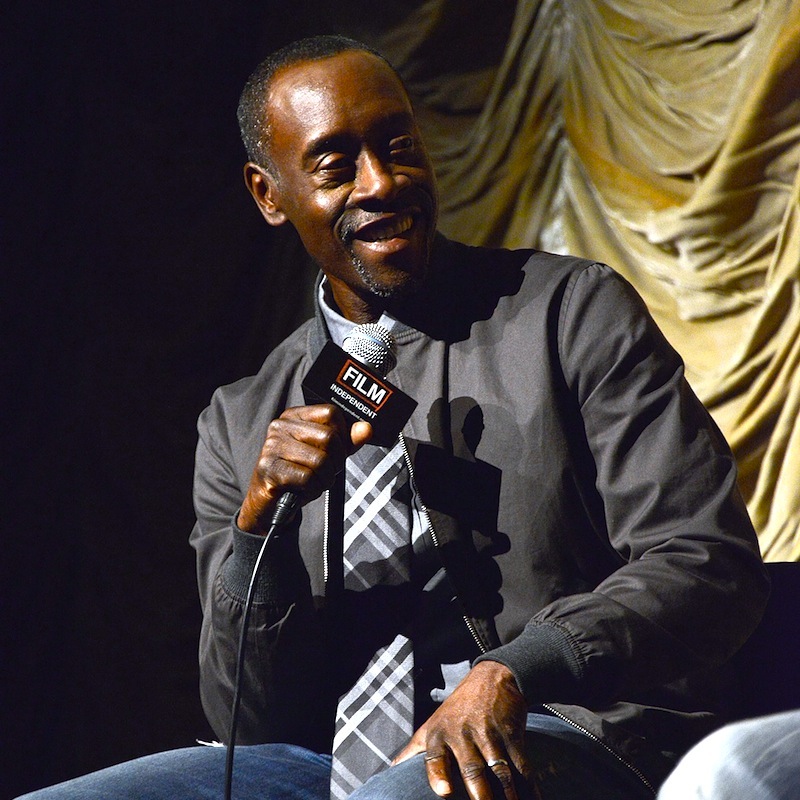 Since being named Best Supporting Actor by the Los Angeles Film Critics for his breakout performance opposite Denzel Washington in Devil in a Blue Dress, Don Cheadle has consistently turned in powerful performances on the stage and screen.  Mr. Cheadle has starred in such major motion pictures as the Academy Award®-winning Traffic from USA Films and the Warner Bros. hit Ocean’s Eleven, opposite George Clooney, Julia Roberts, Brad Pitt and Matt Damon.  In both films, Mr. Cheadle worked with director Steven Soderbergh, with whom he first collaborated on the Universal film Out of Sight, starring alongside George Clooney, Jennifer López and Ving Rhames.

Mr. Cheadle has embraced independent features, working on such projects as the all-digital Manic, by director Jordan Melamed and the Showtime feature Things Behind The Sun, directed by Allison Anders—a performance which garnered him an Emmy nomination.  Both films premiered at the Sundance Film Festival in 2001.

He is also well-recognized for his television work.  He received a Golden Globe award for his remarkable portrayal of Sammy Davis Jr. in HBO’s The Rat Pack, a performance which was also nominated for a best supporting actor Emmy.  That same year, he received a lead actor Emmy nomination for his starring role in HBO’s adaptation of the critically-acclaimed, best-selling novel A Lesson Before Dying by Ernest J. Gaines, in which he starred opposite Cicely Tyson and Mekhi Phifer.  He also starred for HBO in Rebound: The Legend of Earl “The Goat” Manigault, directed by Eriq La Salle.  Well known for his two-year stint in the role of “District Attorney John Littleton” on David E. Kelley’s critically-acclaimed series Picket Fences, Mr. Cheadle’s other series credits include a series regular role on The Golden Palace and a recurring role on The Fresh Prince of Bel-Air. Mr. Cheadle was also part of the stellar cast of the thrilling live CBS television broadcast of Fail Safe, in which he starred opposite George Clooney, James Cromwell, Brian Dennehy, Richard Dreyfuss, and Harvey Keitel.

An accomplished stage actor, Mr. Cheadle originated the role of “Booth” in Suzan-Lori Parks’ Pulitzer Prize-winning play Top Dog Underdog at New York’s Public Theatre under the direction or George C. Wolfe.  His other stage credits include Leon, Lena and Lenz at the Guthrie Theater in Minneapolis; The Grapes of Wrath and Liquid Skin at the Mixed Blood Theater in Minneapolis; Cymbeline at The New York Shakespeare Festival; ‘Tis a Pity She’s a Whore at Chicago’s Goodman Theater; and Athol Fugard’s South African play Blood Knot at The Complex Theater in Hollywood.

Born in Kansas City, Missouri, Mr. Cheadle later relocated to Lincoln, Nebraska and Denver, Colorado before he finally settled in Los Angeles.  He attended the prestigious California Institute of the Arts in Valencia, California where he received his Bachelor’s Degree in Fine Arts.  With the encouragement of his college friends, Mr. Cheadle auditioned for a variety of film and television roles while attending school and landed a recurring role on the hit series Fame.  This led to feature film roles in Colors, directed by Dennis Hopper; the John Irvin-directed Hamburger Hill, opposite Dylan McDermott, and Meteor Man directed by Robert Townsend.

A talented musician who plays saxophone, writes music and sings, Mr. Cheadle is also an accomplished director with the stage productions of Cincinnati Man at the Attic Theater, the critically-acclaimed The Trip at Friends and Artists Theater in Hollywood and Three, True, One at the Electric Lodge in Venice, California on an already-impressive resume.