LOS ANGELES (November 16, 2018) – This morning, Film Independent announced the nominations for the 2019 Film Independent Spirit Awards. The Spirit Awards are the primary fundraiser for Film Independent’s year-round programs, which cultivate the careers of emerging filmmakers and promote diversity in the industry. Film Independent President Josh Welsh presided over the press conference held at the W Hotel in Hollywood, with actors Gemma Chan and Molly Shannon presenting the nominations. Nominees for Best Feature included Eighth Grade, First Reformed, If Beale Street Could Talk, Leave No Trace and You Were Never Really Here.

“This year’s nominees reflect the bold originality that is the heart of independent film,” said Film Independent President Josh Welsh. “At a time when huge tent-pole franchises threaten to dominate our film culture, this year’s films and filmmakers offer something completely different – something vital, uncompromising, and needed. The nominees also show that, when it comes to diversity and inclusion, independent film is leading the way for the rest of the industry.”

Winners, who are selected by Film Independent Members, will be announced at the Spirit Awards on Saturday, February 23, 2019. The awards ceremony will be held on the beach in Santa Monica, just north of the Santa Monica Pier. The show will broadcast live exclusively on IFC at 2:00 pm PT/ 5:00 pm ET.

Film Independent is proud to announce the return of our collaboration with AT&T, who joins once again as Premier Sponsor and Official Wireless & Video Services Partner. American Airlines joins for the fifth year and returns to fund the Bonnie Award, recognizing a mid-career female director with a $50,000 unrestricted grant. And we welcome this year’s Official Automotive Partner, Subaru of America.

For more information on submission guidelines, voting, the history of the Spirit Awards and more, please visit spiritawards.com.

BEST FEATURE (Award given to the producer. Executive Producers are not awarded.)


BEST FIRST FEATURE (Award given to the director and producer)


JOHN CASSAVETES AWARD – Given to the best feature made for under $500,000 (Award given to the writer, director and producer. Executive Producers are not awarded.)

Nicole Holofcener and Jeff Whitty
Can You Ever Forgive Me?

Boots Riley
Sorry to Bother You

Zak Mulligan
We the Animals

Keiko Deguchi, Brian A. Kates, Jeremiah Zagar
We the Animals

Raúl Castillo
We the Animals

Richard E. Grant
Can You Ever Forgive Me?


ROBERT ALTMAN AWARD – Given to one film’s director, casting director and ensemble cast


BEST DOCUMENTARY (Award given to the director and producer)


BEST INTERNATIONAL FILM (Award given to the director)


BONNIE AWARD – Bonnie Tiburzi Caputo joined American Airlines in 1973 at age 24, becoming the first female pilot to fly for a major U.S. airline. In her honor, the second Bonnie Award will recognize a mid-career female director with a $50,000 unrestricted grant, sponsored by American Airlines.


SOMEONE TO WATCH AWARD – The 25th annual Someone to Watch Award recognizes a talented filmmaker of singular vision who has not yet received appropriate recognition. The award includes a $25,000 unrestricted grant.

Jeremiah Zagar
Director of We the Animals


TRUER THAN FICTION AWARD – The 24th annual Truer Than Fiction Award is presented to an emerging director of non-fiction features who has not yet received significant recognition. The award includes a $25,000 unrestricted grant.

Alexandria Bombach
Director of On Her Shoulders

RaMell Ross
Director of Hale County This Morning, This Evening 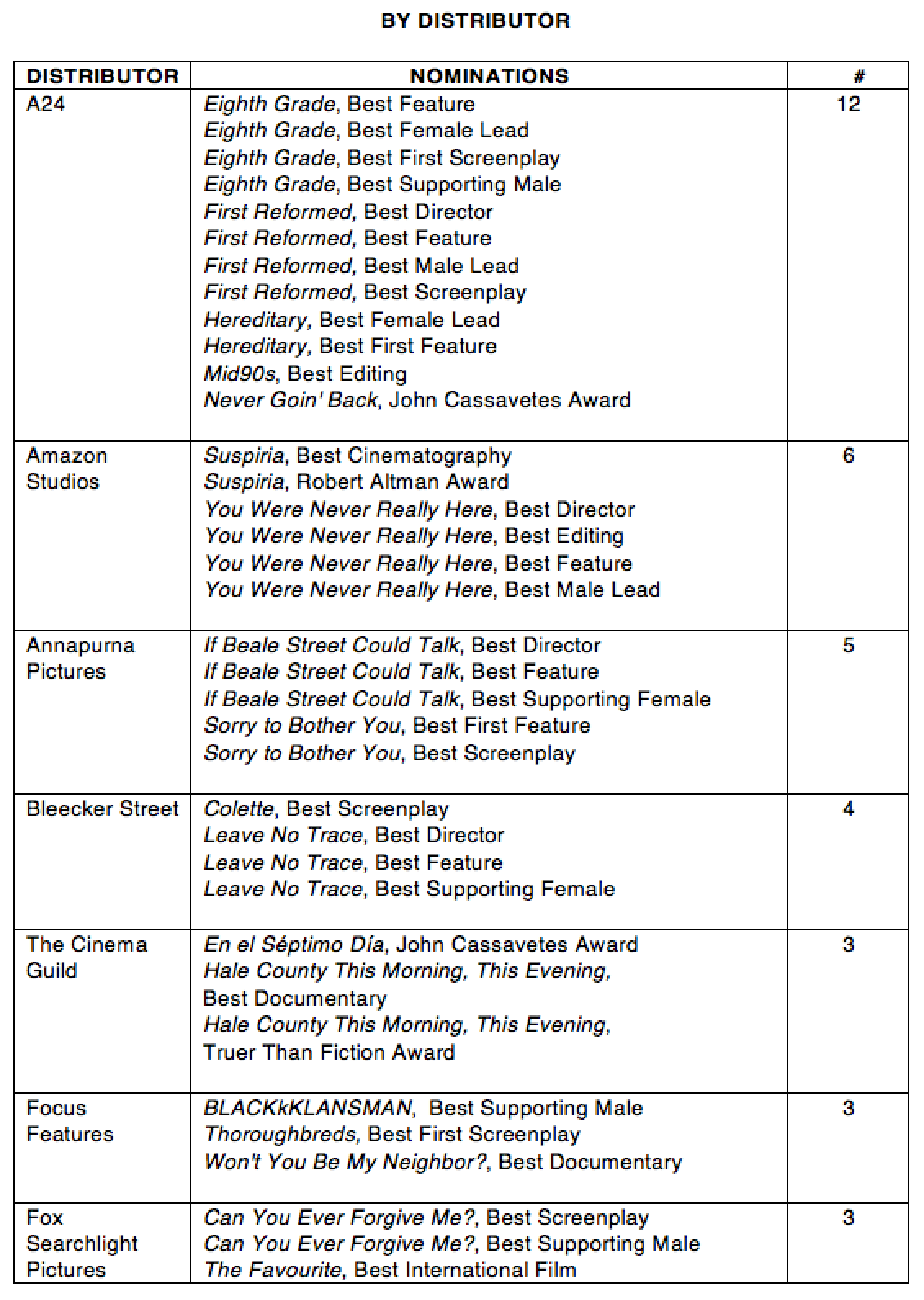 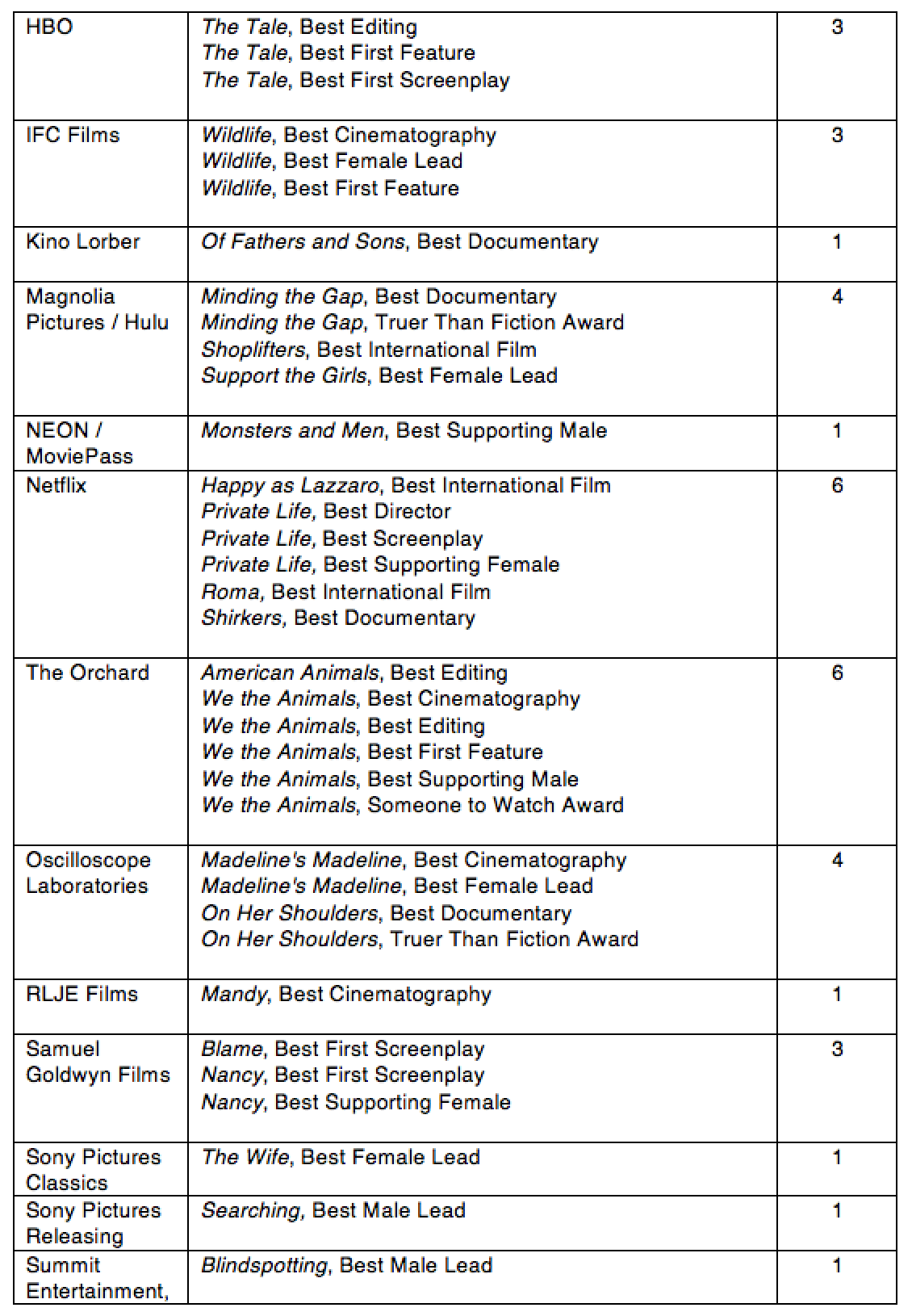 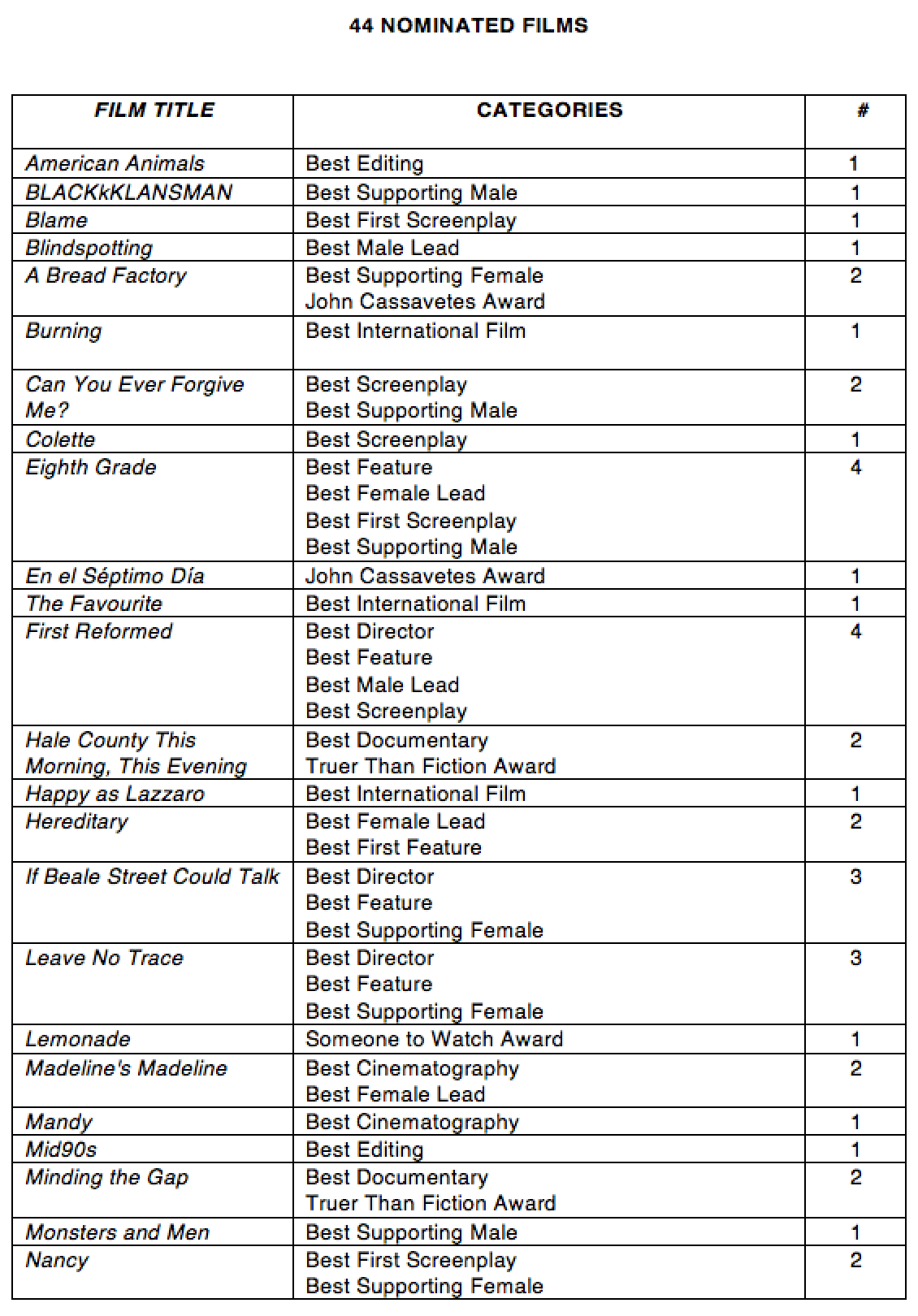 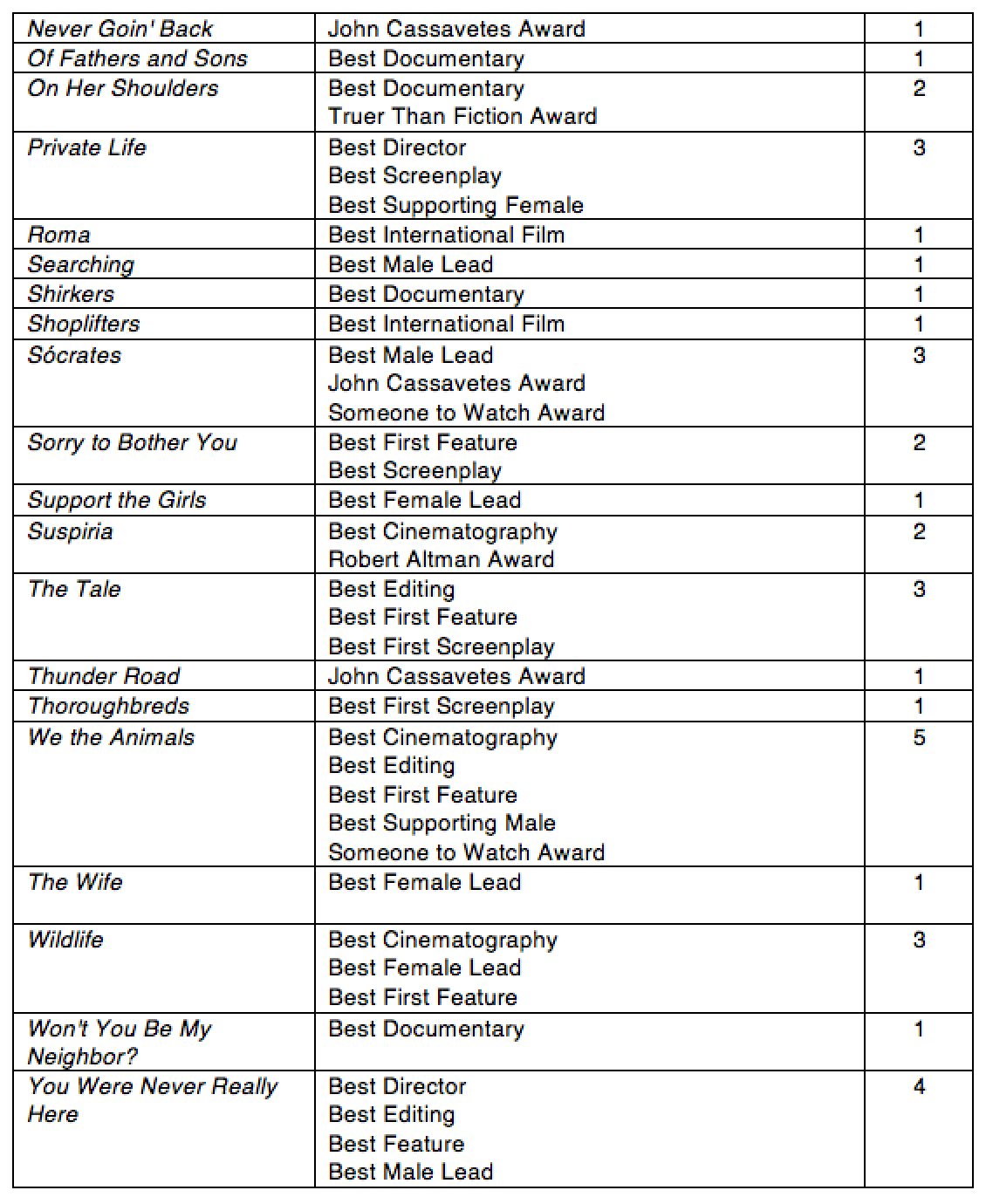 ABOUT THE FILM INDEPENDENT SPIRIT AWARDS

Film Independent is the nonprofit arts organization that champions creative independence in visual storytelling and supports a community of artists who embody diversity, innovation and uniqueness of vision. Film Independent helps filmmakers make their movies, builds an audience for their projects, and works to diversify the film industry. Film Independent’s Board of Directors, filmmakers, staff and constituents is comprised of an inclusive community of individuals across ability, age, ethnicity, gender, race and sexual orientation. Anyone passionate about film can become a Member, whether you are a filmmaker, industry professional or a film lover.

In addition to producing the Spirit Awards, Film Independent produces Film Independent Presents, a year-round screening series for its members that offers unique cinematic experiences for the Los Angeles creative community and the general public.

For more information or to become a Member, visit filmindependent.org.

IFC is the home of offbeat, unexpected comedies. Series Brockmire, Stan Against Evil, Baroness von Sketch Show and Documentary Now! air alongside fan-favorite movies and comedic cult TV shows. IFC is owned and operated by AMC Networks Inc., and available across multiple platforms. IFC is Always On, Slightly Off.