The secret world of ballet in post-revolution Iran

A Persian tale set in the dead of winter about a 11-year-old girl who discovers the underground, illegal ballet group of post-Islamic revolution Tehran and rewrites her own destiny.

During a treacherous winter in post-Islamic revolution Tehran, AREZOU, an 11-year-old girl, ﬁnds herself thrust into adulthood too soon. Amidst an unstable world ﬁlled with conﬂict and division due to socio-economic, political and religious differences at home, school and society at large, Arezou is forced to choose between her devotion to family and the opportunity for freedom.

Left to care for her unresponsive mother, AZADEH, who was rendered disabled and catatonic following a horriﬁc tragedy, Arezou spends her days in quiet obedience, alternating between school, her sad home and a rug warehouse, where her broken- hearted and depressed father, OMID, works. With no hope for a bright future in sight, Arezou meets a mysterious woman one fateful afternoon — and everything changes.

Journeying through the isolated warehouse, Arezou discovers remnants of the disbanded Iranian National Ballet company and the beautiful PARVANEH, who she initially runs from. However, destiny brings them together again, and on a snowy night, as Parvaneh sews a pair of handmade ballet slippers, she introduces Arezou to the secret world of the underground ballet — one ﬁlled with beauty, creativity, joy, and an avenue for self- expression and processing her repressed emotions. She forms a strong bond with the passionate, surrogate mother ﬁgure and ﬁnds her voice in a world of restrictions.

Make a donation to Arezou. 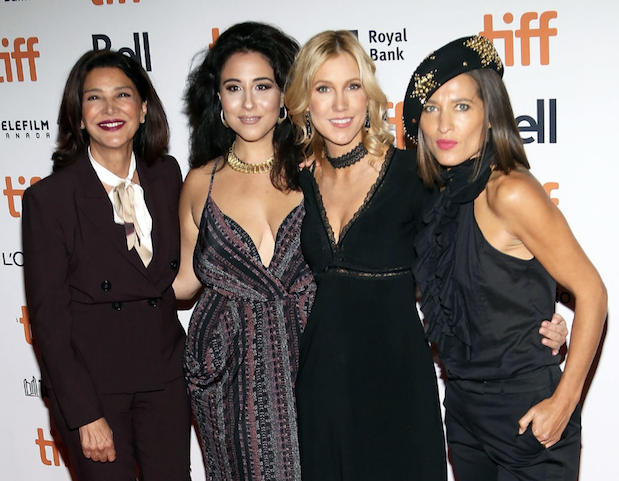 Sophia Kiapos is an Iranian-Greek/American ﬁlm director, writer and producer based in Los Angeles. Sophia’s foundation began in the theatre where she studied classical acting at Stella Adler Studio in New York City, and later at LAMDA in London. In 2014, Sophia directed her ﬁrst short ﬁlm, Olivia Martha Ilse starring James Frain (True Detective, Orphan Black) and Tammy Blanchard (Tallulah, Blue Jasmine). Sophia is a tremendous advocate for women and minorities in ﬁlm and in 2016 she founded a collective for women in the industry called Female Filmmakers. Today, Sophia supports well over 6,000 women in 40 countries working in different facets of ﬁlmmaking. In 2017, Sophia was brought on by WhoHaHa and Universal Pictures to direct Elizabeth Banks in ﬁve comedic sketches for the Pitch Perfect franchise. Sophia founded her production company, The Pack Pictures in 2019 and is committed to honoring women and minorities at the helm of independent ﬁlmmaking. Now more than ever, Sophia is ready and committed to breathing Arezou into reality and cinematic existence.

Chelsea Winstanley is an award-winning ﬁlmmaker and producer. More recently, she was a producer on Taika Waititi’s ﬁlm, Jojo Rabbit, which stars Scarlett Johansson and Sam Rockwell and will be released in October 2019 by Fox Searchlight, and the documentary Merata, which played Sundance and Berlin during its successful festival run and was picked up for distribution by Ava DuVernay’s company, Array Now. In 2014, she produced the hit vampire mockumentary What We Do In The Shadows, directed by Taika Waititi and Jermaine Clement — now a TV show for FX. Chelsea graduated at the top of her class from AUT in 2002 with a BC in Communications, majoring in Television, and she completed the EAVE Producers course in Europe in 2011. Currently residing in Los Angeles with her family, Chelsea is from the indigenous tribes Ngati Ranginui and Ngai Te Rangi of Aotearoa New Zealand through her mother and “Kiwi” through her father.

Send Bonnet was born and raised in France and graduated from the prestigious FEMIS Cinema School of Paris with a concentration in cinematography. Senda was classically trained to shoot on ﬁlm, but quickly adopted digital technology. She is a third-generation ﬁlmmaker and has been passionate about the medium of motion pictures and the possibility of telling stories through pictures since she was a girl. Filmmaking is in Senda’s blood. Her documentary work and feature ﬁlms have taken her all over the world and her work has won awards and been shown at major ﬁlm festivals. One of her more recent projects, The Blue Dress, premiered at the Berlin Film Festival.

Shamim Seifzadeh is an Iranian-American production designer. Shamim holds an MFA in Production Design from The American Film Institute (AFI). In 2012, AFI presented Shamim the Tom Yom Scholarship Award in recognition of her work. Shamim has contributed her immense talents as a production designer on 10 Coverfield Lane, Spectral, Captain Marvel, Pale Blue Dot, Lord of the Rings, and dozens of other studio-supported ﬁlms. Growing up in Iran, Shamim lived through the Iran-Iraq War, and every day battled the common social struggles of being a woman alongside millions of others. She believes that through storytelling, we can open conversations to taboo topics, thereby creating greater understanding and acceptance.

Make a donation to Arezou.