Barrio Television is the untold story of a band of Puerto Rican filmmakers who refused to let the first all-Latino produced TV show in American history be canceled.

Barrio Television is about a band of Puerto Rican filmmakers in 1972 who refused to take no for an answer. When New York’s local public television station WNET canceled their pilot because it touched on racism too much for their liking, the filmmakers padlocked the door to WNET’s live pledge drive and hijacked the event. Then, they filled the sidewalks outside their Columbus Circle office with protestors until the executives gave in. They finally got their own show—the way they wanted to make it. That is the birth of “Realidades”: the first bilingual Latino television show in American history.

Make a donation to Barrio Television. 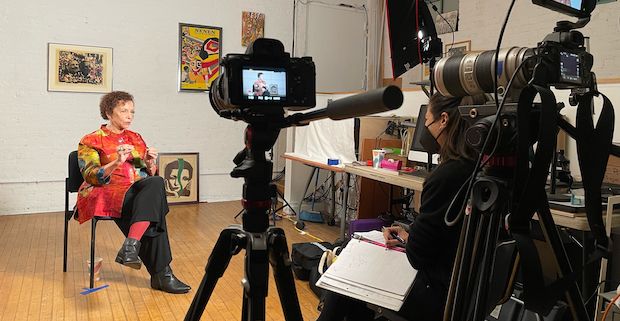 Christina DiPasquale is a storyteller focused on advancing a more just and participatory media. Christina has produced and scripted several short documentary films for the Youth First Initiative and Public Welfare Foundation, screened across the country to support decarceration efforts. She has led publicity and social impact campaigns for films including Dirty Wars, When Elephants Fight, and Unmanned. Christina has prepared individuals and groups to give high profile interviews, including Chelsea Manning, families separated by the Muslim ban, and youth in Charlottesville and Ferguson. Her archival research has been used by the Library of Congress and American Archive of Public Broadcasting. She is a Senior Fellow at the University of New Hampshire and serves on the Board of Directors of the Media Burn Independent Video Archive.

Make a donation to Barrio Television.