One day, one road that defined a lifetime.

Hunted by soldiers after a military coup, Peru’s First Lady must drive her very pregnant nanny to a hospital down a treacherous road in the Andes.

Finalist in the 2021 Page Awards, Blanca is an an edge-of-your-seat dramatic thriller screenplay written by Carlos Graña about a single, pivotal night in 1955.

Inspired by real people and historical events, the story is a beautiful, brutal, character-driven rollercoaster that thrusts two women from opposite ends of the country and society into a partnership for their own survival.

As the protagonists battle external challenges—the terrain, the army, and a vehicle neither knows how to operate—they must overcome personal demons, bad blood, and family secrets for even a remote chance to reach the end of the road.

Speeding down a dirt mountain trail in 1955, Chauffeur Jose (40) bleeds from a bullet wound and gives driving instructions to his his chicly-dressed passenger, Señora Pepa (30), who has never taken the wheel before. Jose calculates the soldiers hunting them are 30 minutes behind on foot—then passes out, leaving the car headed straight for a precipice. From the back seat, Blanca (18), nine months pregnant and in nothing but an old nightgown, lets out a scream.

Thus begins a thrilling ride that forces two people into a lifelong bond. In that sense, this is a love story, a buddy salvation like 1917, The Motorcycle Diaries, Thelma and Louise, The Shawshank Redemption. Blanca—a tiny lady of Inca descent from an impoverished village in the Andes—was employed as a nanny by Señora Pepa—tall, educated, from a privileged class of European descent in the coastal Peruvian capital of Lima—who was my grandmother. As a child, they were just Blanca and Grandma, inseparable, interdependent, almost indistinguishable. It wasn’t until adulthood that I wondered: How did two people from such opposite extremes of society and geography develop a lifetime bond closer than family?

This film, I hope, answers that question.

Make a donation to Blanca. 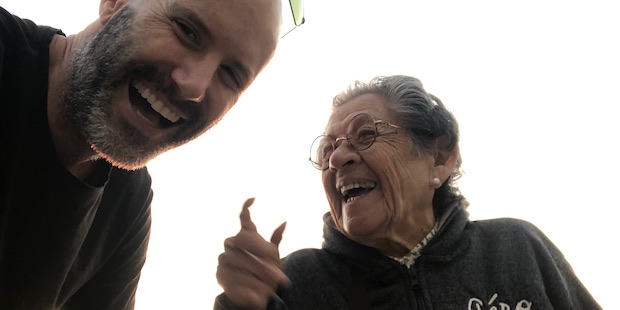 Over 15 years experience as 1AD or producer, countless feature films and shorts under
his belt, 8 of those features with Pablo Diez as DP. This is Tim’s third production with
director Carlos Graña.

Make a donation to Blanca.