Can brain surgery save the American dream?

Traumatic Brain Injury survivor Derek Dabkoski enrolls in a dangerous and experimental stem cell surgery to hopefully repair the damaged area of his brain as he and his wife Nadia, who has lived in the US for 30 years without ever being granted a green card, expect the birth of their first child, a daughter named Carmen.

TBI survivor Derek Dabkoski enrolls in an experimental stem cell surgery study to have stem cells injected directly into the injured area of his brain with the hopes of regaining some of the functionality he lost when he was brutally attacked and left for dead on the streets of San Francisco. He enrolls in this surgery at a difficult time for his family, as he and his wife Nadia, his primary caretaker with many restrictions because their long fight to get her a green card has been fruitless so far, are about to have their first child.

The story of Derek Changes His Mind follows the immediate medical challenges to Derek and Nadia, as larger systemic issues dictate the way they have to spend their days. From their tiny 225 square foot room above a garage, we root for the stem cells to repair Derek’s mind as we start to understand the daily challenges to this family, Derek’s life as a disabled person, Nadia’s life as a person denied access to the country she lives in and grew up in, and how a family stuck in these conditions have to fight constantly for the right and the means to live in and raise their newborn child in 21st century America.

Make a donation to Derek Changes His Mind. 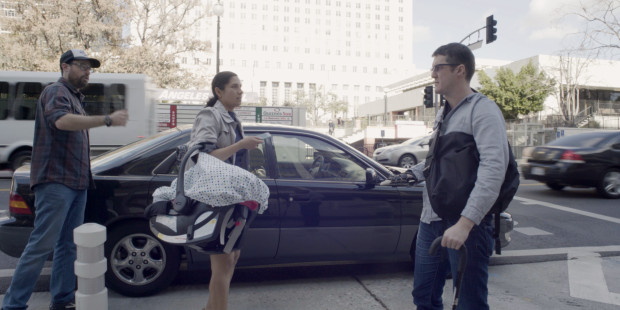 A native of San Francisco, Derek Dabkoski is an award-winning filmmaker whose films have screened at festivals internationally, including the San Francisco and Vancouver International Film Festivals. While making his undergraduate thesis film in San Francisco in 2006, he was brutally mugged and left for dead, bleeding from his head on the side of the road. Derek survived this attack but suffered brain damage and significant loss of mobility on his left side, seizures, and other complications. Despite these challenges he achieved his MFA in Filmmaking from the University of Southern California’s School of Cinematic Arts in 2017 with the help of his wife Nadia.

With a passion for telling raw, personal stories, Derek Changes His Mind is a chance for Derek to share an intimate portrait of his bourgeoning family as they experience life at the crossroads of neuro-medical science and immigration reform. Derek is as excited to present audiences with the birth of his daughter Carmen as he is with his groundbreaking stem cell surgery and his wife Nadia receiving her Green Card.

Ian McClellan started as a company electrician on the 2012 Sundance Grand Jury Prize-winning film Beasts of the Southern Wild. He went on to associate produce for Academy Award-winning filmmakers Rob Epstein and Jeffrey Friedman on their documentary The Battle of AmfAR (premiered Sundance 2013). He earned his MFA at the University of Southern California’s School of Cinematic Arts in film and television production in December 2016. The last thesis he produced, Lalo’s House, won a Student Academy Award in 2018. He now runs his production company Island Time Pictures, focused on enabling directors to realize their unique artist visions.

Ian spent a year in Derek and Nadia’s life for the filming of Derek Changes His Mind and became part of this small, challenged, and very funny family.

When Writer/Director/Cinematographer Im Joong Kim heard about the project Derek Changes His Mind, he connected to Derek and his family right away. For a documentary, the connection with the people is the key so that they feel comfortable in front of the camera. When the camera disappears from the subject’s mind, that’s when the real story begins. Im Joong used his camera to make connections between Derek, his family, and their struggles for the audience.

Born and raised in Seoul, South Korea by his Korean father and American mother, he is fluent in both cultures and languages. He moved from South Korea to Los Angeles to attend the USC SCA MFA program in writing and directing, and earned his degree in May, 2017. Since then he has worked with USKN, a news agency, where he brings relevant world news to the Korean market. When he is not filming or at work he’s developing a content-based web platform from which he hopes to launch a feature film in 2020.

Make a donation to Derek Changes His Mind.