After reconnecting with a woman from a past she prefers to forget, Brooklynn attempts to remain level headed, despite her mind consuming desires.

Picture it: 2021, no pandemic, rural southern Georgia. Brooklynn, a self assured perfectionist, just graduated from college and moved back home to her: traditional family, with their traditional views, and traditional lifestyles. But Brooklynn has a secret that is bound to flip that seemingly perfect world upside down. The secret? She’s gay, but no one knows. Not even Brooklynn. Well… that’s not entirely true. However, she does an amazing job compartmentalizing her closeted feelings. Being a first generation Jamaican-American, doesn’t help; she grew up listening to songs that praised the murder of gay people, and internalized the homophobic views held by many of her family members and friends. The feelings she shoves down comes to the forefront, when she accepts an internship in Atlanta, where she keeps running into Kai, a woman that challenges her sexuality, but also her relationship with her boyfriend of three years, Kadeem.

Make a donation to Discovering Brooklynn. 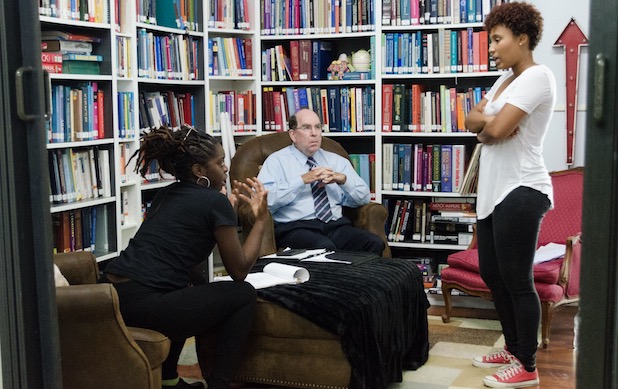 Often ostracized by her peers for being an awkward ‘black girl’, Aliya Brooks’ world was closed externally, but it allowed for her imagination to soar. Producing her first play at twelve years old piqued her interest, but it wasn’t until her third year in nursing school, that Brooks picked up the pen and began her writing journey. The ability of her words to influence a people fueled her, so poetry became her muse. Graduating nursing school did not prove enough for Brooks, who felt the need to write and explore impactful black characters; the misfits, the stereotypes, and everything in between. Her goal: to normalize the black experience in America. With that, Brooks wrote, directed and produced two short films She Knows and InQueeries, one of which was mentioned in the New York Times Newspaper, along with both being accepted into film festivals around the world. Assisting Emmy Nominated director, Dee Rees on an Oscars commercial, that highlighted women in film, has catapulted Brooks on the scene, affording her hands on experience with reputable filmmakers. She is currently working on a feature, entitled Discovering Brooklynn, that will tackle taboo subjects, and push forth more relatable underrepresented characters.

Make a donation to Discovering Brooklynn.