Change begins in your closet.

A film about fashion’s impact on the environment and the designer who’s doing something about it, “Fashion Reimagined” follows Amy Powney of London brand Mother of Pearl who decides at the height of her career that she can no longer participate in her industry’s destructive cycle. Instead, she sets off to produce a sustainable collection from field to finished garment, a pioneering journey across three continents that tests her strength and belief in humanity.

Fashion is among the most polluting industries in the world — the second biggest polluter of fresh water, contributing 8% of all greenhouse gases and 35% of ocean microplastic. The accelerated turnaround of trends known as “fast fashion” is only escalating the impact with global clothing production doubling between 2000-2014 and the average American now discarding 70 pounds of clothing per year, 85% of which ends up in landfills.

Fashion supply chains have many links across many countries, making it nearly impossible for brands to monitor and easy to pass the buck when something goes wrong. Unless a designer personally visits each supplier, she cannot be confident that her business is sustainable and ethical. Yet no designer has ever embarked on such a journey — until now.

Amy Powney’s historic quest to produce a sustainable collection begins when no one is listening. She’s dismissed for her lack of “buying power.” Dropped by a factory at the eleventh hour. Tormented by the many issues she uncovers including deforestation, animal mutilation and farmer suicide. Then the unthinkable happens. The sustainable fashion movement explodes. Amy suddenly finds herself at the forefront of the next environmental frontier, collaborating on initiatives with Prince Charles and BBC Earth and receiving coverage in The Hollywood Reporter, Vogue, and New York Magazine.

Hers is a David and Goliath story of a fiercely determined young woman from a rural, working class background fighting a highly complex behemoth of a system. It is also a lyrical reflection on the cost of our own consumption.

Make a donation to Fashion Reimagined. 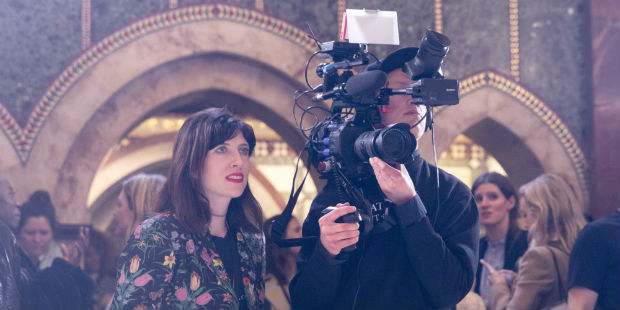 Becky Hutner is a Toronto-born filmmaker with work spanning documentaries, television and digital content. For the past three years, she has been documenting fashion and culture for London-based DUCK Productions, interviewing and collaborating with such luminaries as Cate Blanchett, Stella McCartney, Vivienne Westwood, Adwoa Aboah and Valentino and producing commercial work for Manolo Blahnik, Marks and Spencer and the Business of Fashion. Recent credits include Painting Her Story, a documentary series for National Gallery about the gender gap in art history and an educational series on sustainability for the British Fashion Council. Becky is an EMMY-nominated editor with credits including Being Canadian, a documentary starring Seth Rogen, Mike Myers and Ben Stiller. Vegetarian, plastic averse and never without her UV light-emitting water filter, her sustainable journey escalated in 2011 when she met late filmmaker and activist Rob Stewart and co-edited his award-winning documentary Revolution. Becky holds a B.F.A. from the Cinema School at the University of Southern California. Fashion Reimagined is her first feature as Producer/Director.

Daniel Goetz’s career launched in 2011 with the documentary The Hunger was our Companion, winning first prize at the German Generations Film Competition and screening on German National Television. As Head of Post at London-based DUCK Productions, Daniel oversees a team of up to 10 editors and an output of 100 film projects per year. He has shot and edited commercial work for dozens of clients including The Sunday Times, Cartier, Stylist Magazine and Swarovski. Daniel has taught several filmmaking workshops across Europe. His latest film, an Erasmus project titled Where we are from, combines the work of his students on the subject of migration. Daniel was also an editor on the multi-award-winning Amazon series MEM. His experience shooting the feature documentary Fashion Reimagined has deepened his love for alpacas and in the words of Vivienne Westwood, inspired him to “buy less, choose well, make it last.”

Lindsay Lowe is the founder and sole owner of DUCK Productions, a London-based production company specializing in fashion and lifestyle programming. In addition to establishing DUCK as the official production partner for London Fashion Week and The Fashion Awards, Lindsay oversees an output of 100 film projects per year, many of which she directs and produces herself. Notable DUCK projects include The Look, a three-year running series for Harper’s Bazaar featuring top fashion and entertainment personalities like Karl Lagerfeld and Kate Hudson, a documentary on Victoria Beckham’s fashion house and British Vogue’s Designer Fashion Fund, a docu-series following the journey of the designers nominated for Britain’s top fashion prize. Before starting DUCK in 2011, Lindsay spent 10 years producing television series for BBC, ITV and Channel 4 including Strictly Come Dancing, The Paul O’Grady Show, and This Morning.

Make a donation to Fashion Reimagined.