Four Nights and a Fire

A Native story from two perspectives - the living and the dead

A departed Ojibwe journeys to the afterlife, while a surviving relative finds resilience in the departed’s footsteps.

Robert, a young Ojibwe man, prepares for a sacred fire ceremony in the woods where his father used to hunt, desperate to feel close to him one last time.

Having just lost his dad, Robert buries himself in his photography, putting a barrier between himself and the reality of his loss, and the emptiness in front of him.

He stubbornly takes on the responsibility of the sole firekeeper, a role usually shared to avoid fatigue in keeping a sacred fire alive for four consecutive days and nights.

Meanwhile, the Spirit of his father finds the flame and seeks to console his son, though he is only able to watch, and grieves that he cannot comfort him.

As Robert fights to keep the flame alive and reckon with the loss of his father, the spirit fights his fear of the inevitable transition to the afterlife.

Make a donation to Four Nights and a Fire. 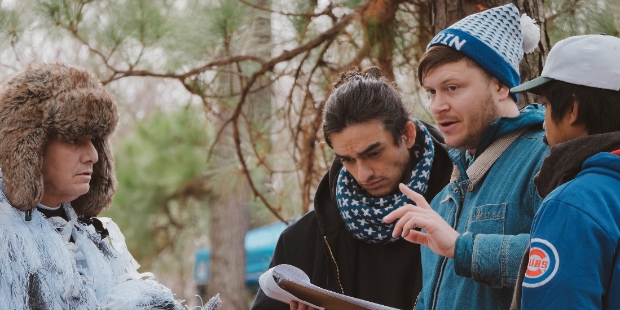 Alex Nystrom is an Ojibwe writer, director and producer from Minneapolis, Minnesota. He is an enrolled member of the Red Cliff Band of Lake Superior Chippewa Indians. Alex’s work focuses on exploring identity in the context of contemporary native stories.

Alex currently lives and works in Los Angeles as a director’s assistant to Amman Abbasi, director of Dayveon (Sundance Film Festival ‘17) and the upcoming feature, The Quench. His last credit is producer on the documentary short, Udaan (Soar), for Hindsight 2020 via Firelight Media, which premiered at AFI Docs and resides at PBS.

Alex was a fellow in the 2021 Native American Media Alliances’s TV Writer’s Lab in association with LA Skins Fest, and developed a pilot called Between, a supernatural mystery that follows a headstrong native man who protects his disappearing island from evil forces beyond his control.

Between was most recently selected for the second annual Indigenous List (2022) on The Black List in partnership with Illuminative and the Sundance Indigenous Program, which highlights the top up-and-coming Indigenous film and television writers in the U.S.

Jeff Walker – Producer
Jeff Walker is an independent film producer whose work includes screenings and awards at Outfest, Sundance, SXSW, and Champs-Élysées Film Festival to name a few. In 2018, Jeff was invited to the Cannes Producers Network and is a fellow of Film Independent, The IFP/Gotham Narrative Labs, The San Francisco Film Society, the IFP/French In Motion US & French Connection program, and is a graduate of the Venice Biennale Cinema College.

Jeremy Charles – Producer
A groundbreaking stylist and art director without fear, Jeremy’s visual spirit anchors the FireThief ethic. His clients include NBA superstars and Grammy nominees. His portfolio is legend. Born and raised in the ranchlands of northeast Oklahoma, in the town of Oologah—home of Will Rogers—Cherokee for “dark cloud.” Creating representative content for Indigenous peoples is a commitment for Jeremy.

Beginning his career as a freelance writer and graphic designer, Jeremy spent a decade as a photographer recognized for his bold portraiture and work in the music scene before turning to filmmaking in 2014. Jeremy has been involved in nearly every role in film production in hundreds of short docs, narrative shorts, branded content and music videos. He is a co-creator, producer and director for Osiyo, Voices of the Cherokee People which has earned 9 regional Emmys, and he was awarded Best Director in 2017 for the documentary short Singing Tradition. His direction of the music video for Everybody Needs by Branjae earned the Judge’s Choice Graphex award in 2018, and his films have been selected for numerous festivals around the world.

Mike Maliwanag – Cinematographer
Mike Maliwanag (pronounced MAH-li- WAH-nahg) is a Filipino American cinematographer based in Los Angeles. His work has been featured at the Sundance Film Festival, SXSW, Outfest, and other festivals across the world. Mike strives to shoot films for underrepresented communities. When not shooting he likes to travel and eat food from different parts of the world. He is currently obsessed with okonomiyaki from Hiroshima, Japan.

Benny Wayne Sully – Lead Actor
Benny Wayne Sully is an actor based in LA. He is an enrolled member of the Sicangu Lakota Oyate, hailing from the Rosebud Sioux Tribe. Film credits include the ABC TV pilot Prospect, directed by Randall Einhorn, and Joey Clift’s award-winning short film My First Native American Boyfriend, for which Benny received the Best Actor award from LA Skins Fest. He is a part of Native Voices at the Autry’s ensemble and also a proud member of Actors’ Equity Association. He most recently was 1 of 20 selected from over 11,000 applicants for the inaugural 2022 WarnerMedia Access Talent Spotlight Training Program, created to provide undiscovered and underrepresented actors an opportunity to receive coaching and exposure. You can find him on social media @thedoophus.

Make a donation to Four Nights and a Fire.