A bipolar girl breaks up with her psychiatrist.

Laila Stern is a hot headed young twenty-something girl attempting to navigate life with her bipolar disorder. Laila anxiously waits outside of Joan’s office plotting her escape from the drug cartel that is the American psychiatry industry. She interacts briefly with the other patients, revealing the composition of Joan’s clientele as college students mainly seeking study drugs. Laila confronts Joan regarding her apprehension and disdain for big pharma, which Laila’s views as crooked. Joan dismisses Laila’s claims and undermines her by questioning her mental stability. Joan accepts Laila’s apprehension and attempts to move on to other patients who wish to seek treatment. Laila erupts with feelings of neglect, as Joan fails to hear out Laila’s concerns before prescribing her more medication, and she accuses Joan of malpractice for overprescribing her Vyvanse, a powerful study drug. In the maelstrom of her emotional stirrup, Laila attempts to return pill bottles full of her latest prescription, Wellbutrin, by dumping them out over Joan’s desk. When Joan realizes Laila has been unmedicated for months, she discovers that Laila has been inflicting self-harm, and she finally gives Laila the time to talk and listens to her. Laila relaxes as she feels ready to be heard. Joan then leads Laila to meekly confess she still mourns her late mother, who passed six years ago. Joan abruptly reminds Laila that she is pressed for time with other patients but insists Laila takes her Wellbutrin prescription on the way out. Laila waits outside of the office to time Joan’s next appointment. It’s less than 30 seconds until the next patient walks out with a Vyvanse prescription. Laila storms into the office to berate Joan one last time before tearing up her Wellbutrin prescription outside of the office.

Make a donation to Happy Pills. 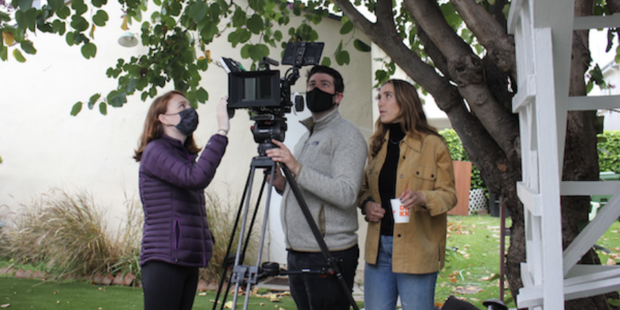 Born and raised in New York City, Erica Cantor is an LA-based independent filmmaker. Erica also wrote and directed short film The Consummate Manifesto and is currently working on developing her debut feature film. Erica started filmmaking while at Northwestern University, where she studied Project Management Engineering and Design. Erica formerly worked in real estate development before following her passion for film and social activism.

Erica is a stand-up comic and an improv actor. She was a member of the Conservatory Program at The Second City in Chicago and now studies at The Groundlings Theatre in Los Angeles.

Emma Flanders (she/hers) is a proud New Yorker and a lifelong world traveler. Most recently Emma produced The 78th Annual Dolphin Show at Northwestern University, the largest student-produced musical in the United States, in which she was able to overcome the obstacles of COVID-19 by creating an enriching in-person and virtual experience. Upon graduation Emma will be writing and producing a short film in conjunction with Synescope Studios. Outside of theatre and film Emma has worked in development at several non-profit organizations, including Batsheva Dance Company in Tel Aviv, Israel and The LGBT Center of New York.

Emma Raimi is an actress, writer and producer from Los Angeles, CA. Her film credits include Spider-Man 3 and short film Greatness Takes Time. Theatre credits include the world premiere of Phantom Tollbooth among others. A recent graduate of Northwestern University, Emma will be producing series CURED and short film The Fuckit List, in conjunction with Synescope Studios. She is represented by Grossman & Jack Talent.

Adam Birch is an Ohio raised, Los Angeles based cinematographer known for his intimate visuals and sensitive storytelling. After graduating from Northwestern University’s Radio/TV/Film program in 2020, Adam moved to LA to pursue a career as a Director of Photography. He was nominated for the Kodak Excellence in Cinematography Grant for his work on Bird Feeder, and was featured on Lyrical Lemonade for his work on Alex Banin’s Hollywood (No This Isn’t) music video.

He has apprenticed for esteemed automotive cinematographer and director Miguel de Olaso (Macgregor) and Emmy Award-winning cinematographer Per Larsson. Adam is a part of Growth & Co., a mentorship program for emerging cinematographers, and has been personally mentored by Industry leaders such as Natalie Kingston, Sing Howe Yam, Nyk Allen, Julia Swain, and Mike Reyes.

Make a donation to Happy Pills.