One can do a lot of living in a short time.

Jimmy in Saigon explores the mysterious life and death of Jimmy McDowell, a 24-year-old Vietnam veteran who died as a civilian in Saigon. Director Peter McDowell uncovers family secrets surrounding Jimmy’s drug use and sexuality, getting to know his brother who died when Peter was only five years old.

Jimmy in Saigon explores the mysterious death, radical life, and forbidden romance of a 24 year old Vietnam veteran who died in Saigon in 1972. Jimmy’s rejection of his family’s values and his eventual death created deep trauma within the lives of his surviving family and complicated how he was remembered.

Director Peter McDowell, Jimmy’s younger brother, was only 5 years old when Jimmy died under a shroud of secrecy and shame. Jimmy in Saigon follows Peter’s 10 year search to uncover secrets surrounding Jimmy’s sexual orientation and rumored drug use. Peter finds surprising connections with his deceased brother and struggles to reach a new understanding of his own identity as a gay man.

After leaving the army, Jimmy became a pacifist and chose to return to Vietnam while the war still raged. He died a year later. Why do some aspects of a remembered life fade, while others persist? Why are some memories cherished, and others buried? Peter’s journey provides an empathetic lens through which to explore Jimmy’s life in Saigon – a story of adventure and of love that was taboo at the time and still challenging today.

Make a donation to Jimmy In Saigon. 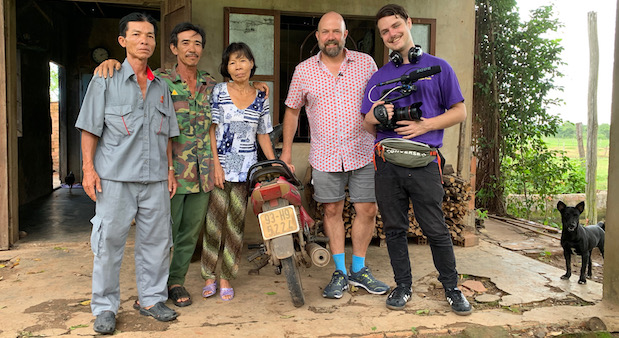 Surrounded by opera as a child and trained as a musician and actor, Peter has always been drawn to melding music and film in his own productions. He produced opera professionally in Chicago from 1999-2006; prior to that, he made two Super 8 short films in the early 1990s that were shown at the San Francisco International LGBTQ+ Film Festival. One of those shorts, I Dream of Dorothy, went on to festivals worldwide. In addition to filmmaking, Peter works as a nonprofit arts manager, which has helped him bridge the creative aspects of filmmaking with the more managerial aspects essential for production. Peter is the recipient of a highly competitive three year DeVos Institute for Arts Management International Fellowship. In 2018, Peter was also the recipient of a City of Chicago Public Arts grant for this film. His curatorial, managerial and fundraising experience have proven essential for this project.

Lucia Palmarini is a Chicago and Mexico City based producer, creative consultant and educator who has been working across education, in community and youth media, and independent film for over ten years. Ms. Palmarini strives to connect the bridge between vision and strategy, program and process. Whether producing a film, event, or community initiative, Lucia aims to bring people together to connect, create and to unlock their potential individually and collectively.

Peter Schulman is a filmmaker, artist, and teacher based in Los Angeles. He has worked with various non-profits, including Free Arts Los Angeles and The Children’s Institute. His non-fiction work is driven by curiosity and built on mutual vulnerability with his subjects. Peter also works with sculpture, digital collage, and photography. He is currently shooting his first feature-length non-fiction film, With Ben.

Dan Savage is an author, an advice columnist, a podcaster, a pundit, and a public speaker. Savage Love first appeared in The Stranger, Seattle’s alternative weekly, in 1991. The column is now syndicated to more than 50 papers across the United States and Canada. Dan has published six books. In 2010 Dan and his husband Terry Miller founded the It Gets Better Project (IGBP), which has gathered thousands of videos from people all over the world offering hope to LGBT kids. In 2012, IGBP was awarded an Emmy. Dan is a regular contributor to This American Life. He has also been a frequent guest on The Colbert Report, Real Time with Bill Maher, and other television programs. Dan’s graphic, pragmatic, and humorous advice has changed the cultural conversation about monogamy, gay rights, religiosity, and politics.

John McDowell is an in-demand film composer and multi- instrumentalist. He created the soundtrack for the Academy Award winning documentary, Born Into Brothels, which also won Best Musical Score at the Bend Film Festival. His dance scores have been featured at the Brussels Dance Festival, the Holland Festival, and the Berlin- Amsterdam Festival, and he has performed at major venues and festivals including the Montreal Jazz Festival, Lincoln Center Out-of-Doors, and the United Nations. He has written over 100 pieces ranging from solo flute music to dance scores, a requiem, and works for a world music ensemble and orchestra.

Make a donation to Jimmy in Saigon.