A drama about the kind of teacher who saved your life...

A group of dedicated Public School Teachers roll up their sleeves and fight for their students’ lives – plus their imaginations and school supplies – as they question the value of their life’s work and mentor a naïve new English Instructor – all during parent-teacher conference week.

From the outside, University High is the kind of public school that most white families would never consider. But inside it’s home to a set of educators and students, with lives as rich as any history lesson. A truth that becomes exceedingly clear during Parent-Teacher Conference Week.

Olive Lambe, a gifted English teacher wonders why she traded her dream of writing her magnum opus to be a teacher. Lambe’s colleague, Angela Walker forces her to prepare for parent-teacher meetings ahead. Newbie Matilda Croy arrives and becomes an immediate thorn in the side of more experienced educators.

We watch the seasoned staff connect with the hearts of students’ families over sixteen revelatory parent-teacher conferences. Lambe prevents a messy custody battle from hurting a star student’s college prospects, as Walker facilitates a father’s relationship to his transgender daughter. As the teachers help families with seriously pressing issues, Croy learns the comprehensive realities of teaching.

As we discover that the destiny of these students is as arbitrary as a lottery ticket, a random gunshot leaves one student dead and Lambe inconsolable. Weeks later, she bumps into a former student who quotes Lambe’s words of wisdom, words that changed his life 35 years before. She realizes her magnum opus has written itself and is standing right before her.

Make a donation to Parent-Teacher. 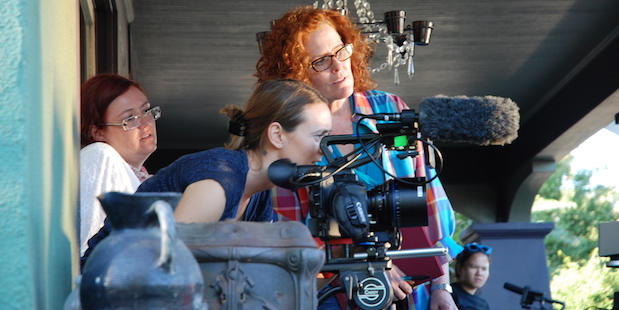 Angela Garcia Combs is an award-winning writer/director who focuses on the female perspective while maintaining a light touch, a sharp wit and an accessible style. Her work has been highly regarded for its unique point of view and skillful craft, earning accolades in film reviews and receiving multiple awards, including Best Director at The Female Eye Film Festival; Best Feature at The Philadelphia International Film Festival; the Audience Award at Iowa Independent Film Festival; the Henry Jaglom Award for Creative Excellence in Direction. Garcia Combs’s feature film, Nothing Special, was curated by the Academy of Motion Pictures Arts and Sciences into its Permanent Core Collection and marks Karen Black’s last starring role. Nothing Special had a domestic theatrical release and is now available on Hulu and Amazon.

Meredith Riley Stewart is an actor, producer, and content creator. She was tapped by Women In Film to create their first-ever digital series, Flip The Script, a comedy about gender parity. It has over 9 million social media impressions and is gearing up for its second season. The mash-up comedy short fan film she produced, Orphan is the New Orange, has over half-a-million YouTube views and toured the globe as part of ComicCon. Her digital series AutocorrectFU was featured on Funny or Die and Whohaha and includes cameos by major YouTube stars. Her newest project, a feminist VR experience entitled See Me is currently on the festival circuit. An executive member of Women In Film, Meredith serves on the Business Affairs committee of the PSA program where she produced the Telly Award-winning spot for River LA. Above all, Meredith is passionate about utilizing film as a platform for social change.

Asher Huey is a DC-based progressive organizer. He’s an assistant director in the Communications Department of the American Federation of Teachers, where he crafts digital campaigns for one of the largest public education organizations in the US. He works with various progressive organizations and coalitions to create substantive change on both local and national levels. He’s particularly active in the areas of LGBT rights, education, labor, environment and social justice. Over the years he has worked on various electoral and issue-based campaigns. He was one of the lead organizers for the Food Truck Association of Metropolitan Washington. He’s on the national executive board of Pride At Work. His background in theater and film, along with his current work creating public messaging, all fit squarely into the wheelhouse of purpose-driven filmmaking. He has a theatre degree from American University.

Nancy Schreiber ASC is an award winning cinematographer who received the 2017 ASC President’s Award, the first woman to receive this honor. She was the fourth woman ever voted into membership at the American Society of Cinematographers. In addition to serving on the ASC Board of Governors, she was on the board of Women In Film (WIF) and is a member of the Academy of Motion Picture Arts and Sciences. Schreiber has taught advanced cinematography at the American Film Institute and, between shooting, continues to guest lecture at film schools in California, New York, and around the world. Schreiber’s extensive and eclectic list of narrative film and television credits as well as commercials, music videos and documentaries can be found on IMDB.

Make a donation to Parent-Teacher.