What happens when a boy and his brother go in search of their missing mom?

What happens when a boy and his brother go on a road trip in search of their missing mom? Sam Now follows Sam Harkness from age 11 to 36, as his once-average family becomes heartbroken and wracked with questions after his mother suddenly abandons them.

Sam Harkness and his Seattle family are shocked and heartbroken when his mother suddenly disappears. Tracking cryptic clues of her whereabouts years later, Sam and his half brother head out on a West Coast road trip to try and find her. But solving the mystery of her disappearance is only the beginning of their story.

Through Sam’s 20-year quest for answers, the film explores intergenerational trauma and the turning points of family dysfunction and healing. As the narrative unfolds, we witness Sam coming of age as he tries to break free from a singular traumatic event, one that has replicated itself in his family for generations. Sobering revelations of personal growth blend with playful home movies and vibrant experimental filmmaking by brother and director Reed Harkness. A rare vulnerability reveals their journey as relatable to the modern American family.

We are there with Sam as he grows up, immersed in a unique archive of vintage films, home videos, intimate family interviews and vérité scenes from over the decades. We see him take a 2,000-mile road trip in search of answers. We learn of his mother Jois’ difficult past and why she left her kids. We feel the ripple effects of these individual decisions on family members including his brother Jared, father Randy and grandma Doris. And we discover the intertwined coping mechanisms that have contributed to a cycle of abandonment and avoidance.

The film balances heavy themes and emotional reckonings with youthful energy and
optimistic spirit. These vivid moments serve as a contextual lens for the audience to
reflect on their own personal lives, becoming a catalyst for open communication
and fostering an atmosphere of honest understanding in our relationships.

Make a donation to Sam Now. 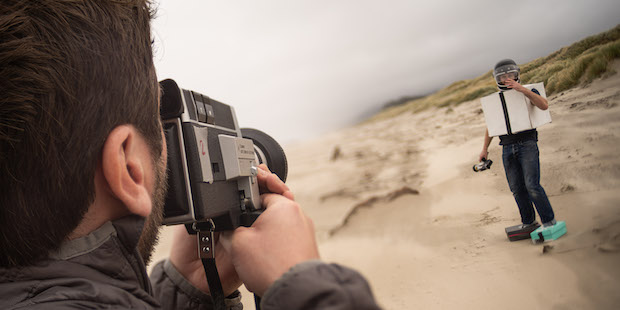 Reed attended film school in his backyard and garage. At age 18, he began making a series of short films starring his younger brother Sam. This was the beginning of a project two decades in the making: Sam Now, a coming-of-age film that follows his brother from age 11 to 36. The film was selected by ITVS Open Call and is now in post-production. Reed previously directed the award-winning 30-minute documentary Forest on Fire about the 2017 wildfire in the Columbia River Gorge started by a teen who threw a lit firecracker off a hiking trail–stranding more than 150 hikers–and how, much like wildfire, a news story can spin out of control. He created House on Fire for Topic Studios, a series of short documentaries where people are given the spontaneous prompt that their house is on fire and told they have only two minutes to save just one thing. Reed recently participated in Gotham Week’s Project Market: Spotlight On Documentaries and was selected as a Film Independent Fellow. He was also awarded the Oregon Media Fellowship for 2021.

Jason is an award-winning editor, producer and director. He directed and produced the Emmy award-winning Man Zou: Beijing to Shanghai and the Webby award-winning Sonicsgate: Requiem for a Team, which aired on CNBC and ESPN. He also produced and edited the feature documentaries K2: Siren of the Himalayas and Evergreen: The Road to Legalization, which both streamed on Netflix, and Dirtbag: The Legend of Fred Beckey, which won 26 awards at film festivals. In 2020, he won his second Emmy for the short documentary The Original Voice of the Seahawks. He directed and produced Backfire: How to Destroy a Presidential Candidate and The Ultimate Upset for ESPN Films/FiveThirtyEight. He also edited the award-winning feature documentaries Crazywise and The Weight of Water and co-produced and edited Reed Harkness’ Forest on Fire. In 2020, he also edited the doc series House on Fire and directed three episodes of the travel/adventure doc series, The Wizard’s Eye. He is also producer of Super Frenchie, a feature documentary that was released by Greenwich Entertainment in 2021 and will air on National Geographic in 2022. Jason recently participated in Gotham Week’s Project Market: Spotlight On Documentaries and was selected as a Film Independent Fellow for the ITVS funded feature documentary, Sam Now.

Darren Lund is editing Sam Now with producer/editor Jason Reid. Darren is an editor on many award- winning films including Sonicsgate: Requiem for a Team, Man Zou: Beijing to Shanghai, K2: Siren of the Himalayas, Evergreen: The Road to Legalization, The Finish Line and Mr. Irrelevant. He edited Forest on Fire, Backfire: How to Destroy a Presidential Candidate and The Ultimate Upset for ESPN Films/FiveThirtyEight, edited the feature documentary Crazywise and the award- winning feature documentary Dirtbag: The Legend of Fred Beckey. Darren directed and edited three of the nine episodes of the travel/adventure doc series, The Wizard’s Eye and is currently editing Sam Now and a few other projects that will be released later this year.

Heather Hawksford spent half her time in college facilitating empowerment sessions in a maximum security juvenile prison and half her time studying photography. She spent years as a social worker and then as a portrait photographer, eventually discovering a way to meld her two interests together in the form of documentary photo and film production. Heather co-founded Motherist, a mother focused artist residency program in the Pacific Northwest which explores how the experience of motherhood informs our art and perhaps makes it stronger. She recently produced the award-winning documentary Forest on Fire about the 2017 Eagle Creek wildfire that burned a vast area in the Columbia River Gorge for Topic Studios. She also co-directed the documentary series House on Fire for Topic Studios in 2020. She is currently co-producing Sam Now.

Adam is a producer, writer, editor and music supervisor of diverse creative projects. He won a Webby Award as producer of Sonicsgate: Requiem for a Team. He produced Webby Awards Honorees The Finish Line and Mr. Irrelevant, as well as Backfire: How to Destroy a Presidential Candidate and The Ultimate Upset and Dirtbag: The Legend of Fred Beckey. He has produced and directed numerous commercials, music videos and short films including Mackie Driven Artists and The Nachomentary. A former journalist and musician, Adam lives with his wife and daughters in Seattle, where he runs the production company Lucid Visual Media. Adam most recently directed and edited three of the nine episodes of the travel adventure doc series The Wizard’s Eye and is currently co-producing Sam Now along with several other projects in development.

Make a donation to Sam Now.