Some bonds should never be broken.

Help independent filmmakers tell their stories.
Make a donation to The Bond today.

When an incarcerated pregnant woman goes into labor she must fight to stay connected to her baby in a system built to keep them apart.

Through the window of a nursery, ARIA (27 yrs) a woman with bright hopeful eyes watches a diverse group of mothers and babies play. The women are incarcerated; dressed in matching jumpsuits with CORRECTIONS stamped across the back. Aria’s own jumpsuit stretches over her large pregnant belly. Mrs. Lacey, a social worker approaches and Aria asks about the status of her application to be transferred into the prison’s nursery program. Mrs. Lacey has no information but assures Aria her request has a strong chance of being approved.

Later that night in the loud and chaotic prison, Aria confronts CECE (45 yrs), her drug dealing cellmate. Aria is serving time for opioid use and is working to stay clean. She is also building a reputation as a “model prisoner” for her nursery application. Aria tells Cece if drugs are found in their cell, her ability to see her baby after it’s birth will be compromised. Their argument ends in mutual threats. Later that night, Aria wakes to find that her water has broken.

At the hospital, Aria is shackled to a bed, her left wrist cuffed to the frame, her ankles attached to opposite ends of the bed. The chains jingle as Aria twists with every painful contraction. Nearby, OFFICER AMBROGI (50s), a by-the-book senior officer and his partner OFFICER MILLER (20s) chat about work. DR. SATTLER, a seasoned OBGYN with a warm manner enters. She asks Ambrogi to remove the shackles. He ignores her.

As Aria’s labor progresses and inhumane conditions worsen, Aria strives to protect her connection to her unborn child. Based on a true story, this character-driven drama sheds light on a growing yet often invisible demographic; incarcerated pregnant women.

Make a donation to The Bond. 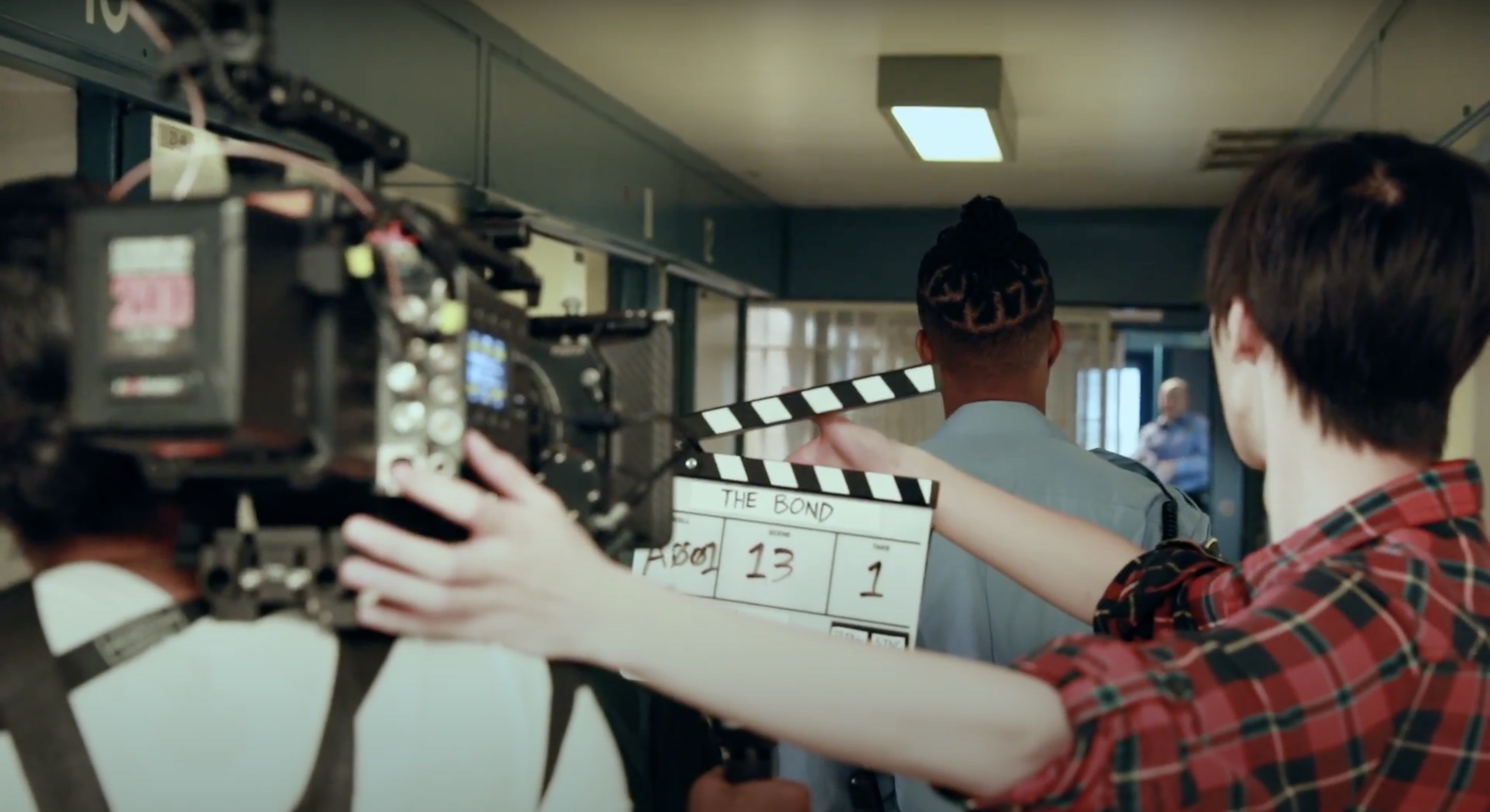 Jahmil Eady earned her BA in Media Studies from Pomona College and studied film at the Prague Film School in Czech Republic. She has been a documentary associate producer on projects for Oprah Winfrey Network, Viceland, and Discovery Networks. She wrote and directed Heartland (2020) and The Bond (In Post). Jahmil’s fellowships and awards include the New York Times Scholarship, Jackie Robinson Foundation Scholarship, Teri Schwartz Family and Friends Scholarship, and Four Sisters Scholarship from directors Gina Prince-Bythewood, Sara Finney Johnson, Mara Brock Akil, and Felicia D. Henderson. Jahmil is an MFA Directing candidate at UCLA.

Of mixed Italian and Chinese parentage, Selena Leoni grew up in a North Italian village and is a transnational producer. After completing her BA in New Media from the City University of Hong Kong in 2015, she spent the next three years working as a Multimedia Content Producer where she developed several Multimedia VR projects that focus on improving social inclusion in Hong Kong. Selena is a 2020 graduate of UCLA’s MFA
Producers Program. She is currently developing and producing multiple projects in film and television.

Born and raised in Japan and Spain, Reina Higashitani is a NY based producer with a passion for promoting diversity and inclusion in the arts and entertainment. She has produced and associate produced a number of independent films, TV documentaries, and commercials including Kusama-Infinity(Sundance), Academy Award-nominated documentary short Redemption(HBO), and a Tokyo Video Festival Excellence Award-winning documentary Shall We Sing?(PBS), which she also directed. Reina holds an M.A. in Cinema Studies from NYU and an M.F.A. in Film and TV Directing from UCLA.

Gionatan Tecle is an Italian Eritrean Cinematographer with a BFA in Cinematic Arts from the University of Maryland, Baltimore and an MFA in Cinematography from UCLA’s School of Theater, Film & Television. His latest works, World and Fixed Water were Official Selections at the Palm Springs International Film Festival. His awards include the Motion Picture Association of American Award, the Myrl Schreibman Fellowship, and the Steve Lawrence and Eydie Gorme Scholarship.

Make a donation to The Bond.