Shortly after the Nazi invasion of the Netherlands, a popular Jewish ice cream parlor owner, Ernst Cahn, finds himself targeted by the infamous “Butcher of Lyon,” Klaus Barbie. As his world crumbles, The Ice Cream Man must choose between resistance and death…a choice that will reverberate throughout the country. Based on actual events.

ERNST CAHN (51), the co-owner of the most popular ice cream parlor in Amsterdam, is horrified to discover he is being set up as a scapegoat by the future “Butcher of Lyon,” LT. KLAUS BARBIE (28). When Ernst’s desperate act of resistance leads to his arrest and torture, the public outcry sets off a chain of events that leads to the “February Strike,” the largest mass resistance against the Nazis during World War II.

Make a donation to The Ice Cream Man. 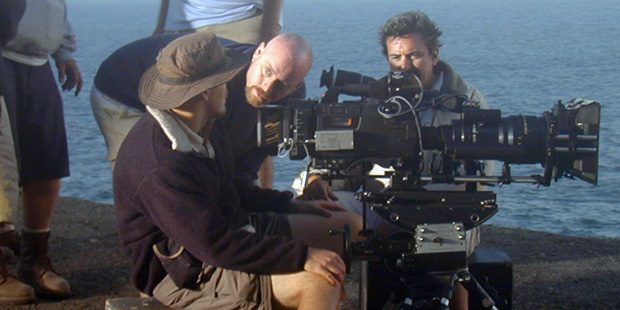 Robert Moniot – Writer/Director/Producer
Robert Moniot (pronounced Mon-Yo) is a writer/director/producer based in Los Angeles but currently living abroad with his U.S. diplomat wife and three diplo-kids. His first short film, The Dancing Cow, was purchased by Steven Spielberg. Moniot’s second short (and directorial debut), the satire Pearl Harbor II: Pearlmageddon, had its world premiere at the U.S. Comedy Arts Festival and was purchased by HBO. His first feature screenplay, Armageddagain, was optioned by New Line Cinema. After leaving the business for an extended stint as a stay-at-home-dad, Moniot is currently developing The Berlin Game, a WWII actioner about Bond creator Ian Fleming; Buckingham Boys, a heist comedy; and Seven Days of the Dragon, a cyber-attack thriller.

Gregor Wilson – Producer
Gregor Wilson has spent nearly thirty years working on film and television productions, initially in the art department, then finance and finally in production management and co-producing studio projects. His many credits include Denis Villeneuve’s Prisoners, Quentin Tarantino’s Inglorious Basterds, and Zach Snyder’s Justice League. Wilson’s directorial effort, the 2019 short Bewildered, won awards at film festivals around the world and is currently being developed into a feature film with The Wolper Organization.

Mark Doering-Powell – Cinematographer
Mark Doering-Powell’s cinematography bridges numerous styles and genres such as his early work on Everybody Hates Chris, for which he was nominated twice for an Emmy in outstanding cinematography. He has also lensed numerous other pilots such as Workaholics, Growing Up Fisher, Jane By Design, and My Boys. Doering-Powell recently shot 3 seasons of Grown-ish, which follows Zoey (Yara Shahidi) through her college years. In 2021 he received an Emmy nomination for outstanding cinematography for the episode “Know Yourself” directed by Jenifer Rice-Genzuk Henry. Mark also lensed the Kenan Thompson pilot, directed by Chris Rock, as well as 4 seasons of Just Add Magic for Amazon. Doering-Powell lensed several early digital projects such as Pearl Harbor II: Pearlmageddon, and WB’s Family Affair. He is honored to be a member of the American Society of Cinematographers, as well as the Academy of Television Arts & Sciences and one of the early members of the Visual Effects Society.

Mark Snow – Composer
Brooklyn-born Mark Snow has been writing scores for film and television ever since his foray into rock n’ roll with fellow Juilliard graduate Michael Kamen failed to hold his interest. Scoring a range of series from Hart to Hart, Kojak and Dynasty to La Femme Nikita, Smallville, and Blue Bloods, Snow found his place in television, recording and indeed cultural history with one particular project — The X Files. Having stumbled upon that iconic echo effect by mistake, Snow developed the chart-topping theme tune of The X Files with creator Chris Carter and went on to score the music for entire series including both cinematic feature films. Snow is the only ASCAP composer to win the “Most Performed Background Music” award every year since the awards began in 1985, he has received 14 Emmy nominations, and is the only composer to score three films for acclaimed French director Alain Resnais.

Todd Sheridan-Perry – Visual Effects Supervisor
Todd Sheridan Perry is a classically trained artist as well as both a traditional and digital animator. His diverse background in film, television and video games has led him to play key roles in projects ranging from Lord of the Rings: The Two Towers to recent blockbusters including Avengers: Age of Ultron, Black Panther, and Doctor Strange. He is currently working on the TV hit For All Mankind. Perry won an Emmy for his work on the mini-series The Triangle, while working with Award winning supervisors Volker Engel and Marc Weigert. He was also nominated for a Visual Effects Society Award for The Kite Runner while working with CafeFX. Perry writes for both Animation Magazine and Digital Media Net, reviewing both software and hardware used in the visual effects industry. He received his BFA at Pacific Lutheran University with an emphasis in 2-dimensional media, which included illustration, painting, photography and digital media. He resides in Seattle, WA focusing on writing and developing film projects, while making frequent trips to his other residence in Venice, CA to consult on visual effects projects.

Make a donation to The Ice Cream Man.