The Residents of 8265 Oakland Ave.

Help independent filmmakers tell their stories.
Make a donation to The Residents of 8265 Oakland Ave today.

The Residents of 8264 Oakland Ave is the story of a queer, chosen family, in Milwaukee, whose home is bought out to be a strip mall.

The Residents of 8264 Oakland Ave is narrative feature film that tells the story of a queer, chosen family, in Milwaukee, whose home is bought out to be a strip mall. Being evicted forces them to make choices sooner than they anticipated in their careers, love lives, and friendships. Residents is a project born out of the desire from our cast and crew to see themselves and their stories told on screen.

Make a donation to The Residents of 8265 Oakland Ave. 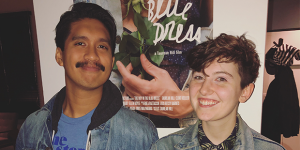 Rhea Bozzacchi is a queer filmmaker based in Los Angeles, whose mission is to lift up marginalized voices through the power of storytelling. Their latest short film, Boihood, screened at several festivals nationally and internationally, and premiered at Outfest Film Festival 2018. When it comes to Rhea’s day-by-day, they can be found video editing at Dark Burn Creative to survive financially, playing drums to survive mentally, and humming Alanis Morrisette to survive emotionally. For film directing portfolio, please visit www.rheabozzacchi.com.

Molly Ragen is an actor, producer, and teaching artist born and raised in Chicago, Illinois. She attended Columbia College Chicago, graduating with a degree in Theater. Since moving to Los Angeles, she continues to study at The Imagined Life and also teaches musical theater at The Youth Academy of Dramatic Arts. She has acted in and produced several short films, including Boihood, which was an official selection at Outfest Film Festival.

Mike Maliwanag is a Filipino American cinematographer based in Los Angeles. His work has been featured at the Sundance Film Festival, Los Angeles Film Festival, Outfest, and other festivals across the world. In 2019, he was accepted into the inaugural American Society of Cinematographer’s Vision Mentorship Program. The following year, he was nominated and received the Best Cinematography award for the feature film, In the Land of Lost Angels at the Queens World Film Festival. He strives to shoot films for underrepresented communities. When not shooting he likes to travel and eat food from different parts of the world.