In this special guest post originally published in 2020, Michael Govier and Will McCormack talk about the making of their Best Animated Short winner If Anything Happens I Love You. The short is currently available to stream on Netflix.

We met in the most unlikely of places: an acting class in the Valley. We became fast friends. And since we’re both writers, we would meet in the park for avocado sandwiches to volley new ideas, as writers do. We were both interested in writing about grief and wrestling with the loss in our own lives. We’re both fascinated by how human beings grieve—how we face it, endure it, survive it and hopefully, prevail.

During one avocado sandwich, Michael pitched an idea about shadows, and how shadows in our story could represent the feelings that the characters could not reach because they were consumed with pain. This was our jumping off point. Will loved this Jungian visualization—connecting with our shadow-self is uncomfortable and often agonizing, but essential to our survival, healing and growth. It immediately ticked two story boxes, theme and animation. We could both feel it and see it instantly. This was the beginning of If Anything Happens I Love You.

Again and again, we read about the senseless, horrific gun violence that kills children in our country. We felt called to write about this tragedy. How do you face the loss of a child? How does one survive that unthinkable pain? We found this proverb: “When your parent dies, you bury in them in the ground. But when your child dies, you bury them in your heart.” We pinned it to the top our story corkboard and got to work.

This is very serious material. So, we took it seriously. We knew we had to get it just right. We spent about a year on the script, which is only 12 pages. We would not have the luxury that Will had at Pixar, where he worked for years developing story ideas [including Toy Story 4 -ed.] that emerged from the artwork. We did not have that time or money when it came to production. We needed a tight script, so we wrote one.

We then did more homework by watching and re-watching about 100 animated short films. We broke them all down, what worked, what didn’t and what inspired us. That research led us to finding our film’s style. We knew we wanted it to be 2D, spare and lean, inspired a lot by Michael DuDok de Wit’s gorgeous Oscar winning short “Father and Daughter.” We talked endlessly about color. Monochromatic at the top, and then slowly build in color, but through the lens of grief. And we knew we wanted no dialogue. The story could work perfectly, better, without it. We talked about how music would carry the film.

We finished the script and had a clear vision of the style. Now we needed a producer. An experienced one. Will called his agent Keya Khayatian at UTA and he introduced us to Maryann Garger, who has worked in animation, prolifically, for over three decades. Maryann said “yes” immediately and has been the film’s guardian angel, tireless producer and veteran leader. When making a movie, sometimes you get lucky. And we were really lucky to meet Maryann.

Then we needed money. And we couldn’t find any. We went to every studio in town, and everyone said no. So, we did what any reckless independent filmmaker does: we decided to finance the animatic ourselves.

We contacted Maija Burnett at Cal Arts, sent her the script and asked her to connect us with artists who may be good fit. Which is when we had our second stroke of wild good luck. We met Youngran Nho, who is an absolute star. We met her over avocado toast this time. She immediately understood the depth of feeling, style and tempo. We were astonished and delighted by her art.

Maryann connected us with the master editor Peter Ettinger who graciously jumped on board. The last piece we were missing was our composer. We landed Lindsay Marcus, who is supremely talented. Lindsay’s delicate, thoughtful and driving score was a big piece to the puzzle. 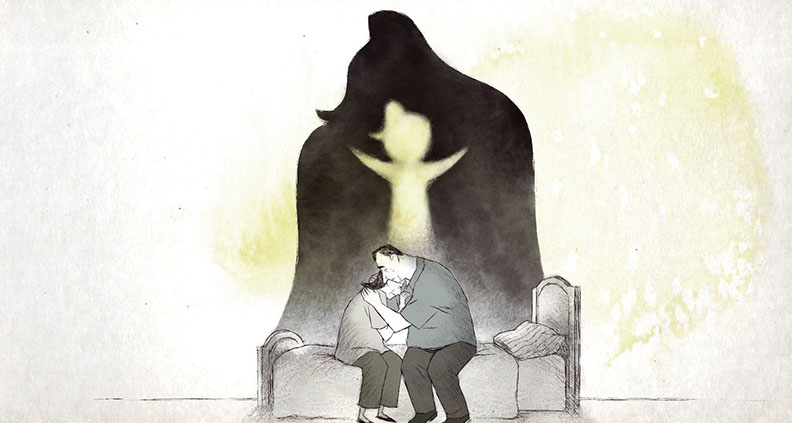 With the animatic in hand, we held a fundraiser at UTA. Gary Gilbert of Gilbert Films was in attendance. Gary was so moved by the film, he made production possible through the Fiscal Sponsorship at Film Independent. We had enough money to complete the film. With Film Independent and Gilbert Films, were able to hire two other animators Haein Michelle Heo and Julia Rodrigues, who worked beautifully with Youngran.

The filmmaking process was exhilarating. Our all-female animation team was knocking it out of the park. We established a cardinal rule, which was that anything that did not need to be in frame shouldn’t be. We kept making the film leaner and tighter. Stripping it to its essential elements. And it was working.

Then the great Laura Dern came on, as did her brilliant producing partner Jayme Lemons. We connected with Everytown For Gun Safety, who endorsed the film and became our champion.

Everytown and Laura Dern hosted a screening of the completed film at UTA. At that screening survivors of gun violence attended, as were parents were there who had lost children to gun violence. It was the most rewarding moment of our careers because the film spoke to them. We had captured loss and its aftermath. Hopefully, this story can provide connection and communion. We felt that that night.

That night was March 4. On March 7 we flew to the Omaha for our only in-person festival screening. We won best animated short. We were very excited to continue on the film festival circuit.

We are still in the midst of so much loss and pain and grief. The film has done and is doing well on the festival circuit and this year it has been virtual, drive-ins and socially distanced events. We have played at 38 film festivals in a pandemic. We were delighted to have won the Oscar Qualifying Grand Jury Prize at the Edmonton International Film Festival. We wish could have been in person at all of them, nonetheless we are grateful for the wonderful response the film has received.

The next blessing the film received was Netflix wanted to watch it. After screening virtually at Netflix, Gregg Taylor and the good people over there acquired it. Now the film is streaming on Netflix for over 200 million see.

Film Independent made it all possible. We are grateful to them, avocados and all the people who have shared their pain, grief and LOVE with us. By sharing it, it binds us and makes us stronger as a human race. For more information about the film, please visit our website.

VIDEO: What a Location Manager Does… and Why You Need One