Can you really stray from your home & family?

To prevent his oldest brother from drinking himself to death, Ronan Connolly must seek help from their estranged priest brother, leading to an unexpected family reunion with their long-lost sister, and a botched intervention.

As Kier’s lone caretaker, Ronan is fiercely loyal to the brother who raised him, sincerely means well, and doesn’t even recognize what he’s doing. All Ronan knows is that he’s using his hard-earned money to keep Kier sustained with the only things he’ll consume – booze, cigarettes, and pizza bagels – because his stubborn brother is unwilling (and increasingly unable) to venture out from their family’s tenement apartment in Chelsea, Massachusetts, a multi-cultural enclave directly across the Mystic River from Boston.

In many ways, though, this arrangement suits Ronan just fine, using it as the excuse to why he never finished high school or made something of himself. Not to mention that being constantly responsible for Kier allows Ronan to self-justify his own free-wheeling tendencies when it comes to jobs, women, and partying!

But with Kier hitting the bottle harder than ever, and Ronan desperately trying to ignore his brother’s onset of dementia, Ronan is forced to face reality when he catches Kier having a “conversation” with Fiona, the baby sister they gave up for adoption decades ago.

This sight, combined with a toilet full of bloody vomit, compels Ronan to very reluctantly seek help from their estranged brother Mickey, an Episcopal priest in Los Angeles who left Boston 15 years earlier and never looked back.

Father Mickey returns home with a surprise guest on November 1st – coinciding with the Catholic All Saints’ Day feast holiday – intent on immediately getting Kier into rehab. This impromptu family reunion leads to the resurfacing of all the old tensions and a botched intervention, leaving everyone questioning how far you can ever really stray from your home and family.

Make a donation to All Saints Day. 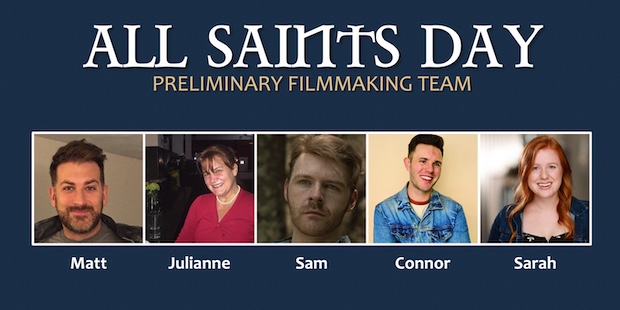 Matt is a filmmaker, theatre director, producer, and writer. As a filmmaker, Matt secured financing to produce and direct An Eye For An Eye (2004), a short film starring Academy Award Nominee and Golden Globe Winner Sally Kirkland. The film had a successful festival run and secured an international distribution deal. Additional festival-bound shorts include Voodoo Love (2007), Demonic Attachment (2016), Playdate (2018) – which was acquired by the streaming platform IndieFlix – and his latest short, Brothers on a Motel Bed, is just entering the festival circuit.

For the stage, Matt has directed and produced several world premiere plays and readings. He is particularly proud to have directed the Off-Broadway premiere of the one-act play, With Love, and to have worked as a Teaching Artist with Disney Musicals in Schools.

He began his entertainment career as an assistant to acclaimed producer Lawrence Bender at A Band Apart, his production company with Quentin Tarantino, and he gained tremendous behind-the-scenes insight into show business during his tenure as a Corporate Communications Coordinator at Disney.

Matt directed the staged reading of the play on which All Saints Day is based and is excited to bring the story of the Connolly Siblings to the screen.

Julianne is a screenwriter, playwright, performer, director, and musician. She earned her MFA in Playwriting from UNLV and has gone on to write a number of full length and one-act plays and musicals. She also spent seven years on The Late Late Show with Craig Ferguson.

Julianne’s original stage play, All Saints In The Old Colony – of which Matt Aaron Krinsky directed the initial staged reading and on which the All Saints Day film is based – was a 2015 semi-finalist at the Eugene O’Neill Theater Center and in 2016, it won the NewWorks@TheWorks Playwriting Competition. A fully-staged production of the play had its world premiere in January 2018 at Playhouse on the Square in Memphis and went on to win several awards.

Julianne and All Saints Day director Matt Aaron Krinsky have a long history of collaboration. Matt’s short film Playdate was adapted from another of Julianne’s plays and she served as a producer on that film. She then went on to be an Associate Producer on his short, Brothers on a Motel Bed.

Sam is an Emmy Award-Winning Filmmaker who grew up in New England. He specializes in cinematography, post-production and producing. He loves all aspects of the art and craft of bringing stories to the screen, with a fondness for light, captivating images, epic framing, textures, and layers.

He won an Emmy as Cinematographer and Editor for the PBS Documentary, Orchard House: Home of Little Women.

Having served in various crew positions on many notable Hollywood productions, Sam is especially proud to have worked on three feature films that won Academy Awards: The Departed (2006), Inside Job (2010), and Little Women (2019).

Connor is a freelance Film Editor & Videographer in Los Angeles who’s worked on a wide range of projects, including short films, music videos, and online content. He is also the co-host of the podcast, What’re We Watching?, which is now streaming on all podcast platforms. Connor and All Saints Day director Matt Aaron Krinsky have previously collaborated on the short film, Brothers on a Motel Bed.

Sarah is a Los Angeles local who started working in Casting in 2019. She spent 3 seasons as the Casting Assistant on ABC’s The Goldbergs and worked on the Amazon streamer, With Love. She enjoys working closely with actors and producers and looks forward to every new and exciting project.

Make a donation to All Saints Day.