Through good times and bad, a couple must face one question.

Help independent filmmakers tell their stories.
Make a donation to Are You Ready? today.

A man takes his wife on a trip down memory lane if only to share a few moments of lucidity in her battle with Alzheimer’s, showing how love can transcend time and tribulations.

Are You Ready? a simple question that takes on a whole new meaning every time it’s uttered in this dramatic short film. Set in present day Los Angeles, a cab driver whose cab and his shabby clothes have seen better days prepares to pick up his next client. When he arrives at the nursing home, he is greeted by the nurse and the special cargo, his wife. As they journey around town, he hopes to catch a glimpse of the woman he once knew. While stopping near an old haunt, his wife suddenly awakens and hurries inside. The man rushes to aid his wife, fearful of what she will come across if left alone. Once crossing the threshold, the man is taken back in time when his mind and his clothes were sharp. There he meets the woman he fell in love with to the tune of a familiar song and the first dance they shared in that magical place. Young and eager for all that’s ahead of them, the couple rushes together to face their future and out into the world. A world that returns them to their current state, one of brief moments of lucidity and anguish. The moment passed, the man takes his wife back to the nursing home. As they say their goodbyes, a sudden fall and quick response causes yet one final moment of hope and love as the man is reminded one last time, Are You Ready?

Make a donation to Are You Ready? 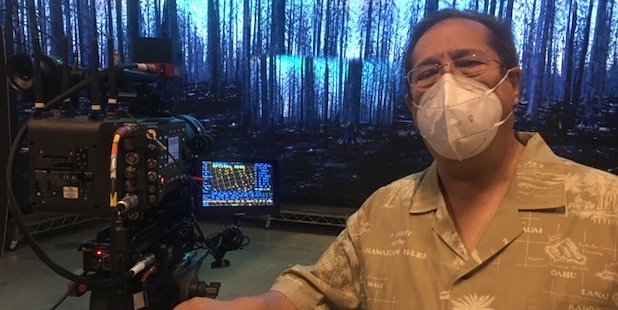 Laura Walker – Writer
A gal from Kalamazoo, Michigan, Laura is an actress/singer/dancer/writer/producer who is passionate about the performing arts and sharing those experiences with an audience. An alumnus of AMDA- NYC and a theater rat at heart, Laura has appeared in various commercials and is proud to have been featured in the films: Why?, There Will Always Be Christmas, Helpless, Devils in Disguise, Experiment in Torture and as “Most Likely to be Stabbed” in a NYC subway campaign. Not one to sit on the sidelines, Laura was also the lead and producer of the films Fancy Meeting You Here, 3 Day Walkers, and her web series, 2 Broke Bees. She is constantly working on creating new content that is fresh and exciting.

His present goal is to collaborate and forge a movie that will earn an Academy Award nomination.

Leilani Turner – Producer
Leilani Turner is a producer and actress, known for D-Railed (2018), Suzanne’s Saturday Night Scares and Gym Rat. Starring in an episode of Suzanne’s Saturday Night Scares, alongside Sally Struthers, and a supporting role in D-Railed, Leilani is more than just a horror enthusiast. She recently helped produce, Middleton Christmas which was honored with a Dove Award and saw its big release during last year’s holiday season. Always on the go, Ms. Turner has many more projects coming down the pipe, so watch out.

Sally Struthers – Lead Actor
Sally Struthers became a part of TV history as a member of a dysfunctional family quartet in the sitcom, All in the Family (1971). Following that accomplishment, her career has included numerous appearances spanning television, films, Broadway, touring theater, and voiceover work.

Into the millennium, Sally has guested on such series as Sabrina, the Teenage Witch and The Division, had recurring roles on Still Standing and Gilmore Girls, and was seen in featured roles in films A Month of Sundays, Reeseville, Baadasssss!, Monster Heroes, Waiting in the Wings: The Musical, Hollywood Musical!, Still Waiting in the Wings and Christmas Harmony.

Joe Estevez – Lead Actor
Born the last of ten children to an Irish immigrant mother and a Spanish immigrant father, Joe was raised in Dayton, Ohio to be a factory worker but he had other plans for himself, and two hundred and thirty some films later Joe feels his decision was correct.

Through perseverance, faith and talent Joe has become one of the busiest actors for one reason: He is one of the best at what he does. Joe can be seen on the T.V. series Hollywood Joe, hosts the Faith Film Festival, and author of the book Wiping off the Sheen.

Lisa Zambetti – Casting Director
Originally from the Bay Area, Lisa spent over a decade in NYC as an actress on Broadway and Off, writer, director and producer for many award winning theatre companies. After a long time learning the ropes from multiple award winning casting directors, Lisa moved on to the world of procedural drama where she was an associate and later head casting director on CBS’ long running show Criminal Minds, as well as co-casting director on the spin-off Criminal Minds: Beyond Borders.

Lisa is an active member of the Casting Society of America where she serves as the Chair of the Artistic Development Committee. In addition to casting, Lisa is a successful podcaster who co-hosts the award winning True Crime podcast Real Crime Profile on the Wondery network. Lisa uses her podcast platform to be a victims’ advocate, particularly for children who have suffered from mental, physical and sexual abuse.

Dwight D. Campbell – Gaffer
Dwight D. Campbell’s career as a lighting pro stretches back more than three decades. He worked on Backdraft, Far and Away, The Abyss and Torch Song Trilogy. Dwight grew up in Michigan and majored in film at the University of Michigan. His career began on documentaries for the National Endowment for the Humanities. After a long stint lighting motion control and title work, Dwight gaffed three Oscar-nominated films in various categories.

Dwight has consulted for Disney, Robot Chicken, SuperMansion and Buddy Thunderstruck, and many others. Dwight’s latest projects include Hunger Games: Mocking Jay, Grey’s Anatomy, and Emergency:LA.

Eamon Shannon – Grip/Lighting
The art of grip and lighting is a matter of achieving grace in the midst of chaos. Making the effort for excellence is achieved through a strong foundation of preparation, communication and skill of a craftsman in a team effort. It is the last three percent of work that makes it worthy of recognition. It is not always achieved, but it is always worked towards.

Make a donation to Are You Ready?