A POW aboard a roaming dieselpunk labor camp is cornered on his last day by a radical mycologist who claims to possess the secret to saving their war-ravaged world.

A POW aboard a roaming dieselpunk labor camp is cornered on his last day by a radical mycologist who claims to possess the secret to saving their war-ravaged world.

Ekelbrode opens on a man named Cadulbrockt who is serving a sentence aboard a reclamation wagon, a machine that roams the bitter plains, fertilizing the land after it was devastated during a catastrophic civil war.

It is Cadulbrockt’s last day of imprisonment.

That night, Malta, a former mycologist, waits in his cell. She reveals that she is serving a life sentence because she used to work for the rebels developing sparocktinum, a secret fungus that could heal the destruction caused by the war. However, when the rebels lost the war, they ordered her and her research to be destroyed. But she escaped.

Now, her work poses a threat to the business interests of her captors. If she were to reveal her secret she would be silenced for good.

It becomes clear that Malta has an ulterior motive and that she is using liquor to lower Cadulbrockt’s guard. She succeeds, driving him into a series of traumatic flashbacks laden with guilt and shame.

In the penultimate scene Malta confronts Cadulbrockt. We learn that he and his unit carried out the murder of Malta’s colleagues under the false pretense that she was a traitor. Now she’s here to ensure that they did not die in vain.

Cadulbrockt panics. Malta attacks him and injects a cyph-wire containing sparocktinum into his arm endowing him with the task of delivering the spore and saving their world.

Make a donation to Ekelbrode. 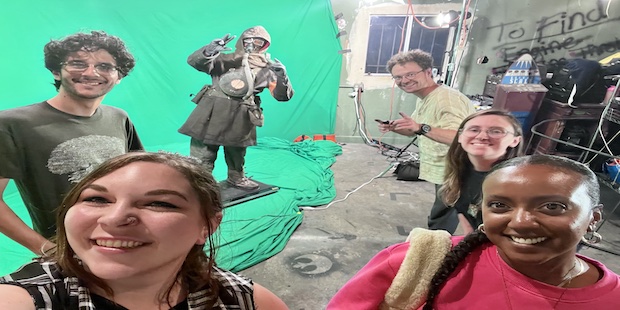 Salem Daniel – Producer
Salem Daniel is an Ethiopian American director and producer based in Los Angeles specializing in short-form content that points the lens at Black and female-centered narratives.

Salem’s film career started at VICELAND where she worked in production on the award-winning docuseries My House. She most recently co-directed the poetic documentary God is A Black Woman, a multimedia feature-length piece that showcases the journey of eleven Black women in their realization of the divinity of self. She has since produced with companies such as XTR, HBO and HOORAE.

Make a donation to Ekelbrode.