A new pandemic brings back the ghosts of previous ones.

A modern day poet muses on how the AIDS crisis prepared him for Covid, and opened the gates of grief for healing. His own poetry found in an old notebook unearthed during Covid, brings the AIDS crisis to life, with all its sadness and fierce friendships. Political activism and art meet in this window into the past.

During the long months of Covid lockdown, many people found themselves cleaning out their homes. Poet Jim Gaynor sure did: he found an old notebook, tattered and full of scribbles and old phone numbers. Inside that modest flip book he discovered notes on the 38 memorial services he oversaw during 11 years of the AIDS crisis in NYC. He noticed that some of the entries also had stars on them, which he realized meant that he had written poems on those particular memorial services, friends, or events surrounding their passing. He assembled 20 of those poems into his latest book of poems, I’ll Miss You Later. 3 decades later, he has some perspective on how to deal with grief and pandemics, through the poems he stumbled upon in that well worn notebook.

Make a donation to I’ll Miss You Later. 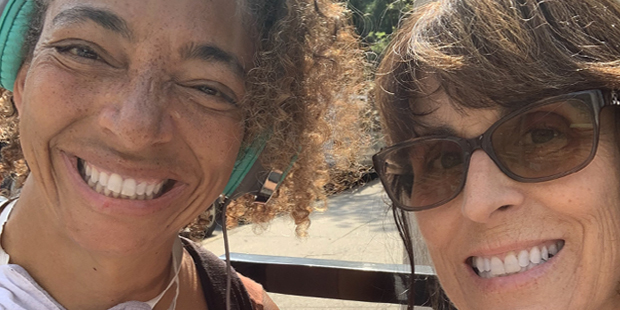 Annie O’Neil began making films in high school, alternating between directing and starring in both original works and classics. In 2009 she walked the Camino de Santiago as a featured subject in the award winning documentary Walking the Camino: Six Ways to Santiago. In 2014 she began shooting Phil’s Camino, a short documentary about a man with stage 4 cancer who dreamt of walking the Camino. That film was nominated for a Grand Jury Prize at SXSW in 2016, and went on to win over 20 awards at film festivals over the next year and a half. In 2018, the longer version of the film, Phil’s Camino: So Far So Good won Best Documentary World Premiere at the Heartland Film Festival. Annie is continues to explore story telling and the art of filmmaking with her new films, I’ll Miss You Later, about a poet in New York City, and Tucker & Amos, two old dogs reminiscing over good times past.

Samantha’s mother was gifted a brownie camera as a young adult and began documenting every waking moment of life, Samantha was soon to follow. Samantha spent years as a photo assistant and digital tech to some of the top image-makers in the business, all while shooting on her own. Since then, she’s incorporated more motion/video to her image-making, going out not only as a photographer but also as a Camera Operator/DP. She has shot all over the world and has created the online journal and travel show www.BrownPassport.com. In 2015 she began training to shoot underwater and received her PADI divemaster certificate in 2018. She’s based out of New York City, though she has lived and worked in Chicago, New Orleans, Miami, Philadelphia, and spent a few months living and shooting in Hawai’i, and Indonesia.

Will Allen started making super-8 disaster movies at the age of thirteen in Southern CA. He graduated from SMU, in Texas with his broadcast/film degree. His unique journey as a filmmaker was documented in Holy Hell, his 2016 debut documentary which was executive produced by Jared Leto, competed in Sundance Film Festival for Grand Jury Prize, was bought by CNN and Netflix and earned 2 Critic’s Choice Award Nominations.

Allen’s experience as both a documentary film editor and director, lends a unique vision and story-telling sensibility to his work. His strengths lie in telling personal, complex narratives in an emotionally compelling way. Will is an advocate for personal freedom, dedicating his time to education and self empowerment. He currently lives in Santa Monica, CA. and still loves disaster movies.

Make a donation to I’ll Miss You Later.