No Word For No

Everything against them but nothing stopping them...

Help independent filmmakers tell their stories.
Make a donation to No Word For No today.


Film Independent’s Fiscal Sponsorship program opens the door to nonprofit funding for independent filmmakers and media artists. Donate today and help bring No Word For No to life.

Youth in Indonesia are poised to become the majority of their country’s population by 2020. Despite unprecedented death tolls in the wake of environmental disasters, they remain resilient. No Word for No explores the question: how are the young people of Indonesia preparing to face the challenges ahead?

The World Bank projects that by 2050 Indonesia’s economy will be the fourth largest in the world, and while their tourism economy is booming, lack of regulation and insufficient environmental protection means there is a high likelihood that their ecosystems will deteriorate rapidly. Furthermore, to accommodate demand as the world’s largest exporter of palm oil, more than a million hectares of Indonesian rainforest are cleared every year.

How are the young people of Indonesia preparing to face the challenges ahead? To tell their stories, the film focuses on three branches: cultural preservation, education and literacy, and the development of sustainable tourism. The choices made by Indonesian youth at this point in time will affect the global economy and ecological security in the near future–we should all be paying attention.

The film will employ the art of wayang kulit to weave together the segments of interviews. Wayang kulit is a dramatic form of shadow puppetry performed to a background of gamelan music. Indonesian wayang was designated a Masterpiece of the Oral and Intangible Heritage of Humanity by UNESCO in 2003, but such a designation does not mean a re-engagement by the community–indeed participation with the art form has dramatically decreased in the younger generations of Indonesia.

With the help of world-renowned dalang Ki Midiyanto, No Word for No will be a platform to bring the intricate art of wayang kulit to the attention of a large audience in the context of modern-day issues faced by Indonesian youth.

Make a donation to No Word For No. 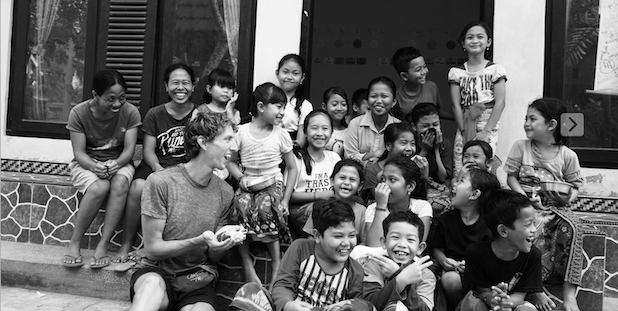 Andrew Morrison is a professional storyteller with a passion for community, a unique background in creative solutions to global issues and a mission to help improve the world through film. Andrew earned his Bachelors of Science in Environmental Science Policy and Management in Minnesota and completed his thesis on soil erosion and flood prediction methods in Brazil. Following graduation, he then immediately began work focused on Policy and Planning with the United Nations World Tourism Organization as a sustainable tourism destination specialist. Andrew transitioned into the film world with a three year period of work at a commercial film agency before he chose to pursue a career in documentary film production by forming his own production and distribution company in Los Angeles: Hydric.

Auden Bui is a DGA award winning director and cinematographer. Before graduating from USC’s School of Cinematic Arts, she received her B.A. from the University of California Berkeley where she won the Eisner Award for Photo-Imaging. At USC, she studied directing while discovering her love for cinematography. In addition to a DGA award, she also received awards from The Caucus Foundation, Irving Lerner Endowment Fund, and the Charles and Lucille King Foundation for her M.F.A. thesis, The Lost City of Tomorrow. She recently sailed around Antarctica, completing a life goal of visiting all 7 continents and holds a lordship title from the micronation of Sealand.

Colton Loftin is a writer, journalist, and editor from Grinnell, Iowa. Colton studied Journalism and Mass Communications at Iowa State University with an emphasis on digital media production. He produced a weekly news show through ISU’s Greenlee TV for two years, and has been involved in documentary film production in Los Angeles for three years.

Mr. Ki Midiyanto is a musician and puppet master (dalang) from Wonogiri, Central Java, who comes from a family of artists. For over thirty years he has taught and performed extensively in Java, the U.S., Singapore, New Zealand, Australia, and Canada, including ten years in Portland, Oregon, as the gamelan director at Lewis & Clark College. He has been featured in several documentary films and directed the gamelan on the CD Shadow Music of Java, recorded at the Smithsonian. He has taught and directed gamelan at UC Berkeley since 2004, following an earlier stint here from 1988 to 1992, and has led Gamelan Sari Raras on three tours to Indonesia.

Make a donation to No Word For No.