Out In The Streets


Film Independent’s Fiscal Sponsorship program opens the door to nonprofit funding for independent filmmakers and media artists. Donate today and help bring Out In The Streets to life.

Out In The Streets is a feature-length documentary that explores the world’s most influential and thought-provoking queer street artists to explore the untold history of graffiti and street art as a tool for Queer Liberation.

Going behind the scenes of this electrifying artistic movement, Out In The Streets reveals how Queer Street Art has evolved into a means of visibility and a call to action for communities marginalized by mainstream culture.

While the film showcases the deeply personal stories of LGBTQ+ artists and advocates from around the world, it also weaves together a half century of queer activism that has influenced much of their work. As Stonewall veteran Mark Segal explains, even on the night of the Stonewall Riots, queer teenagers were chalking “Tomorrow Night Stonewall” throughout Greenwich Village to help fuel the protests and encourage a citywide response.

For decades, there have been numerous queer activist collectives—such as Gran Fury, AKIMBO, and Fierce Pussy—that have very effectively used Street Art as a vehicle for their messaging. In the film, Avram Finkelstein and Maxine Wolfe (members of ACT UP) explain how they powerfully used public spaces during the AIDS crisis.

While our film was in production, a global Queer Street Art community was formed and the artists we interviewed begin collaborating with each other. Kashink and Hugo Gyrl paint a gate together in Brooklyn; Suriani and Homo Riot travel to NYC to collaborate on a mural honoring the 50th anniversary of the Stonewall Riots; and in Los Angeles the first Queer Street Art exhibition was organized, bringing together dozens of artists in a revolutionary celebration of community.

Out In The Streets goes beyond exploring Queer Street Art as a movement—it defines this pivotal moment of queer artists coming together as a way to inspire generations to come. 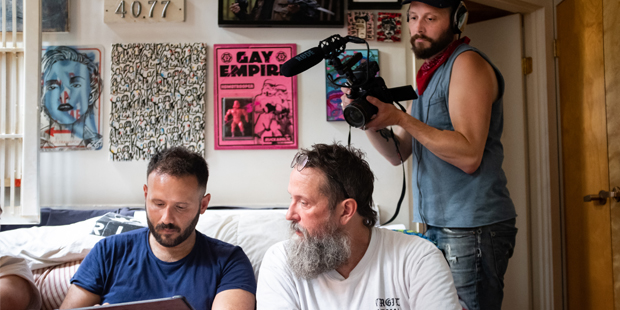 ​​Daniel Albanese – Director/Producer/Cinematographer
​​Daniel “Dusty” Albanese is the New York-based photographer and filmmaker behind the website TheDustyRebel. Shaped by his background in anthropology, he has built a worldwide following documenting the more marginal aspects of the urban landscape, as well as controversial artworks, and political protests. In 2017, he began production on his first feature length documentary and book Out In The Streets.

In 2013, he gave a series of lectures on street photography at Wheaton College as part of their Evelyn Danzig Haas Visiting Artists Program. He has also been a recurring guest speaker for the City College of New York, as well as at Stanford University, Metropolitan State University of Denver, Adelphi, and MoMA PS1. Daniel has been interviewed for several Street Art documentaries such as, Janz In the Moment and Stick To It.

Daniel’s photography has been exhibited in many shows in NYC, such as the International Center of Photography’s “Occupy!” and #ICPConcernedGlobal Images for Global Crisis. In 2019, his work was acquired by the Leslie-Lohman Museum.

Jonathon Roessler – Producer
Jonathon Roessler is a graduate of Vassar College and the MFA Film program at Columbia University. While at Columbia, Mr. Roessler obtained a dual degree in Producing and Writing as well as teaching in the undergraduate film department. After producing the Sundance award-winning short film The Dawn Chorus, Mr. Roessler went on to write, direct, and produce the high school satire First Period. This short was awarded the inaugural music grant from ASCAP that provided for a 20-piece live orchestra and went on to win numerous film festivals as well as the Directors Guild of America (DGA) Short Film Award. It has also racked up nearly 3 million views on YouTube. Since moving to Los Angeles, Mr. Roessler has written for episodic television including Grendel (Netflix), Teen Wolf (MTV), Cupid (ABC), The Beautiful Life (CW), My Life With the Walter Boys (Netflix), and Overnight (Sony International). His pilots include the sci-fi thriller Colony for Hulu as well as an adaptation of The New York Times best-selling novel Over You for One. His first original play River Phoenix is Dead recently world-premiered in Los Angeles. He is currently writing a neo-noir thriller for Paramount.

Make a donation to Out In The Streets.