Featuring an all-female crew with combined 30 years of professional experience, we invite you to be empowered, be inspired, and discover your reason to fight!

After celebrating her “Annual 25th Birthday” a thriving designer visits her disinterested doctor who discovers a life-threatening diagnosis. Inspired by the filmmaker’s true-life experience and highlighting the medical disparities women of color face.

Never more than a text message away, is Carly’s BFF, Megan, (30s, bubbly, bold, Cajun-Asian fusion chef), who is devoted, caring and protective of Harper. Together, they exude “Wonder Twin” power energy and never fail to have a good time and sprinkle that same joy all around wherever they go.

After being diagnosed with uterine cancer, Harper’s entire world is turned upside down. Between chemo, radiation treatments and a pending hysterectomy, she slowly loses sight of who she is.

When Harper’s health spirals downward, it is far too much and she retreats to the sanctity of her home, falling into a deep sleep. In her dreams, she has a paradigmatic moment when she is visited by her late mother who helps her confront her fears to face her future. This dream sequence represents a rebirth and baptism of a new life for Harper.

Through determination, tears and a host of love and support from her friends Harper reclaims her power!

Pieces of Eleanor is a drama highlighting real-life issues that women face when dealing with reproductive health issues.

Make a donation to Pieces of Eleanor. 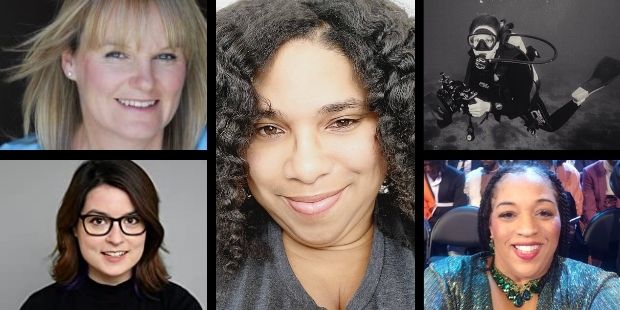 President Barack Obama describes her as “a woman of great strength and character” in a letter of commendation. V.C. Rhone’s life experiences permeate her filmmaking, and she often creates stories that shine a light on women, cultural awareness, and social justice.

As a New York University alum, she studied under professor and Academy Award-Winner, Carol Dysinger (Learning to Skateboard in a Warzone if You’re a Girl). She is a member of The Writers Mob LA and was a finalist in The Quarantine Monologues produced by Leah Daniels Butler (Coming 2 America, The United States vs. Billie Holiday). Her award-winning documentary, Pie a la Mode serves up a slice of history revealing the confederate origins of a small town and the Black pioneers who homesteaded there. Her comedic script, “Pastor Chris” was a finalist for the CEG Half-Hour Television Comedy Screenwriting Workshop, granting her an opportunity to train with Primetime Emmy Nominee, Jim O’Doherty (3rd Rock from the Sun, Kickin’ It, The Tracy Morgan Show).

Because of her passion for helping other creatives, she founded and directs the Huntington Beach Cultural Cinema Showcase, which has been featured in the Los Angeles Times and the OC Register, and highlights films from underrepresented groups.

Kate is an award-winning director-producer with experience in narrative features, short films, music videos and commercials. Her feature film Altered Perception, starring Jon Huertas (Castle, This is Us), is currently streaming on Amazon and was a DGA Newcomers Award nominee.

Several of her films screened at the Cannes Short Film Corner and a few were picked up for distribution. She was previously the shadowing director on Amazon’s Transparent where she was mentored by Jill Soloway.

Kate is the founder of New Hollywood Collective – an inclusion initiative that gives BIPOC members the tools to develop, finance, and produce short films.

Having worked at both The Walt Disney Company and Warner Bros. Studios, she is able to bring experience, knowledge, relationships and hands on know-how to the field of Casting and Producing. She has a keen sense for comedy as well, and was part of the team that launched BET’s classic Comic View for cable television. Pamela has cast over 100 films and assisted with the marketing campaign for the Matrix Trilogy and the Harry Potter franchise. Her most recent projects, The Fifth of July starring Jaleel White, and Reality Queen! with Denise Richards, are currently available on multiple streaming platforms.

Jenny Baumert is a cinematic visionary who specializes in underwater photography and cinematography. She recently worked with Grammy Award-winning pop-punk sensation, Avril Lavigne, and was a part of the creative team for Grammy, MTV, and Billboard Award-winner, Harry Styles’ ethereal, underwater music video, “Falling.” Recently, she was featured in the groundbreaking, premiere magazine for underwater photography and cinematography, Waterproof.

Edith earned Skidmore College’s elusive Periclean Award for her work in composition. Edith has been a featured composer and contributed to the music departments of various projects including: Saturday Night Live, 90 Day Fiance, Catfish: The TV Show, Married at First Sight, Project Runway, and The Circus: Inside the Greatest Political Show on Earth. Most recently she worked on Disney’s Marvel podcast, “Declassified” as a featured composer.

Make a donation to Pieces of Eleanor.