Meet Jim. A police cadet fresh out of the academy who gets in over his head when he tries resolving a domestic abuse case outside the legal system. Good luck, Jim.

We open on a crackling VHS title sequence where our Narrator introduces us to the movie: a police training video starring Jim, a police cadet who is anxious to begin his life on the force. Jim gets assigned a partner, the no-bullshit Allison, and the newly paired team get a domestic abuse call, heading out to investigate. They find Mark and Leah fighting, but when they both deny any violent acts occurred, Jim is struck by his inability to help the situation and Allison informs him that sometimes the law trumps morality.

Overcome by his duty to do “good”, and going against the advice of the narrator and his partner, Jim begins to stray from police protocol in order to help this family. He goes so far as to convince their daughter, Lauren, to go on tape about her father’s abuse, and persuades Leah to testify in court. When Leah refuses to testify at the last minute, Jim is completely disillusioned and the narrator reminds us that this is all too common in the life of a police officer.

That night, Jim gets a call from Mark, telling him he’s going to harm Lauren and Leah. Jim find and pursues Mark on the highway while the narrator argues with him over his life choices. Jim finally catches up to Mark, who pulls over under a deserted overpass and they have a brutal fistfight where both men succumb to fatal knife wounds. Nice try, Jim.

Make a donation to Survival Skills. 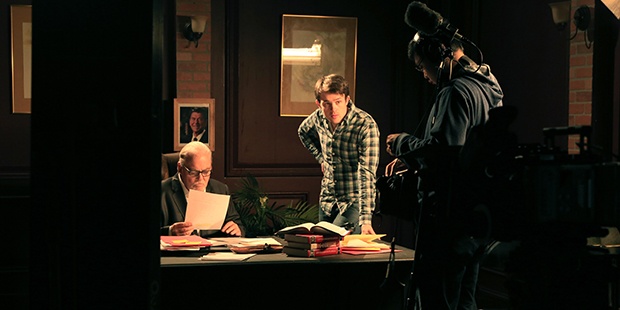 Quinn Armstrong is an award-winning writer, director, and actor formerly based in the Pacific Northwest. Beginning as an actor, he appeared on professional stages in a variety of roles and on screen in national commercials and broadcast TV shows, including NBC’s Grimm. Since taking up writing, his plays have been professionally produced on stages across Seattle and his work has been supported by numerous Pacific Northwest luminaries, including Brian Yorkey, Pulitzer Prize-winning dramatist. As a film director his early short films found traction by winning awards at the Local Sightings Film Festival and the 48 Hour Film Festival, among others. He is a Kreielsheimer scholar as well as the recipient of a McCune Foundation grant and attended USC’s School of Cinematic Arts under the mentorship of Jennifer Warren and Jeffrey Lengyel.

Colin West is an award-winning producer, director, and screenwriter based in Los Angeles. He worked professionally as a Multimedia Producer for MacArthur winning visual artist Ann Hamilton, and then as a Producer for CBS Broadcasting. He’s since been a freelancer in production for commercial and television shows across LA and worked in film & television development for Matt Reeve’s (Dir. Cloverfield, Dawn of the Planet of the Apes) company, 6th & Idaho, in association with 20th Century Fox. Since 2007, his narrative films, including two adaptations by Eisner Award-winning cartoonists, have been showing at festivals internationally and have garnered hundreds of thousands of views online. His films have been featured on io9, GeekTyrant, LaughingSquid, FilmShortage, and CNET. Colin is an Annenberg Graduate Fellow at the University of Southern California’s School of Cinematic Arts.

Allie Schultz is a graduate of the Savannah College of Art and Design in Georgia, where she received her BFA in film and television. She also studied in Lacoste, France, where she shot the documentary Les Artistes Des Lacoste, which went on to be an Official Selection at the Szolnok International Film Festival in Hungary. In 2014, she shot the award-winning short films The Peripheral, Take With Water, and Afterlife, the latter receiving first place in the Project Yellow Light PSA Competition. In addition, Allie also served as a camera intern on the critically acclaimed series, The Walking Dead. She earned her MFA in Cinematography at the AFI Conservatory.

Keara received her BFA in Motion and Graphic Design from Cornish College of the Arts in Seattle, WA. Since graduating she has worked as a freelance graphic designer, film editor, video producer and studio manager. She discovered a knack for editing while competing in the 48 Hour Film Project in 2012; many of her films winning awards including Runner Up for the City of Seattle, Audience Favorite, Best Use of Genre and Best Editing. She has an MFA in Editing from the AFI Conservatory.

Stacy Keach, winner of both a Golden Globe and Primetime Emmy for his work in film, has played to grand success in classic and contemporary theater’s greatest roles, and he is considered a pre-eminent American interpreter of Shakespeare. Perhaps best known around the world for his portrayal of hard-boiled detective Mike Hammer, Keach is also known for his portrayal of Ken Titus in the Fox sitcom Titus, Warden Henry Pope in the hit series Prison Break and Robert “Pops” Leary in the FX series Lights Out. Other notable portrayals occurred in The Traveling Executioner, That Championship Season, The Ninth Configuration, Escape From LA, and American History X.

Make a donation to Survival Skills.