It's much easier to shave your beard than to shed who you are.

Help independent filmmakers tell their stories.
Make a donation to The Chosen One today.

After impulsively shaving off his beard and sidelocks, a young Hasidic man experiences a nightmarish transformation that leads him right back to where he started. Over the course of one painful night, Efrayim Eisenstein will come to realize that it’s much easier to shave your beard than to shed who you are.

After impulsively shaving off his beard and sidelocks, Efrayim Eisenstein is violently thrown out of his family home. He finds refuge with his estranged, ex-religious aunt Stephanie, but flees her apartment in the middle of the night after she walks in on him in a particularly shameful moment.

Stumbling through the streets in a fragile state of mind, Efrayim experiences a nightmarish transformation that leads him right back to where he started.

Over the course of this one painful night, Efrayim will come to realize that it’s much easier to shave your beard than to shed who you are.

Make a donation to The Chosen One. 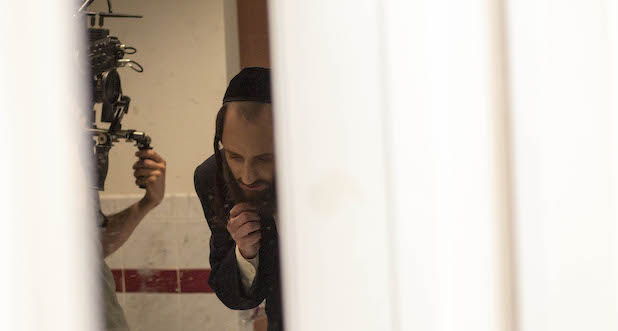 Elazar Fine grew up in the Ultra-Orthodox Jewish community. He spent his formative years in upstate New York, studying ancient Aramaic texts at yeshiva boarding schools. It was his love for film that inspired him to leave yeshiva and enter the secular world. He later attended Emerson College in Boston, from which he graduated in 2018 with a degree in Media Arts Production. His feature script, Bad Jews, won Emerson College’s award for Outstanding Writing for Film in 2018, and his pilot script The Chosen One was nominated for Outstanding Writing for TV that same year.

Kale Davidoff has worked in the film industry for more than a decade in a slew of production capacities. He has a variety of experience, from coordinating independent music videos to working in production offices of big budget features. He recently produced his first feature film, New Money, which was released by Gravitas Ventures in 2019. New Money premiered at the Black Nights Film Festival in 2017 and won the Audience Choice Award for Narrative Features at the 2018 Indie Memphis Film Festival. Kale lives in Los Angeles, but he loves Detroit.

Jacob Bridgman is the producer of The Chosen One. He grew up in western Massachusetts, and studied ilm production at Emerson, where he was one of the producers of 8 Billion Angels, a feature environmental documentary about consumption. Working both in fiction & nonfiction, He has produced over a dozen shorts in the past 5 years. He currently lives in Los Angeles and works at SMUGGLER, an internationally recognized commercial & music video company.

Originally hailing from Pennsylvania, Nicholas Bupp, is a cinematographer currently based in Los Angeles. Since graduating the American Film Institute in 2015, he has been working as a cinematographer on numerous projects spanning from short form commercials and music videos to long form narrative projects. Nicholas strives to bring a unique vision and style onto every project he takes on. Most importantly, his inspiration comes through crafting visuals that serve to push a story forward both in emotion and tone.

Luzer Twersky is an actor, writer, and occasional musician. He was raised as a Hasidic Jew in Brooklyn, NY and broke away from his community in 2007 to become a professional actor. He starred in the 2016 film Felix & Meira, for which he was nominated for a Canadian Jutra Award. The following year, Luzer was the subject of the Netflix documentary One of Us, which follows him as he pursues his acting career and deals with the ramifications of leaving the Hasidic community. It was shortlisted for an Academy Award nomination in 2018. Later that year, Luzer starred in “Derech,” an episode of the HBO Anthology series High Maintenance. He is also an accomplished stage actor, working regularly with the New Yiddish Rep in New York.

Malky Goldman is an actor and artist currently located in New York City. Originally from Jerusalem, she relocated to the United States to study and graduated from Hunter College with a Degree in Fine Art. Her most recent acting work includes The Vigil (Blumhouse), Unorthodox (Netflix), and High Maintenance (HBO). Malky is also an accomplished stage actor, having starred in the New Yiddish Rep’s acclaimed stage productions of Rhinoceros and God of Vengeance.

Make a donation to The Chosen One.