A social media agency gets a new client...

Help independent filmmakers tell their stories.
Make a donation to The Disruptors today.

A social media agency gets a new client; a corporation who wants to run for president.

The Disruptors decide to create a fake politician in order to sell United Engines’ Ice Cream.

That fake politician ends up being a huge success and before they realise what is happening their fake political candidate is running in the real presidential race, in the United States.

The film has been shot in the style of FYRE: The Greatest Party That Never Happened. We did character work with each of our talented actors and then interviewed them to create the bones of the story. Then we layered stock footage over the interviews and finally shot fake “archive” footage to illustrate key moments.

The Disruptors is a fake documentary.

The story is outrageous and balances the insane reality of working in a social media agency with the chaotic nature of the current political climate.

We have used a very inclusive creation process, where a group of people create a script as a team. We believe filmmaking is a collaborative medium and a great film is not singularly down to great performances from the actors, a rousing script from the writer, or an innovative vision from the director, but rather, from all of these elements working together to create a story.

Make a donation to The Disruptors. 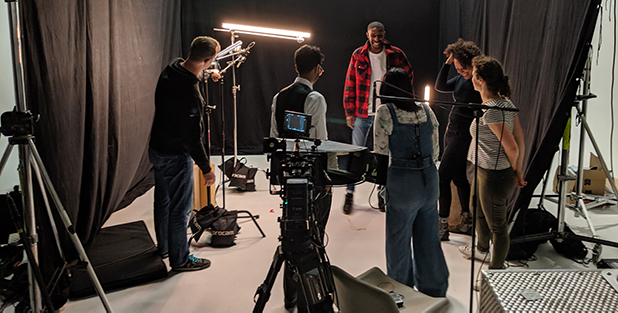 Léa Barisset is a multidisciplinary, having built a solid career in film armed with skills ranging from video editing and producing. She started her career in post-production on short stop-motion films like Tati Ramitsu and edited videos for Vogue, The British Fashion Council amongst many other fashion heavy hitters before going into production roles. Based in London, Léa worked on Anarchy! The McLaren Westwood Gang aka The Last Revolution (2015), National Anthem (2017) and she has a proven track record of working with Award-Winning Filmmakers, troubleshooting and creating outstanding work.

Emily studied Politics at Cambridge University, worked on development projects in Nigeria and England, ran away to New York, ran back to London and finally started writing. She spent two years as a journalist at OutThere, a gay men’s arts, fashion and travel publication, before leaving to pursue film. She is now a screenwriter and producer with Seek Films. She has had three short film scripts produced: All of Me (2017), which has played at 25 international film festivals to date, The Invaders Song (2018) which premiered at Palm Springs and Full English(2018) which won ‘Best Screenplay’ at the LiftOff Awards 2019. She recently wrapped on her directorial debut, short film Exit to Stage (2019) made with the support of Directors UK and ARRI. She’s a co-founder of ‘Breaking Through The Lens’ and an active member of WIFTV and BAFTA Crew.

Make a donation to The Disruptors.