The Hakawati Project: The Syrian Crisis

The Syrian War has impacted the lives of millions,but the media around the crisis rests largely in the hands of those who view it from the outside. As a result, the narratives are theirs. The Hakawati (storyteller, Arabic) Project is a 2 month comprehensive filmmaking lab aiming to foster the creative expression and sharpen the filmmaking tools of those impacted by the Syrian crisis, and offer alternative narratives to the ones mainstream media amplifies.

We hear the word “refugee” constantly and perhaps forget that we are talking about human beings who have lost loved ones, homes, dreams, dignity. Human beings who have been lost and confused amidst the stories their lives have become, and have much to say and express in creative ways. Human beings who stayed in their country and live today under ferocious economic sanctions, crumbling buildings and futures.Taking place in Armenia, The Hakawati Project is a 2 month comprehensive filmmaking lab in various disciplines of cinema that work in concert to produce 6 short films made under the mentorship of A-list international talent. In collaboration with The Sundance Institute, we aim to bring together those impacted by the Syrian crisis and support them in developing their filmmaking skills. By doing so we hope to help empower the expression of their narratives, often silenced in mainstream media. Through this process we hope to build a bridge between the communities fractured by this crisis and the global community at large. Our work will function by healing and educating both the talent involved and the receiving audience among the international community.

Make a donation to The Hakawati Project: The Syrian Crisis. 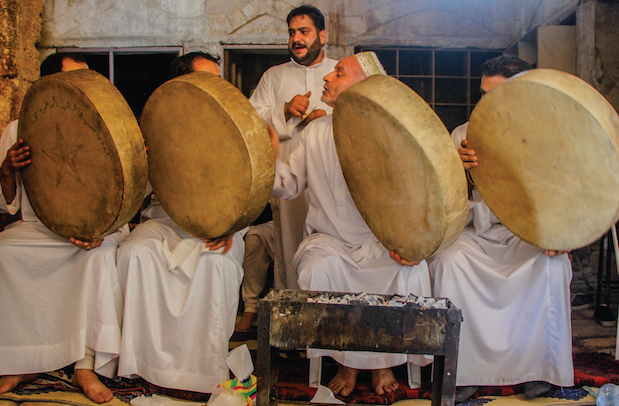 Sona Tatoyan is a first generation Syrian-Armenian-American actor/writer/producer with bases in LA, Berlin,Yerevan, and Aleppo. As an actress, stage credits include world premieres at Yale Repertory Theatre, The Goodman Theatre, The American Conservatory Theatre and others. She starred in The Journey, the first American independent film shot in Armenia (winner, Audience Award Milan Film Festival, 2002). Her first feature film script,The First Full Moon, was a 2011 Sundance/RAWI Screenwriters lab participant and 2012 Dubai Film Connection/Festival Project. Through her new social justice/social enterprise production company Disruptive Narrative, co-founded with International Human Rights Barrister Jennifer Robinson, Ms. Tatoyan is in development with Radical Media on Three Apples Fell From Heaven, a feminist, magical realistic television series about an Armenian family in Syria over the last century. Ms. Tatoyan served on the World Cinema Jury of the Duhok IFF in Iraqi Kurdistan (2016) and as Rudolf Arnheim Guest Artis Professor at the Humboldt University in Berlin, (2017). Speaking engagements include: “Storytelling as Spiritual Vehicle: A response to the Armenian Genocide and Syrian Refugee Crisis” at The Brandenburger Gate Foundation,Berlin; “Trauma, Magic, Love: Being in Aleppo with Karagöz Puppets, My Ancestors and the Spirit of Osman Kavala” at CMES Harvard University. Ms. Tatoyan is a second degree black belt in Tae Kwon Do and received her yoga teaching certification in Goa, India.

Jennifer Robinson is an Australian barrister at Doughty Street Chambers in London specializing in human rights, media, public, and international law. She has dedicated her career to human rights, building power in social movements and supporting marginalized communities. Jen has acted in cases for individuals, governments and non-governmental organizations before international, regional and British courts, including before the International Court of Justice. Her work often involves UN engagement on international law and human rights issues. Her cases include acting for Julian Assange and WikiLeaks, for the BBC World Service in respect of the persecution of BBC Persian, and for the Nobel Peace Prize nominated leader of the West Papuan independence movement, Benny Wenda. She also recently provided expert evidence on international law to the UN inquiry into the murder of journalist Jamal Khashoggi. In 2019, she was recognized as International Pro Bono Barrister of the Year in the United Kingdom. Jen spent five years developing a global human rights program with the Bertha Foundation that has invested millions in training the next generation of human rights lawyers, funding strategic human rights litigation and investing in documentary films raising awareness about human rights issues. Together with Sona Tatoyan, she co-founded Disruptive Narrative, a production company dedicated to telling social justice stories. She has postgraduate degrees from Oxford University where she was a Rhodes scholar and speaks fluent Indonesian and Malay.

Raffi Niziblian holds a degree from Concordia University (Montreal, Canada) in Communications Studies specializing in Film and TV Production. In 2002, following his 5-year tenure as Field Executive for Scouts Canada’s Quebec Provincial Council, Raffi directed his expertise towards Armenia as the Program Director for the Land and Culture Organization (LCO) where he implemented the promotion, outreach and expansion of this multinational organization. Raffi was hand picked to become the Commercial Manager for VivaCell Mobile Operator in 2005. His input was vital to the implementation of the company’s commercial operations. In 2006, Raffi founded and directed Deem Communications (DEEM), a full-service marketing communications agency. During this time, he has realized many national projects including branding and national campaigns. Since March 2017, Raffi leads the Branding Gyumri project which has evolved into a Smart City concept to be implemented with local authorities and international groups. Currently, as the Creative Director of DEEM, Raffi has gained harty insights of Armenia’s marketing and communication industry. A global thinker, Raffi communicates in five languages – English, French, Armenian, Arabic and Italian

Nare Mkrtchyan was born in Armenia and raised in Los Angeles. She combines both worlds: the American filmmaking technique and international, independent spirit. She holds a Bachelor of Arts in Film Production from the University of Southern California School of Cinematic Arts. She was a producer and director of over 60 short films and productions. Her documentary The Other Side of Home became the first Armenian Genocide film to ever make the shortlist of the Academy Awards. Being a grandchild of survivors of the Armenian Genocide she believes that cinema is an important medium which needs to be used wisely as it has the ability to heal people and make a positive impact on our world. Her passion is telling unique human stories that connect people and move beyond the boundaries of nationality, gender, and religion and to transform the darkness into light.

Make a donation to The Hakawati Project: The Syrian Crisis.