In a world obsessed with perfection, an eclectic woman realizes that life is better imperfect.

Anna is an eclectic woman in her 30s. One morning, she stumbles upon a show called Living the Perfect Life. The ideal pitched by the TV host is far away from Anna’s own existence and it makes her feel like an outsider. To escape her frustration, she dives into her imaginary world, until a call from her funny and intellectual friend Jean, distracts her from her thoughts. Jean challenges her to face the real world and observe things from a different perspective. The dialogue between them brings back Anna’s memories from the past and makes her relive all the feelings that have shaped her journey.

Make a donation to The Imperfect Picture. 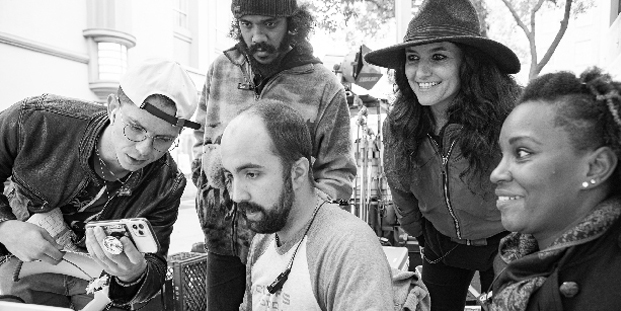 Coxy was born in Italy and raised between Milan and Paris. Films have been her greatest passion ever since she was a kid. Coxy started her career in fashion where she has worked as creative for international luxury brands, including Gucci, Dolce & Gabbana, Roberto Cavalli, Prada, Ralph Lauren among others. She has de-signed their collections as well as produced their ad campaigns, videos, and look books. Coxy has moved to Los Angeles in 2013 to follow her dream of becoming a filmmaker and ever since has created & directed Fashion Films, Short Films and Branded Content targeted for the new media. Her work has been featured on Vogue, Marie Claire, L’Officiel, among other international magazines as well as at the Triennale Museum of Design in Milan. Her films have been featured at Inter-national Film Festivals and won several Awards.

Tre’Shonda was born in Texas, but was raised in Okinawa, Japan. Living overseas shaped her worldview around her passion for music, tv/film and policy. She always knew she would work in a field to make a difference and impact change. Tre’Shonda graduated with degrees in Marketing and Spanish from Auburn University and attended law school for two years, but later decided to advocate in politics creating digital media campaigns with stories of those impacted by policies in their local communities. After a few years in Washington, D.C., she decided to leave politics to combine her love for film and advocacy by producing stories that have the power to transform people and evoke change.

Adam is a director, producer, cinematographer and camera operator from Baltimore, MD with a BFA in Film Production from Chapman University. In 2017 he started Omada Cinema LLC, and currently acts as co-founder and operator of the company. Since then he’s worked with clients such as C2O Coconut Water, Def Jam Recordings, Gucci, Mariu De Sica, ISKO, and GrandArmy as well as various other commercial companies, agencies, and musical artists.

Dan Punshon-Smith is a Producer, Editor, VFX artist, from Baltimore MD, and co-founder and operator of Omada Cinema LLC. Since moving to LA in 2017, he has thrown himself in the deep end of the production world, working on any project he could get his hands on. In the span of two short years he has worked with a wide variety of talented directors, agencies, and artists. Though his time in LA has been short and he’s still got a lot to learn. He’s found that there is a difference between doing something well and doing something perfectly. Simply put, he’s never learned from perfection, he learned from his mistakes. Learning to embrace these imperfections, these human errors, is what makes his work unique and what has propelled his career.

Make a donation to The Imperfect Picture.