There was no shortage of metaphors—running the gamut from funny to poetic—when Alfonso Cuarón kicked off Film Independent’s 2014 Directors Close-Up last night. Less than three weeks before the Oscars, where his latest, Gravity, is nominated for a whopping 10 awards, including Best Picture and Best Director, Cuarón sat down with writer/director John August to share insights into his ground-breaking work and reveal the truth about how those breathtakingly endless takes come into being. (They’re accidents.)

It is a testament to the closeness of his long-time collaborative relationship with cinematographer Emmanuel “Chivo” Lubezki that Cuarón uses “we” more often than “I” when discussing his work. (The two Mexico-born filmmakers have been friends since they were teenagers and went to the same film school, Universidad Nacional Autónoma de México.) And it’s a reflection of the extent of Chivo’s influence upon him that many of Cuarón’s answers begin “As Chivo says…”

Case in point: “When Chivo was working with [Terence] Malick, he called me and said, ‘You know how we always talk about that there are good locations and bad locations? We were wrong. Any location can be an amazing location. It’s about finding the essence of the location.'”

As with many directors whose work is deemed masterful, Cuarón makes it clear that he never stops striving to master new techniques and to continue evolving as an artist. “We [yes, he means he and Chivo] believe the only reason to make a film is what you learn for the next one.”

Both he and Chivo are candid about their dissatisfaction with their third collaboration. “I don’t think I’ve ever learned as much as I learned from Great Expectations. I learned what you should never do,” Cuarón said. “It’s as important to learn what to never do again as it is to learn what to do.”

During the color correction of Great Expectations, Cuarón said he and Lubezki made a long list of what you should never do. Cuarón blames himself for what he considers the film’s (over-stylized, overly-planned) deficiencies. “After Great Expectations, I needed to reconnect with what I love about cinema.” So he went to Kim’s Video in New York City (R.I.P. Kim’s) and got dozens of films he felt he had neglected that represented what he really loved about cinema. That exercise inspired the making of Y Tu Mamá También. “We wanted to get away from style and form and explore language. We tried to explore the possibilities of the cinematic language.”

Though he often uses the word “language” in discussing his work, Cuarón isn’t speaking about words. “I relate cinema more with music than with literature,” he said. It’s a more abstract art form in that it has a flow, he explains, and the narrative flow is an entryway into something bigger. “It’s like music,” he said. “You start with a theme and you build on that theme.” 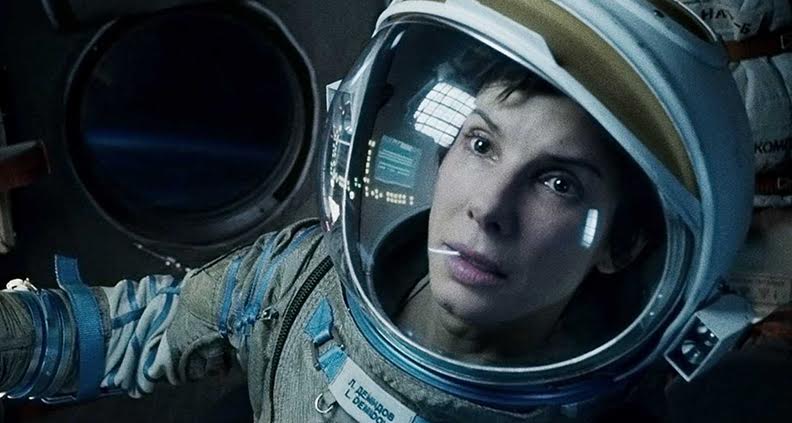 In Gravity, for instance, he says the narrative is built around the themes of adversity and rebirth. Cuarón explained the idea behind the transition of the camera from inside the helmet, where the audience is immersed in Sandra Bullock’s experience of spinning out of control and untethered, to outside the helmet, where the point of view is objective. “I wanted to bring the audience into her journey. The camera spinning with her changes from her perspective to your perspective. She’s your vessel for your own emotions.”

“The melody tends to be the narrative,” he said, extending the music metaphor. Sometimes you have music that’s more staccato,” he said, “or music that’s very sparse. “I don’t think there are any rules, as long as you explore that music.”

Exploration was another theme of the night, not only because Gravity’s tension stems from the pioneering impulse that compels us to rocket ourselves into the forbidding vacuum of outer space, but because Cuarón considers his signature style, the impossibly long shot, a matter of artistic exploration. “I’m not putting down cuts, but what Chivo keeps saying is ‘the idea is to explore all the possibilities of that moment before you cut.’”

It may be heartening for aspiring directors to hear that those shots—the very ones that ultimately are declared “virtuoso” in the context of an acclaimed film—are the ones that, on set, ride the edge between triumph and tragedy. The quintessential example, of course, is the horrifically spectacular four-minute take in Children of Men shot from inside a speeding car full of terror-stricken passengers when [spoiler alert!] Julianne Moore’s character is shot in the neck.

“Working with Chivo, it’s all about accidents,” explained Cuaron. “Chivo calls it, ‘following the fuck-ups or the miracles.’” Added Cuaron, “And those are interchangeable. You hear from Chivo all day long, ‘This is a disaster.’ For me this is like wallpaper.”