There’s only one more event left to enjoy at this year’s all-virtual, all-amazing 2020 Film Independent Forum: our 3:00pm PST Zoom happy hour—so here’s hoping you have a decent cocktail recipe in mind. And while we’re sad to close out the debut edition our yearly industry conference’s new weeklong run, we will of course point out that all #FiForum20 content will remain available on the Film Independent on demand portal through October 31. So there’s no excuse for missing a single second of career-oriented conversation and educational insight.

Keep reading for Day Seven and Eight Forum highlights, and follow along on Twitter, Facebook and Instagram for more coverage of this year’s Forum. To catch up with our complete archive of Forum coverage on the blog, click here. Thanks for joining us online this year—we hope you had a much fun as we did!

This morning, we were thrilled to welcome Spirit Award nominated Syrian documentarian Feras Fayyad to our virtual Fi Forum stage, as moderator Subina Shrestha explored the challenges of documenting harrowing situations as they unfold in real time. In focusing on his recent films Last Men in Aleppo and The Cave, we tried to unpack how fear, safety and ethical issues collide with the journalist’s duty to reveal the truth, raise awareness and build empathy. The goal wasn’t to settle on easy answers, but rather to help clarify what’s at stake. 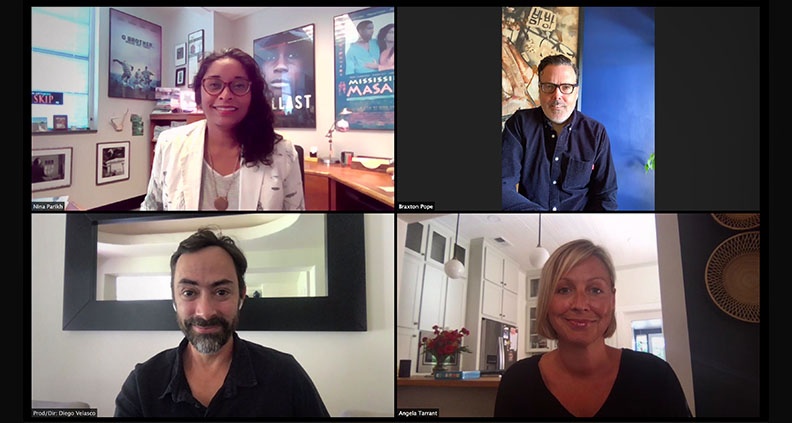 As certain states and countries are still figuring out production in the midst of a pandemic, there are some places where production is already underway. Lately, numerous films and TV shows have been shooting in Mississippi. In this panel, we heard directly from those in the trenches about how they’re currently running their sets while following safety guidelines and how these protocols are impacting production schedules and costs. Featuring Braxton Pop (producer, The Card Counter), Angela Tarrant (executive producer, HGTV’s Home Town) and Diego Velasco (co-executive producer, Netflix’s Social Distance.)

Look, it’s not like we’re tired of talking about feature films or anything—it’s pretty much our whole thing. That said, it was nice to close out #FiForum20 with a pair of case studies looking at narrative projects in a different medium. First was a look at the critically acclaimed sci-fi comedy narrative podcast Bubble, with creator Jordan Morris and his Maximum Fun podcast colleague (and Film Independent programmer) Drea Clark. Next, a look at the hit Netflix series Gentefied with series creators Linda Yvette Chavez and Marvin Lemus—both alums of Film Independent’s Project Involve artist development program.

Market Report: Six Keys To Getting Your Doc Out Into the World