One of the best things about being invited into the Film Independent family through our artist development programs is having the chance to learn from the cream of the crop. Some of the most successful directors, producers and screenwriters in the business come in to our offices to talk with the Fellows in our Labs about what it’s really like out there. They share the stories of their own ups, downs—and way, way  downs—in the business, as well as offering advice on everything from how to win over your crew on set to how to cure writers’ block. One of our favorite guest speakers is Corey Mandell, a writing teacher and award-winning playwright and screenwriter. Mandell has been a workshop leader and advisor for Project Involve and the Screenwriting Lab. We asked Mandell to contribute to this blog by sharing his articles on screenwriting, and thought it would be good to start where most great stories do: at the beginning. Here’s part 1: Breaking In.

I was fortunate enough to launch my career while still in film school. I had written a spec script that one of my instructors, Cathy Rabin, read and liked. Cathy ran development at Meg Ryan’s company and showed Meg the script (this was the mid-90s, when Meg Ryan was very much a big star). Cathy called to let me know Meg was interested in the script—and who was my agent? I told her I didn’t have one and the next thing I knew, big agents from ICM, CAA and William Morris were inviting me to lunch, telling me why I should sign with them. It was terribly exciting as I sat there, eating my chopped salads, secretly counting the millions I was obviously about to earn from the script sale.

But a funny thing happened on the way to the bank. My script didn’t sell because another movie with a somewhat similar idea came out and tanked at the box office, killing off any interest in my screenplay. This is a story I see all the time with my students. It is all too common to write a script that appears to be on a fast track to fame and fortune before some unforeseen event derails the project, usually mere moments before crossing the finish line. I once heard someone say this helps build character in writers. I don’t think this person is very popular or to be trusted.

The fact that it’s so hard to actually sell a spec script is the bad news.

The good news is that the life of a professional writer is less about selling scripts and more about getting paid to write. And if your spec script is original and amazingly well-written, it can open the door to such a career.

In my case, the script I wrote in film school got me a bunch of meetings around town. One of them was at Ridley Scott’s company, where I pitched an idea called Metropolis, which Ridley bought in the room. The next week, he flew me to London to work out the story beats with him. It was literally a dream come true. After I turned in the script, it was reported in Variety that Ridley was going to make Metropolis his next movie. Unfortunately it didn’t quite work out that way, but having Ridley Scott say nice things about your script on page one of Variety isn’t a bad way to be introduced to the industry, and I was able to spend the next ten years working nonstop as a for-hire studio writer.

But things are different now than when I was starting out. The industry is a game of musical chairs with far fewer chairs.

Writers, however, are still breaking into the business. It’s important to keep this in mind. Because the moment we start to listen to the doom-and-gloom voices in our heads that are shouting—or insidiously whispering—that it’s just too impossibly hard to break in, we have lost the game. We will stop writing. I regularly get calls from students and former students who have just received their first-ever paid writing gig. It’s not easy to break in, not by a long shot, but it is being done. The question is: how?

There are certain essential skill sets required to write at a professional level. Too many writers continue to crank out scripts without learning and developing these skills. This is not generally a road to success. So what are these skill sets?

The first skill set is the ability to write in compelling cinematic conflict, the kind that truly engages a reader and makes them want to keep reading. As David Mamet stated in his memo to The Unit writers, “This is a new skill. No one does it naturally. You can train yourself to do it.” And it is imperative that writers train themselves to do this, because not being able to write in compelling cinematic conflict is like wanting to be a professional basketball player without knowing how to dribble.

The second skill set is creative integration. Psychologists note some people create conceptually while others create intuitively. Conceptualists tend to write outside–in, starting with concept or situation. Intuitives tend to write inside–out, starting with character or theme. The result is that conceptualists tend to craft well-structured scripts populated by less-than-compelling characters, while intuitives tend to write strong characters and dialogue, but their scripts lack structure. Successful writers are able to write both conceptually and intuitively. They get the best of both worlds. While few people naturally do this, it’s an ability that can be developed through exercises designed to strengthen and integrate these two creative approaches.

The third skill set is writing process. I’ve heard many successful writers say they know people far more talented then themselves who do not have careers and never will have careers because of their process. Process is how we write, how we create our work. Too many people unknowingly use a way of writing that prevents them from creating their strongest material. Trying out different processes to find the one that allows you to create your most compelling characters and stories is the best investment a writer can make.

The fourth skill set is structure. Whenever I bring in an agent, manager or producer to speak to one of my classes, they always say they can immediately spot a script written to one of the this-must-happen-by-this-page, paint-by-the-numbers structure formulas, and these scripts never succeed. In order to have the best possible chance at success, writers need to train themselves to be able to create flexible, non-formulaic structure that supports and enhances, instead of destroys, what is unique and original about their stories, characters and writing.

The last skill set is effective rewriting. Too many writers spend enormous amounts of time and energy chasing their tails by rewriting their material without really improving it.

So how does one go about learning these skills?

One way is to take a class, but make sure it’s one specifically designed to teach these essential skills. Another option is to get a mentor. Some experienced writer, producer or manager willing to take you under her or his wing. I had a mentor when I was in film school and probably would never have had a career if not for him. Just about every successful writer I know has benefited from having such a person early in his or her development.

The way to give yourself the best possible shot at a career is to do the hard work to develop and master the essential skill sets, then repeatedly put them to use in service of being a real writer. Which means write what you most want to write, following your own unique passion and voice. 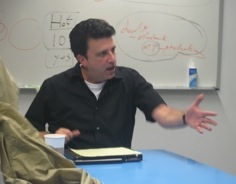 Not Horsing Around: Andrew Haigh and an Early Look at ‘Lean...