When the 1,400 people packed into the Theater at Ace Hotel in downtown Los Angeles last night cheered wildly for David Fincher following the closing credits of Gone Girl, the moment was a marked contrast to his experience just a few weeks before, when the film’s world premiere opened the New York Film Festival. It’s not that the NYC audience didn’t appreciate the film—the critics raved—but rather that Fincher himself couldn’t stomach sitting through it with an audience. “Nothing can convince you your movie is way too fucking long like opening it at the New York Film Festival.” Watching it “with a bunch of callow sophisticates” Fincher says he obsessed over moments he could have cut and the amount of dialogue, thinking things like, “You don’t have to see him driving up to his house, Who cares if he drives up to his house?” and “God, they just yak on and on…can’t somebody shut these fucking people up?”

“I was there for about an hour,“ Fincher said, “and then I had to leave because I was going to throw up.”

“So you can’t watch your movies with audiences?” asked Film Independent Curator Elvis Mitchell. “No,” Fincher said, “It’s like having a caesarian in front of 700 people. It’s horrible. It’s horrible. You can always make something better. They say, and it’s true, movies aren’t finished, they’re abandoned. And you have to make your peace with that.”

It was fitting that much of the conversation delved into the sometimes extreme emotional vacillations of filmmaking, as the film itself exuberantly leaps the emotional spectrum from frightening to funny, from dark to light.

An adaptation of Gillian Flynn’s best-selling novel, the story revolves around the mysterious disappearance of Nick Dunne’s wife Amy (the couple played by Ben Affleck and Rosamund Pike). Fincher said one of the things that attracted him to Gone Girl was the challenge of pulling off tonal shifts of the book. “The thing that Gillian Flynn did that never occurred to me is that you can have a movie that was a mystery that can hand the baton off to this absurdist thriller, and that could hand off the baton and become satire. And I thought, ‘I’ve never seen that done without a net.’”

Gone Girl hinges on the twisted nature of Nick and Amy’s relationship—“This is a marriage. It’s funny and horrifying,” Mitchell said. “It’s funny because it’s horrifying,” Fincher said. “I was most interested in the idea of narcissism as a way to hold two people together, and the notion that we project the best version of ourselves not only to seduce somebody we imagine would be perfect for us but also perfect for our narcissistic projection, and that three years down the line, the other person in the contract says ‘I can’t get it up for this anymore. I can’t be your soul mate. I was never that person and I’m done,’ and I love the wrath that inspired.”

Mitchell asked about the contrast between the idyllic appearance of Nick and Amy’s safe, secure home life and the dismal reality. Fincher said, “I don’t think any place is safe once you bring human nature into it.”

When he first brought Affleck in, Fincher told him, “The character you play in this movie gets his feet run over by a steamroller. And then he gets his ankles run over, and then he gets his shins, his knees, both femurs, his pelvis and then his lower back. That’s basically what it is. You just get crushed. But here’s why it’s funny.” It helped, Fincher said, that Affleck in his own life has been “tossed by the 35-foot waves of public perception. And he also has great wit about it. He knows that it has nothing to do with you. At a certain point, it’s not about you any more.” 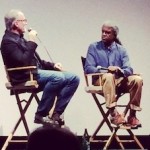 Explaining the appeal of “engineering dread” (as Mitchell put it), which has come to be a Fincher signature, Fincher said he likes movies with moments that cause such discomfort that it makes the audience physically squirm and sink into their seats. “To me that’s as valid as cheering at the end for the explosion of the Death Star. Where you put the audience in a place where they like this person. They don’t want to see this be that excruciating,” he said. When Mitchell asked the first time that struck him, Fincher told the story of seeing the premiere of King of Comedy in Westwood, shortly after moving to Los Angeles in 1984. (A perk of having signed with CAA was free movie tickets.) I remember sitting in the back of the theater, seeing the back of 700 heads. There’s that scene where Robert DeNiro takes his girlfriend to Jerry Lewis’s house for the weekend. And you’re sitting there watching this, hoping it’s a dream, thinking ‘this can’t actually be happening,’ and I watched 700 heads disappear [sinking into their seats] and I remember thinking ‘This is fantastic.’”

Another landmark on Fincher’s path to wanting to become a filmmaker: seeing Rear Window at age nine. “It gets to the point where Raymond Burr is taking his suitcase out of his apartment in the middle of the night and I turned to my dad and I was like, [he whispers] ‘He killed her.‘ He cut her up and put her in the suitcase!’ I remember thinking, ‘That’s insane, why I am I thinking this…’ being led to this conclusion, thinking the same horrible thought everyone in the theater is thinking. I love those moments where you kind of go, ‘Oh no.’”

Citing Psycho, Mitchell referred to “that creeping realization it’s not going to turn out well.” Said Fincher: “There are plenty of movies that turn out okay. Justice is served. Can I make one a year [where it’s not]?”

Fincher confessed that “all shooting days are hard, because whatever you’re left with is what you’ve gotta make the movie out of. I love actors and I love blocking and I love photography and I love getting the band together and trying to do something. But the actual,…it’s  6:30, there’s that scene, and it’s going to live forever with that material. I hate that. It makes me physically ill.”

Mitchell asked what Fincher remembers about his first day on a movie set. The answer was the story of his first day on his first music video. Fincher was 21 years old. He walked on set, where he said, “there were 90 people all staring, slack-jawed, like ‘what are you gonna do?’” One of the crew was a guy about 45 years old who the director knew. Fincher said he walked him and everyone through his plan: “Ok, here’s what we’re gonna do, chalk mark here, camera here,…’  and I do my whole thing and I walked everybody through it, at the end I take a breath, and the guy looked at me and said, ‘Really?’

“I spent the first 20 years of my career trying to get beyond that, so you get to a point where you go, ‘Yeah. Fucking really.’”

David Mamet and Ricky Jay Share Their Love of the Useless