If you’ve been a film fan anywhere on Planet Earth over the past 15 years, chances are you’ve found yourself tumbling down innumerable YouTube rabbit holes chasing content and commentary about your favorite pop culture obsessions. The platform—and the explosion of user-generated online video in general—has established an entirely new world of critical video essays, parodies, creative re-edits, remixes and unconventional insight about movies as cinematically obscure as Wrekmeister Harmonies and as culturally omnipresent as Star Wars.

One of the YouTube’s earliest continuing purveyors of smart, comedy-oriented original content centered (largely) around the re-purposing of preexisting film material, Auralnauts—the duo of Craven Moorhaus and Zak Koonce—has been regularly producing a series of inventive videos that pull off the hat trick of being formalistically exacting, insightful and entertaining.

From wryly overdubbing footage from Star Wars and The Dark Knight Rises to parodying the YouTube algorithm’s penchant for cheap clickbait, to original songs, commercial parodies and more, Auralnauts have built a loyal audience by chasing their authentic interests and devoting themselves to the craft of video.

We recently spoke to Moorhaus and Koonce about what unites their many varied projects, making the most of your skillset, the ups and downs of YouTube as a platform, and more (including—yes—more Star Wars.) Here’s the conversation: 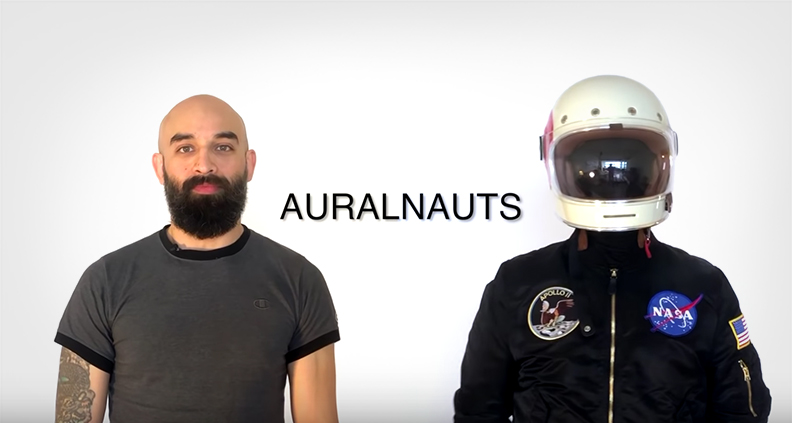 To start, could you describe what Auralnauts is, exactly? You have a YouTube channel and a podcast—what unites all of these projects?

Moorhaus: We try to play with expectations about what’s happening in pop culture. Everything we do—whether it be editorially or visually or original music or overdubs—it’s all aimed at humor, though often we’re trying to share some sort of perspective on whatever the subject is. An example would be our Star Wars series. We’re not simply overdubbing Star Wars. We’re trying to create a new story within the confines of the visual, re-editing it and overlaying an entirely new soundtrack from the ground up. We’ll poke fun at the original source, but in other ways it’ll revere the original. We try not to be too mean about our parodies.

To what extent do you consider what you do a form of film criticism versus just using pop culture as a jumping-off point to make something entertaining for the internet?

Koonce: It’s really project-to-project. When Craven is describes the reimagined narrative of the Star Wars project, we were sort of going into it just for fun to see what we could do, how we could play around with each scene. And within that, we found criticisms that we could make jokes out of. Sometimes it’s purely sort of a fun critical observation, like the “Minus Williams” video, where we just removed the John Williams score from the medal ceremony at the end of A New Hope, just to point out how weird that scene is from a filmmaking perspective.

Moorhaus: That’s less criticism and more just pulling back the curtain to show how film works. Everybody who’s on a film set, you’re just shooting a scene thinking, “How is this going to come together?” Before things are edited and before they’re sound designed, it’s actually kind of funny when you see scenes broken down to their most bare form, how much Hollywood magic goes into creating a film. One of my favorite examples is the Terminator: Genisys trailer we overdubbed. We were being critical not of the filmmakers or the actors, but of the concept itself and how convoluted time travel has become in the series.

Koonce: John Connor from Terminator 2 on, explaining everything that’s happened in Terminator…

Moorhaus: He’s explaining, “Listen to me, people: tomorrow we fight, and yesterday I sent a terminator back, but they also sent one back, but I defeated it, so I sent another one back…” so he’s just explaining how ridiculous the story is. What we hope from that is that people will get a laugh, but still not lose their interest in seeing the film. It’s a critique, but not a malicious critique.

Koonce: I think the overarching goal is just to entertain people. A lot of YouTube is just sort of rants, which seems to exist just to get a click, to appeal to some sort of confirmation bias within pop culture. Ours is kind of, “Here, come watch this thing and be entertained by it. Here’s this weird perspective we’re presenting to just sort of keep in mind as you watch this movie.

It’s in your name, but a lot of your work centers around ideas of audio and manipulating or exploring the way that audio works in entertainment. Where does this interest in audio come from?

Moorhaus: I’ve been studying music and music composition since I was a little kid. And after school basically just entered into a whole career of sound design, mixing and creating original music. That’s what’s informed so much of what I do. For Zak, he’s coming from a production background and a writing background, and when we started fusing the two things together, we just found a very funny language that was great for both of us as collaborators. And that goes back to our first entry, the Bane one. That was the one that really put us on the map. Our skillsets just gelled in ways that made us both laugh.

Koonce: Both of those [Bane videos], I don’t know if you noticed, but neither one of them included visual work. It’s all writing, sound and music. We like shooting things, but neither one of us is 100% comfortable doing it. So I think in a lot of ways, the overdub style is just a way for us to engage with what we’re really good at without maybe having to deliver material we’re not too happy with. Because Craven is professionally audio-oriented we’re set up with that, and for writing I don’t need anything except for my stupid brain [laughs]. So really, we work with what we have available to us. We would shoot a ton of videos if that was part of our access, but we’re building up to that.

You spoke a bit about your Star Wars Saga project, and you have other Star Wars based videos as well. What is it about Star Wars that lends itself so well to being repurposed for original online content?

Moorhaus: Zak and I will sit down and ask each other, “What is Star Wars?” [laughs] We actually ask that question, and we can’t quite put our finger on what that is, this 40-year-old franchise, that’s been so polarizing for the fan base. Like, we’re about to do this whole song basically listing things that have been designed on Star Wars, like Star Wars toothpaste or Star Wars Cheez-Its…

Moorhaus: Yeah, like bags of lettuce with a Star Wars character on it. It’s like, what’s going on? I don’t even think I’m a huge Star Wars fan. But I’m obsessed with it as a franchise because it’s such a juggernaut, and I also love the new films. But the whole thing is just so weird to us, how strong of a thing it is.

Koonce: A lot of our other projects are just a result of spending so much time with that footage. I can count at least five other projects that are sort of outside our abridged series that are just a direct result of working on that series. You just spend so much time with that footage you notice things, there’s so much subtle stuff and ancillary material that came out of it, just by virtue of working so diligently with all of this Star Wars video.

In many ways, as Auralnauts you’re sort of non-traditional content creators. What advice would you have for someone looking to be a digital content creator, whether on YouTube or some other platform?

Koonce: You have to strike a balance between making something that’s relevant, but something you’re actually interested in making. These homogenized videos, there’s gonna be a bubble that’s going to burst. Everyone wants to be a personality or an influencer. I think people are just going to go back to wanting things that are entertaining to watch for their perspective and the craft. I also don’t crap on any of the people on YouTube who are successful, because it’s still something they’re doing that they’re good at that other people aren’t.

Moorhaus: I’d say don’t be afraid to drive it home with your particular skillset that you feel most confident about. I think sometimes people try and do too much, and the digital medium allows for so many people with different skillsets. So it’s remaining ultra-focused in what you feel is your skill, because it’s easy to become overwhelmed by what you’re seeing independent artists doing today. A lot of people are just rocking it so hard, and it’s just like, “Oh, I have to do a video with that level of polish.” And I don’t think that’s necessarily true.

The Doc Life: So What Exactly Does Successful Distribution Look...