In 1994, a new kind of comedy changed our idea of lowbrow humor. Peter and Bobby Farrelly’s Dumb and Dumber essentially began with the simple idea of making a movie about two dumb guys and the obstacles they face. Nothing terribly groundbreaking. However, it was done in such a charming (and dare I say, clever) way, audiences were hooked.

The film is essentially a road movie, but replace the road movie’s usual angst-filled-leads-on-a-journey-to-find-themselves with two outrageous morons on a mission to find a pretty woman (to return a briefcase full of ransom money intended for her husband’s kidnappers)—and the typical rundown road-movie convertible with a giant, furry van made up to look like a dog. 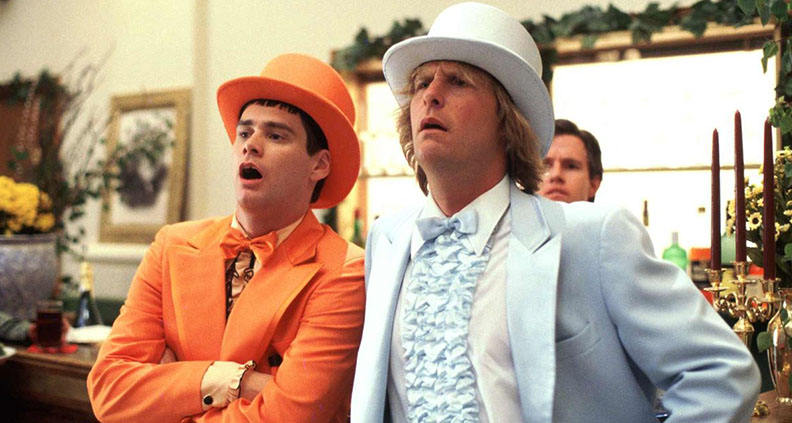 When Dumb and Dumber was released, ‘90s-comedy icon Jim Carrey was smack in the middle of blasting into superstardom. The In Living Color alum had just released Ace Ventura: Pet Detective, which had catapulted him from a relative unknown to a household name. He’d gotten wind of Dumber while on the set for The Mask, which was also released later in 1994 and became another big success. Carrey broke records, becoming the first actor in Hollywood history to have three #1 movies at the box office in the same calendar year. Furthermore, the actor was inhabiting roles that truly only seemed doable by him, and the Jim Carrey brand was in high demand.

Acting across from Carrey was Jeff Daniels, who at the time mostly had success with “critical darlings” such as Terms of Endearment, and who was primarily known for more serious work. However, Daniel’s bizarre transition to such an in-your-face comedy turned out to be brilliant move, helping propel the actor to a diverse, long-lasting career that continues to this day.

Dumb and Dumber was a massive success, making almost $250 million worldwide. A year later, an animated series aired on ABC based on the film’s characters, and in 2003 a prequel was released with an entirely different cast and crew. The original film is still so famous that its sequel, Dumb and Dumber To was released in 2014, a full 20 years later, with Carrey and Daniels returning, respectively, as Lloyd Christmas and Harry Dunne.

The style of Dumber itself is so loud and slapstick, it doesn’t seem to at all adhere to the indie stereotype of being subtle and poetic. There are of course well-known indie comedies, but one tends to imagine them with someone like Michael Cera mumbling their way throughout quirky, dry dialogue. Not Jim Carrey making “the most annoying sound in the world” or Jeff Daniels trying to cover up an inopportune bowel malfunction. 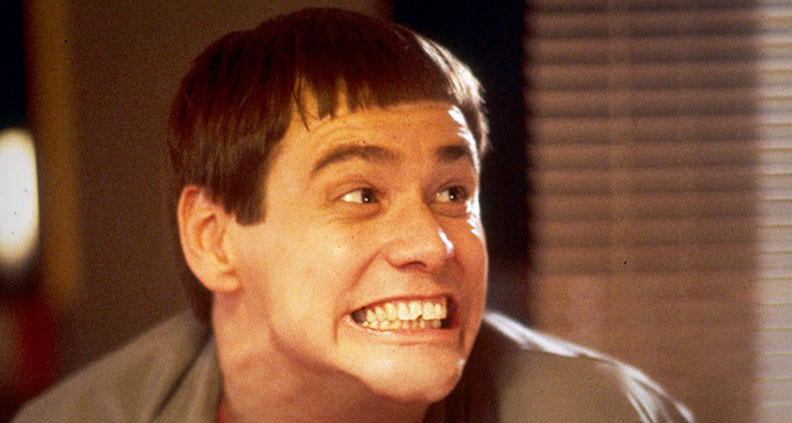 After a bit of flip-flopping and exchanging hands over the course of a few years, Dumb and Dumber was produced by the independent production company New Line Cinema. Not only was 1994 a big year for Jim Carrey, it was a big year for New Line, still one of the largest independent production companies in America—and who, in 1994, was about to become much, much larger. The same year Dumb and Dumber came out, Turner Broadcasting Systems bought New Line. At the time New Line was just starting to put out some films with more conventional marketing (The Mask being a prime example, with tie-ins with McDonald’s and toy-makers). However, the company was still putting out smaller, more typically independent films, and promoting them in creative ways.

Peter and Bobby Farrelly had been writing for nine years without getting any films actually made. They’d never directed before, and only did so because a studio exec had enjoyed their passionate pitch so much, he agreed to install them at the helm. They went into production essentially winging it, literally knowing next to nothing about directing—something that would never happen at a major studio, then or now. The brothers were such novices they were convinced for the first few weeks of production that someone else would be brought on to replace them. The duo is now considered one of the most successful comedy filmmaking teams of all time.

Sure, the film had a famous cast. But after a little more digging, one finds out that, as new (and independent) filmmakers tend to do, the Farrelly brothers took a fair amount of risks and made some fairly bizarre choices.

When Jim Carrey was first presented with the film, he was still considered a bit of an unknown. He was on set for The Mask and hadn’t yet released any of his major 1994 hits. After he’d already agreed to make the film, his career began to blossom, and was actually in a position to be able to renegotiate his Dumber acting fee.

Additionally, the studio flat-out did not want to hire Jeff Daniels—they didn’t have faith that the traditionally serious actor could pull off comedy. The Farrellys wanted him so badly, though, that the studio reluctantly agreed, intentionally lowballing him his acting fee, thinking he’d say no. He didn’t. And it’s probably safe to say that neither New Line nor Daniels regrets the decision casting him in the role.

Dumb and Dumber is truly a movie where, looking back, nothing about the film was as it seemed at the time of its release. Frequently, enduring indies have this effect. We think of them and their success fondly, of their talented actors and quotable one-liners, but we fail to remember the difficult circumstances and counterintuitive (at the time) decisions that went into their actual making. With Dumber you had a writing duo without any prior film success, an up-and-coming actor with only minimal name recognition, and another actor who seemed totally wrong for the role. Pair that with a small, but growing studio willing to take a chance on an unconventional style of humor and you had one of the most famous comedies of all time.

Ultimately, the Farrellys went from having panic attacks because they didn’t even know what “coverage” meant to getting phone calls that their film had just gone to #1. Indie filmmaking allows artists to take these risks and follow their guts, and in some cases, it really, really pays off.