Exposing a painful, quintessentially American geography, Conscience Point unearths a deep clash of values between the Native American Shinnecock and their elite Hamptons neighbors, who have made sacred land their playground.

The Hamptons: playground of the super rich. Epicenter of a luxury property boom, with developers scheming for any scrap of land on which to make millions. Meanwhile, the original inhabitants of this beautiful peninsula, the Shinnecock Indians, find themselves pushed to a point of near extinction, squeezed onto a tiny 750-acre reservation. Over hundreds of years the Shinnecock have seen their ancient burial grounds plowed up unceremoniously for the widening of roads, golf courses and new mansions. On the reservation, wounds run deep. A long-simmering tension between the wealthiest Americans and the Shinnecock will come to a head in the summer of 2018 when the world will be watching the U.S. Open golf tournament unfolding at the ultra-exclusive Shinnecock Hills Golf Club. Few will have any idea that the course was literally carved out of a Shinnecock burial site. A resonant, universal story about place, belonging and power, Conscience Point will expose the true story that underlies the Hamptons as longtime Shinnecock activist Becky Hill-Genia takes a courageous stand to secure the Shinnecock’s future against the odds.

Make a donation to Conscience Point. 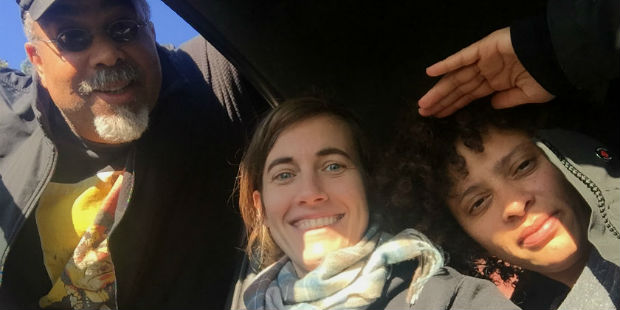 Julianna Brannum is a documentary filmmaker based in Austin, TX. Her first film, The Creek Runs Red, was selected to air on PBS’s national prime-time series, Independent Lens. She later co-produced a feature-length documentary with Emmy Award-winning producer Stanley Nelson for PBS’s We Shall Remain, a five-part series on Native American history. The episode, “Wounded Knee”, chronicled the siege of Wounded Knee, SD in 1973 led by the American Indian Movement and had its premiere at the Sundance Film Festival and later won the ABC News VideoSource Award for Outstanding Use of Archival in a Film. Ms. Brannum was selected as a Sundance Institute/Ford Foundation Fellow and has been awarded grants from the Sundance Institute’s Native Initiative, National Geographic, Women in Film, ITVS, the Oklahoma Humanities Council, Vision Maker Media, and the Sundance Documentary Fund for her public television documentary LaDonna Harris: Indian 101. She was also awarded a fellowship from the Rockefeller Foundation and the Tribeca Film Institute in support of the film. The film aired nationally on PBS in November 2015 and was Executive Produced by Johnny Depp. Ms. Brannum most recently served as Series Producer on the PBS series, Native America, produced by Providence Pictures. This epic, 4-part series focuses on the civilizations of the Americas. Native America will air nationally on PBS in Fall 2018. Ms. Brannum has also produced programs for Discovery Channel, HGTV, DIY, A&E, and Bravo and is a graduate of the University of Oklahoma where she was awarded the 2008 Distinguished Alumni Award for the College of Arts and Sciences and is a member of the Quahada band of the Comanche Nation of Oklahoma.

Charles Certain is a Shinnecock Montauk Native residing on the Shinnecock Reservation in South Hampton, New York. Owner of Certain Media, Inc. For the last 11 years he has worked as a videographer and editor for the town of Southampton. His footage appears regularly on the local government cable station. He also documents all the important events on the reservation, including the famous annual Shinnecock Pow Wow. When he isn’t documenting the world around him he is playing music and running his audio and video studio. He is excited to be a Co-Producer on Conscience Point, helping to tell the story of the rich long island indigenous history and the personal stories of the people who make up South Hampton and the Shinnecock Nation.

Brian Johnson is an Emmy and ACE nominated film editor who works in both fiction and non- fiction film and television. Since attending film school at New York University, Brian has been an editor on projects such as He Named Me Malala for which he received Emmy and American Cinema Editors nominations, the Sundance Award winning After Innocence, Michael Apted’s Married in America series, the acclaimed On Freddie Roach for HBO, Rob Epstein and Jeffrey Freidman’s And the Oscar Goes To, Anita Hill by Freida Mock, and the Academy Award nominated Buena Vista Social Club for which he was nominated for an American Cinema Editors award.

Make a donation to Conscience Point.