Every 8 minutes a child goes missing in India.

Help independent filmmakers tell their stories.
Make a donation to From The Shadows today.

A shadow trail leads into a black hole, where a child disappears every 8 minutes. From The Shadows is a rocky journey through the Indian subcontinent’s most trafficked route, unveiling a sisterhood of survivors and stories of resilience.

An artist relentlessly sprays silhouettes on public walls tagged #missing, an activist accompanies rescued girls across international borders. Parallel narratives intersect to reveal a sliver of hope when women imaginatively challenge a powerful trafficking nexus operating in a country where every 8 minutes a child goes missing.

Make a donation to From The Shadows. 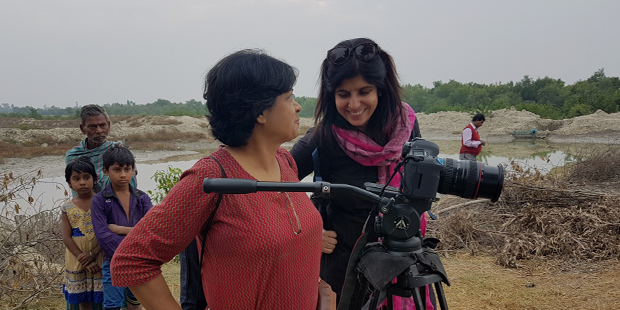 With a background in filmmaking and journalism she captures intimate accounts of real people whose stories we do not notice, a rat killer in Mumbai (The Rat Race), children choosing music over violence in an area known for gang warfare (Lyari Notes) or unsung heroes of Indian cinema (Stuntmen of Bollywood). Now she turns the spotlight on survivors of child sexual violence as they emerge From the shadows. Chosen for 7 international forums in Portugal, Korea, India, Israel, USA, France and Geneva. Miriam is one of 18 fellows selected for the Global Media Makers Fellowship (2019-2020) by Film Independent (USA) and the US State Department for a 6 week residency in Los Angeles followed by a year round mentorship program. Nominated in 2020 for the Chicken&Egg Award as well as the IDA-Netflix Emerging Filmmaker Award. Her films premiered at IDFA Amsterdam, nominated for Alliance of Women Film Journalists – EDA award, won the Mipdoc Coproduction challenge at Cannes, nominated for youth jury award at Sheffield (UK). Broadcast internationally on channels like Arte, National Geographic Channel, Al Jazeera, BBC world and Netflix. In India her films had theatrical releases and won top awards at Kerala Film Festival and Indian Documentary Producers Association.

Is an acclaimed cinematographer in the documentary space with over 15 years of experience. Her latest work includes a multi disciplinary project Dare to Dream focused on early marriage of girls & the discontinuation of education in Rajasthan. She has worked as a Joint Director with Nobel Laureate Prof Abhijit Vinayak Bajerjee on The Magnificent Journey. Some of her other titles are Times and Tales of Democracy and Like Whirlwinds, supported by TED and Sundance Institute.

Aalia has worked as a producer/director in non-fiction and factual programming for more than a decade. The previous documentaries she has worked on are – Last King of Burma, Robot Jockey and Stuntmen of Bollywood, which are all issue, based films.

Is a screenwriter and filmmaker. Her first film as Associate Producer Frozen, premiered at Toronto International Film Festival and has been awarded worldwide and conferred with 2 National Awards in India. She is a 2019 Film Independent’s Global Media Maker fellow and is presently working with Miriam Chandy Menacherry as scriptwriter and impact producer on From the Shadows.

Claire has come on board as a consulting producer giving the film the vision it requires. Formerly the Director of Programming and Policy at IDA. She has served as a festival juror, programming consultant, and panelist for several prestigious platforms