A journey to bring visibility to the ‘invisible injury'...

When two filmmakers reconnect, post-injury, they embark on a journey to understand the world of concussions; exploring why traumatic brain injuries (TBI) are globally misunderstood and what happens when radical empathy and understanding the brain leads to healing.

Imagine waking up with a different personality. Or suddenly losing control of your life, and no longer feeling connected to your sense of self. This sounds like the plot of a science fiction movie, yet it’s the reality for many survivors of traumatic brain injury (TBI).

Similar to the disconnected neurological paths disrupted by a TBI, the world of concussions remains disconnected as resources known to heal and recover brain injury are not widely available.

Guided by their desire to understand the impacts of their own brain injuries, this impact-driven documentary follows two young filmmakers, Zoë Salnave and Lauren Lindberg, on a search for other TBI survivors across the nation to bring visibility to the ‘invisible injury’ and drive brain injury out of the dark and into the light.

Navigating their journeys in parallel, the filmmakers unite with their subjects in search of answers. The Black Brain shows survivors of TBI, facing hurdles in their recovery, but ultimately find grace in the journey, a greater connection to the human will to live, and a hope unlike any other.

Brain injury isn’t a period at the end of a sentence, but a comma, giving pause to a survivor and leading to a deeper understanding of their place in life.

The Black Brain Film asks; can the collective strength of a community of survivors power a global healing movement?

Make a donation to The Black Brain. 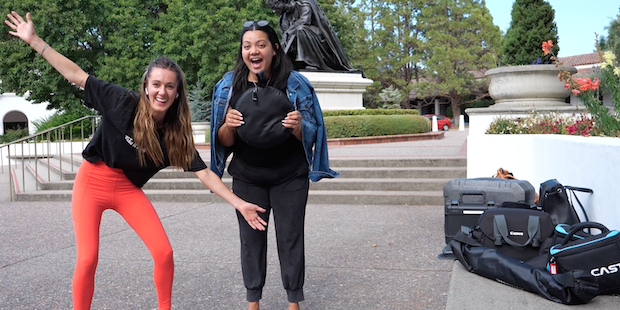 Zoë Salnave – Director
Originally from the East Bay Area, Zoë Salnave has been an auteure in crafting narratives steeped in diverse urban culture from a young age. Through her lens as bi-racial, Jewish woman of color, she found a hole in the storytelling cannon that doesn’t showcase the colorful world she knows to be real. With underrepresentation fueling her, Salnave’s documentaries have been awarded internationally including a Resolution Award from the California Senate and screening for the Obamas for her humanitarian work in filmmaking in 2010. Holding a BA from Mills College in Cinema Literacy and Cultural Studies, and her MFA from USC’s School of Cinematic Arts in Directing and Producing, she remains dedicated to storytelling that is diverse, inclusive, and progressive, by showcasing characters that reflect the nuance and multilateral complexities of today’s world. Salnave has worked as a freelance Producer and Director for over 14 years. She has also worked in Television Development for IMAGINE Entertainment under Brain Grazer and Ron Howard, as well as a Producer on the SHOWTIME docu-series Couples Therapy. She currently works as a Creative Director for Glass & Marker based in Oakland, California bringing human-focused storytelling to investor and commercial audiences.

Lauren Lindberg – Producer
Lauren Lindberg is a seasoned documentarian and Producer with over a decade of experience working on the front lines with innovators and visionaries; taking complex topics and distilling them into meaningful experiences that deeply resonate in a world in need of re-imagination and inspiration. As a brain injury survivor, Lindberg brings a nuanced, experienced based perspective to the topics she tackles – suicide, mental health, women’s health, and disibility. Lindberg’s work has screened in over 60 film festivals worldwide. Lindberg has been featured on PBS Independent Lens `Leading the Conversation: Young Women Voices in Media,’ and has won a Jefferson Award for her work in impact-driven storytelling and community activism. She currently produces documentaries for Freethink, a digital platform that highlights the innovative people, ideas and technology that are moving our world forward.

Jessica Butler – Associate Producer
Jessica Butler is a Latinx creatively focused producer and brand strategist, dedicated to creating entertaining, inspiring and engaging content on a variety of mediums. Her specialities lie in strategic planning, creative problem solving, outreach, and awareness. Butler led the creative development team and production of the award winning Childish Gambino Google Playmoji launch campaign commercial debuting in the Grammys, resulting in a Cannes lion, 223% increase in app downloads, and 21 MM impressions on Twitter. As a brand strategist she has led, planned and executed large scale theatrical, platform and VOD campaigns (3-16 MM) for new kid on the block movie studio, STX Entertainment. More recently she led a PR and social team to provide executive guidance and coverage on the Covid-19 pandemic and Black Lives Matter movement, which included a virtual dinner party program with celebrity influencers, yielding 3.5 million meals donated to Feeding America. In her spare time she volunteers for a local council woman, is a blog content creator and is spearheading the production development efforts of independent documentary films.

Make a donation to The Black Brain.