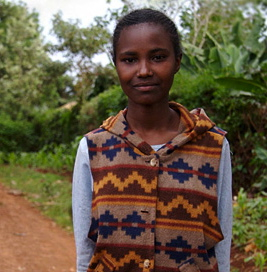 During Jennifer Arnold’s junior year of college she studied abroad at the University of Nairobi.

Interested in sponsoring a Kenyan child, Arnold learned of a youth education fund that was being established. Chris Mburu, once a young impoverished child in Kenya, was fortunate to have his early education sponsored by a holocaust survivor living in Sweden named Hilde Back (costing her just $15 per term). Mburu was a successful student and he eventually attended Harvard University and later became a UN human rights lawyer. Inspired by his own experience, Mburu decided to start a scholarship fund named after his beneficiary Hilde. His journey and efforts are what inspired Arnold to make A Small Act.

Soon after hearing Mburu’s story, Arnold wrote a 10-page proposal for a documentary film. She approached Cherry Sky Films upon recommendations from friends, and during their first meeting, was given the majority of shooting budget. Despite the limited funds, Arnold knew she could make the film even if she had to do it in the most bare-bones way possible. She estimated that they could make $300K in foreign sales and $100K domestically, so they should budget A Small Act for under $500K.

To secure her exclusive rights to make the film, Arnold had the subjects sign a release during preproduction (which included the right to create a narrative version of the film based on the documentary). Within three months of hearing the initial story, Arnold began filming her documentary. She had spoken to Mburu on the phone, but had never met her main subject before the first day of the shoot.

In September of 2007, Arnold, along with her DP and producing partner Patti Lee, left Los Angeles with their equipment in two suitcases, and a HVX camera as their carry on (a camera that wouldn’t intimidate the people in the small towns and villages where she would be shooting, but would still deliver a high-quality image).

Firstly they flew to Sweden to interview Hilde Back, and shoot footage of her birthday party. Chris Mburu also flew in, and the filmmakers were there to capture him meeting Hilde. Chris and Hilde had met for the first time in Kenya, at the launch of the Hilde Back Education Fund. Chris shot home video of that meeting, which was used to represent Mburu and Back’s first meeting in the film.

From Sweden they flew to Switzerland, where Chris Mburu now lives, for interviews and filming, and then returned to Los Angeles for about a week. The Sweden/Switzerland shoot took about two weeks.

In late October/early November, they flew to Kenya and rented an apartment in Nairobi, they needed somewhere secure with reliable electricity so they could download footage and recharge their camera batteries each night. Arnold and Lee began scouting schools on Oct 22, and started shooting two days later in a small village a little over an hour outside Nairobi. The filmmakers received help from a local agent who coordinated their paperwork and attained filming permits.

The filmmakers were challenged from the get-go as the village residents spoke mainly Kikuyu, and Arnold only understood limited Swahili. “It took the first three weeks for us to figure out how we could shoot everything and know what was happening,” says Arnold. “We shot a third of the material blind, not knowing what we were hearing.”

It took the filmmakers many weeks to find the children who would be the other subjects of the film, along with Chris Mburu and Hilde Back. They already had a back-up subject, but Arnold was looking for children who were dynamic on camera, and who seemed to have a good chance of winning one of the prized scholarships offered by Mburu’s fund, that would hopefully set them on a similar life path to their benefactor. After starting off with nine kids, the filmmakers eventually honed in on three from the same school.

Every three weeks, Arnold would receive a translation of partial material she had shot weeks prior which would then inform her subsequent shoots. The initial investment from Cherry Sky Films, along with money from two smaller private investors allowed Arnold and Lee to complete the Kenya and Europe shoots (3 month Kenya / 2 weeks Sweden & Switzerland). Aiming to have 150 hours of footage, they left Kenya in January 2008 with over 250 hours.

Back in Los Angeles, Arnold sought post-production funding. Her initial investments had been mostly depleted. She convinced an editor, who was also a friend from film school, to reduce his typical rate. He was looking for more documentary experience and was willing to accept a reduced fee in exchange for the feature documentary editing credit. Arnold then drafted a new documentary proposal and cut a short montage of footage. After a few months she was able to secure additional funding from Considered Entertainment. Simultaneously, she enlisted the help of interns to create QuickTime files of the footage that were converted to the old VCD format (video compact disc) using Toast. Each time a set of 100 was created, they would be FedExed to Kenya. The film’s production driver/assistant coordinated a team of people from Central Kenya who spoke Kikuyu to perform the translations. Word documents were created with time codes and translations and emailed to Arnold. In total, it took six months to complete the translation of her footage.

After receiving the translation of her dailies, Arnold realized that much of her footage that appeared interesting was unusable: for example, a heated conversation between people turned out simply to be an argument over who fed the cow. Many translations were very literal – “Don’t you out the mouth loudly!” – and it sometimes took them a while to deduce the true meaning:

“Don’t shout.” Eventually they were able to locate someone in Los Angeles to confirm that their translations were accurate, and 90% of the time they were.  After bringing a second, more seasoned editor on board, Arnold realized that they would need additional footage to fill in the story holes. Due to continued support from Considered Entertainment, in the early summer of 2009 Arnold was able to fly back to Sweden and Switzerland to shoot more footage of

Hilde Back and Chris Mburu. With a two and a half hour rough cut completed, A Small Act was accepted into the Spotlight on Documentaries category at the IFP Independent Film Week. Pre sales as well as grants from Cinereach, Sundance Documentary Fund, Chicken & Egg Pictures and the Elle/Garnier Film Independent Director’s Fellowship would fund the final stages of postproduction.

With only a 15-minute sample reel in hand, Arnold attended IFP Film Week in the fall and was approached by HBO almost immediately thereafter. “We were not expecting this at all,” says

Arnold. “We didn’t even have a sales agent.” HBO was on board to license the film. Arnold, along with her lawyer, brokered the sale with HBO (for an undisclosed amount). The broadcaster showed A Small Act as part of its Summer Series later in 2010.

At IFP Film Week sales agent Louise Rosen came on board to handle international television sales. Rosen takes a small commission (in the range typical of a sales agent, roughly 10% to

15%) from each sale she brokers. She immediately set up a pre-sale to broadcaster ABC Australia (also undisclosed amount).

In late 2009, A Small Act was accepted into the 2010 Sundance Film Festival and received publicity and other support from HBO. During the 10 days of Sundance, following emotional Q&A sessions, festival audience members independently donated nearly $90,000 to the education fund featured in Arnold’s film. Individual donations ranged from $20 up to a staggering $50,000.

The filmmakers didn’t have a producer’s rep at Sundance; they’d found it hard to find someone to take the film with several rights no longer available. Many reps, felt the film was difficult to represent with domestic TV rights already sold and international broadcast already represented.

The filmmakers left Sundance with interest from additional territories, but nothing was solidified. Rosen didn’t attend Sundance as she said very few foreign buyers attend the festival.

The audience response at Sundance inspired Arnold to start a social outreach program around the film entitled: “What’s Your Small Act?” It encouraged people to make donations, no matter how small, to any cause they felt passionate about or to volunteer time if they didn’t want to donate money. The idea being that even small donations do make a difference and can grow into big movements, in the same way that Hilde Back’s $15 per semester had changed Chris Mburu’s life and inspired him to start his own charitable foundation. HBO partnered with Network for Good who created a website devoted to encouraging more small acts: (networkforgood.org/asmallact). The filmmakers themselves launched a “Take Action” page on asmallact.com and sought NGO and corporate sponsors for an outreach effort via The Good Pitch, a program run by Brit Doc and the Sundance Documentary Film Program.

A Small Act received unexpected exposure including editorial and transit advertising due to its inclusion in the HBO Summer Series. The film also received The Humanitas Prize, something

Arnold feels may not have been possible were it not for the heightened visibility that Sundance and HBO provided.

After a limited theatrical release, A Small Act began its semi-theatrical release through Film Sprout, aimed at art house theatres, human rights groups, churches, universities, and film societies. A grassroots and community distribution company for documentary films, Film Sprout only takes four projects each year. The filmmakers paid a flat, monthly fee to Film Sprout but keep 100% of the profits.

The film opened theatrically at the Quad Cinema in New York on October 29, 2010 but did not expand to additional cities. Dogwoof, a UK film distribution company specializing in social issue films, licensed the film’s UK theatrical rights. After significant interest from the faith-based communities, that had learned of the film through the “What’s Your Small Act?” campaign, the release was scheduled to coincide with Easter in April 2011. Other international territories sold thus far include Spain, Sweden, Netherlands, and the pre-sale to Australia. They are currently in negotiations for a few other European broadcast deals but foreign sales have been slower than Arnold expected.

New Video licensed DVD and digital rights and Roco Educational licensed educational rights.  They are also looking to partner with corporations and non-profits to continue to build on the Small Act movement.

A Small Act continued to play festivals around the world, including Edinburgh, Los Angeles,

Dominican Republic, and Hot Docs in Toronto. The Film Collaborative handles festival distribution for the film.

Advice from the Filmmaker
Arnold recommends figuring out a strategic grant plan and assessing the market before making a documentary film.

In order to survive while making A Small Act on an extremely limited budget, Lee worked on and off as a director of photography for various projects during A Small Act’s post-production phase.

Arnold dipped into her savings and took a lighting director job on a reality show over the course of the three years it took to complete the film. “It’s not a plan that I want to stay with for the rest of my life,” says Arnold, “but all of the sweat equity and hard work is totally worth it… You get out of it what you put into it.”