Financing: Self financed through mortgage on his own house and additional loans.

Synopsis:
In 2005, two documentary filmmakers embarked on a journey to peer into the daily lives of ordinary career criminals. What they didn’t expect was to end up spending a year in the life of Kaspar Carr. A reclusive man, whose skills have made him one of Chicago’s most prolific and elusive burglars. As the filmmakers attempt to delve into this highly successful thief’s personal life, Kaspar’s true motivation continues to elude them. It is ultimately Kaspar who draws them into his world in a way they never expected. Borrowing from the traditions of film noir and cinema verite, “Street Thief” creates a new, exhilarating genre of filmmaking; tapping into our voyeuristic obsession with crime, and questioning the very nature of documentary filmmaking. – via A&E Indie Films 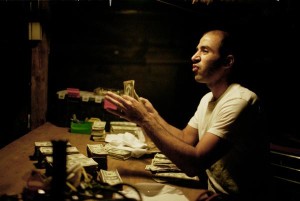 Development
Street Thief was made with the objective of creating a calling card for the director.  With that in mind, the producers brainstormed on ideas that could lend themselves to creating an original, fresh film. Drawing from their fascination with crime, they developed a story focusing on the life of a criminal. The result is a realistic view at the life of a criminal in which the film director plays the main character, a thief in the streets of Chicago.  Due the realistic style in which it was shot and the inclusion of interviews with law enforcement and other experts, most initial viewers thought they were watching a documentary about a real character.  This proved to be a challenge in positioning the film later on.

Festival prep and Sales Team
Street Thief was originally invited to premiere at the Hamptons and AFI film festivals in 2005.  At the time the filmmaker received those invitations, he sent a DVD to several producer’s reps to secure representation.  In September of 2005, producer’s rep Andrew Herwitz agreed to rep the film for 20% of all sales with a one year commitment to represent the film.   Herwitz advised Bader not premiere at the Hamptons or AFI, but to wait to submit it to Sundance and if accepted premiere there.  The Sundance Film Festival did not select the film for its 2006 Festival.  Soon after, they were invited to the Tribeca Film Festival, which thought Street Thief was a documentary and wanted to include it in their documentary competition.  But when the filmmakers revealed it was not a documentary the film was programmed in the Spotlight section of the festival.

For its Tribeca premiere the filmmakers hired Amanda Lundberg of the Dart Group to do publicity for the film.  They paid a $7,500 flat fee for the Dart Group to service the film all through its Tribeca premiere. For this fee The Dart Group set up special screenings for press, sent publicity materials to all the trades, made the press kits including bios, filmmaker statements, and EPK.    The filmmakers believe the company lowered their fees because they truly liked the film and felt very strongly that they could support it.  The filmmaker notes that filmmakers when hiring a publicist should find one that loves their film.  Malik was pleased with the Dart Group’s work at the Tribeca Film Festival, where they garnered great reviews from Variety and The New York Post.  These reviews got the attention of different agencies—the filmmakers were contacted by Endeavor, UTA, ICM, Paradigm, WMA, and CAA, and signed with CAA agent Scott Greenberg shortly after Tribeca.

Strategy
The fact that Street Thief played like a documentary presented a challenge in positioning the film at its premiere in Tribeca.  Even though there was the temptation to play with it and present it as real, both the Dart Group and Andrew Herwitz advised the filmmakers not to present it like a documentary, to be honest and come forward, because when people figured it out there could be a backlash for the film and the filmmakers.

In retrospect, Malik regrets having done the Q&A at Tribeca.  He believes that perhaps the best way to sell the film was not at a festival but that prior to the festival they should have found a small distribution company and let them decide how they were going to market and position the film considering the perceptions of the film as reality. 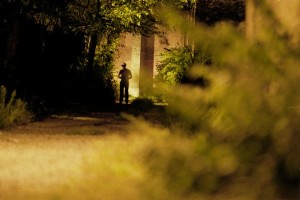 Release and Sale
Although several distributors expressed interest in the film at Tribeca (Samuel Goldwyn Co., Picturehouse followed by Sony Classics), they all ultimately passed.  Bader attributes it to the challenges the film represented for marketing.

After Tribeca, Herwitz fielded several offers, in particular, A&E wanted to acquire the film, meanwhile Herwitz put them on hold trying to get a theatrical partner to come on board, before signing with the cable company.

The Deal
Two months after Tribeca, A&E bought the film for an undisclosed amount.  The terms with A&E are a three-year license for North America on Cable and DVD.  The cable company made no marketing commitments.  The filmmakers hired an LA based graphics company to do the promotional materials for $7,500.  For the Cable premiere they did a wild posting campaign for a cost of $20,000.  They split this expense 50/50 with A&E.

The Results
The film premiered on the A&E channel on July 21st, 2007.  It will was released on DVD on October 2nd, 2007.  For the DVD street campaign the filmmakers invested $12,000.  The filmmakers expect to get 15% of gross sales.  It is still too early to make an assessment of sales.

Advice From the Filmmaker
You can’t hold your breath hoping for someone to notice you. You have to put all your energy and pull every resource you have to make that one film that will get you noticed.