Four years ago, an L.A. Times article called “How a Gringo Found His Mariachi Groove” caught the attention of filmmaker Aaron Naar. “I was really intrigued by the absurdity of Matthew Stoneman’s backstory—he was a struggling pop-pianist who was arrested for armed robbery and subsequently learned guitar and Spanish while incarcerated,” says Naar. “I emailed the author to track down Matthew. He and I met and came to an agreement almost immediately. We started shooting the next day.”

In 2013, Naar was invited to Film Independent’s Documentary Lab to workshop the film, Mateo—“Matthew dreamed of pop stardom; instead he went to jail, learned Spanish and emerged as the first white mariachi singer.” Now, Naar is on his way to Austin, where the film is world premiering at the SXSW Festival. “Attending the Lab was one of the essential reasons I was able to finish Mateo,” Naar says. “The education, friendships and partnerships I formed within the Lab’s brief time I hope to foster for many years to come. I am so grateful for the experience and I highly recommend it to anyone seeking guidance on his or her first documentary.”

Here, Naar shares the ups and downs of the making of his mariachi story.

How did you discover Matthew?

I moved from New York to Los Angeles in 2009 and started living with Seth Cuddeback and Benjamin Dohrmann, who would later become Mateo’s cinematographer and producer, respectively. In early 2010 Ben brought the article in the L.A. Times to my attention.

Is this your first feature-length doc?

Yes. I have made a few shorts, both fiction and nonfiction, over the past several years. But in terms of both scope and scale, Mateo has been a huge step forward for me. Going from making shorts over the span of several weeks to making a feature over the course of four years has been an unparalleled shift. But Mateo is very in tune with my aesthetic and storytelling preferences and I am quite pleased that I was able to step up.

When was the moment when you first realized he would make a great documentary subject?

Within the first two weeks of shooting, it became apparent that Matthew was going to be a really complicated and elusive character. I interviewed Matthew twice within the first ten days of shooting. The second time, I casually asked some of the same questions I had asked him in the first interview. When I watched the footage, I noticed that Matthew answered the repeated questions with the exact same answers, verbatim as in his previous interview. This pattern continued for many months. Matthew had scripted responses to a wide range of questions. After that, I began to realize that Matthew wasn’t a happenstance performer and that there was probably going to be a lot more intensity and complexity to his character.

What was the most challenging thing about getting this film made?

When I first started, Matthew gave me raw footage from three documentaries about himself that he started but never finished. So I had a few hundred hours of footage spanning 1992 to 2007: his time in L.A. before jail, trips to Mexico, visiting his family in New Hampshire, etc. For the first year, Ben and I edited the archival material intermixed with the present-day footage. Beginning year two, Nicole Vaskell came on board as our main editor, which created a huge spark for the project. She brought an intense work ethic, new interpretation and style to the film. Through her, we were able to explore both the archival and present-day narratives, with no stone unturned. The archival versions of the film actually turned out to be very compelling, but I found the present-day character and storyline to be much more compelling and revealing of Matthew’s identity. Ultimately, it took Nicole, Ben and me a few years to realize that all of the footage we inherited from Matthew wasn’t necessary to the story I wanted to tell. It was a hard lesson learned—what I thought was my treasure trove of archival material was actually a lead weight far too heavy to include.

How much did you shoot, and over what period of time?

We shot over the course of four years from 2010 to 2014. Seth would spend days and weeks shooting Mateo from morning through night in California, Cuba and Japan. He alone ended up shooting several hundred hours. The project taught me the meaning of spray and pray—shoot as much as you can now, hope that it’s good later. Seth developed a style of shooting Mateo in the studio in Havana where he would capture elaborate handheld camera moves within one take, creating a very dynamic, kinetic energy for those recoding sessions. It became one of my favorite aspects of the film. 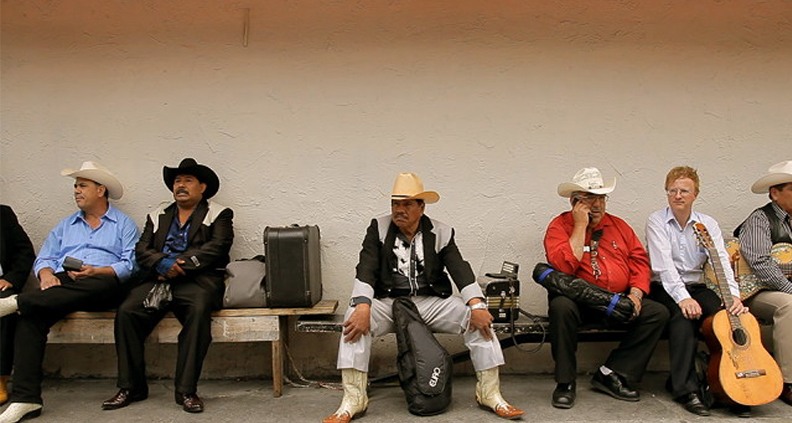 How did you know when you had enough material?

The problem with capturing someone else’s creation, namely Mateo’s album, is that our narrative was resting on Mateo’s ability to create and finish his record. So many days and weeks were spent following Mateo, where we would capture the same scene over and over again, both thematically and emotionally. There was little emotional variety or conclusive activity in his day-to-day life. So Mateo completing his album was a perfect goal for both him and me to complete the film’s production. Unfortunately, it took him a few more years than I initially thought it would. We eventually stopped shooting when I realized that Mateo completing his album did not provide any catharsis for him. He was a man of process. And for that reason, a good portion of the movie highlights Mateo’s process.

What’s the biggest lesson you took from the experience?

I wish I had spent more time at the beginning strategizing how to grow Mateo’s team and network, especially in order to prepare for the stages beyond production. Film Independent, Independent Filmmaker Project, and the San Francisco Film Society all supported Mateo on various levels and were quick to catalyze our strategies for completion, marketing and sales. But taking Mateo from a finished cut to our premiere at SXSW required a new and unanticipated level of sustained commitment and work. This is why I think it is so important to surround yourself with a passionate and trustworthy team that wants to understand, sculpt and support your vision. Mateo would have been impossible to complete without the impassioned collaboration of our entire team.

What was your experience in the doc lab? How far along was the project when you got in and how did the Lab contribute to the shape the film took?

I applied with an advanced rough cut of the film, which I was somewhat happy with. But my acceptance into the Lab came at the end of my third year of production on Mateo and at a time when I had just been rejected from a series of grants. I was financially and creatively strung out. So the Lab immediately provided a huge upshift for the project. Sitting down to workshop not only my own project, but other Fellows’ projects helped trigger new ideas that propelled me to finish Mateo. Having intimate and candid conversations with the mentors who spoke each week, mainly documentary filmmakers much more accomplished than I, was inspiring and painted a much more realistic picture of what I could expect to encounter once my film was complete. Also, it was essential in introducing me to the processes needed to finish, market and distribute a documentary—areas and strategies that I had not explored and whose time commitments I grossly underestimated.

One Fellow, Emily McAllister, who was participating with her awesome documentary, Maidentrip, ended up becoming a huge part of Mateo as producer. She introduced me to her documentary’s production company, CoPilot Pictures, whose amazing team, led by Louis Venezia, also came on board Mateo. It has evolved into one of the best partnerships and experiences I have ever had.

Any advice for other doc makers?

I have learned that the more resilient you are in bouncing back from setbacks, the more money, support and advocates you will gain. A rejection does not necessarily inform the quality of your content. The times I received grant money, foundation support or private investment were sandwiched between much longer series of sobering rejection. Overall, bouncing from potential opportunity to potential opportunity, regardless of result, has been very worthwhile, albeit laborious.

If you could start the process of making this film all over again, what would you do differently?

I wish I familiarized myself more with the documentary community, climate and various doc organizations out there much earlier on in the process. Once I started actively seeking advice, mentorship and collaboration outside the financial front, I quickly became much more comfortable and understanding of the steps I might eventually need to take to release the film. If I didn’t make the mistakes that I made in Mateo, I would have made them on my next film. Now, I’m really looking forward to using what I’ve learned as starting fuel for my next movie.

Ready for Culver City: Fellows Make Their Presence Felt at the...