“I always imagined I’d be a cop. It’s the life around me I didn’t expect to fall apart so spectacularly,” so exclaims dejected Detective Sergeant and divorced mother of two Mare Sheehan (Kate Winslet, in a transcendent performance) in HBO’s murder-mystery-family-drama Mare of Easttown. Embattled in both her personal and professional life, Mare has recently lost her teenage son Kevin to suicide and is drenched in the kind of melancholy that can only haunt a parent who has lost a child.

Fighting for custody of her toddler grandson with Kevin’s girlfriend, Mare’s complicated home life also extends to the fact that her ex-husband Frank Sheehan (David Denman) lives in a house connected to her own backyard and is about to get remarried. Professionally, Mare has been embroiled in the cases of three missing teenage girls in the small town that have gone unsolved for over a year, prompting the county to send help in the form of Detective Colin Zabel (Evan Peters).

Garnering a stunning 16 Emmy nominations this year–including noms for Winslet and Peters, director Craig Zobel and series creator Brad Ingelsby–Mare’s tortured existence unravels over seven episodes in a bleak small town in the outskirts of Philadelphia. Steeped in perpetual sadness and despair, the fabric of Easttown is a prominent aspect of this character study in grief and loss as the community wrestles with the fear of living with a serial killer in their midst.

The job of molding the fictionalized town fell to LA-based Supervising Location Manager Brian M. O’Neill, whose location scouting career was launched one Thanksgiving night some two decades ago with a serendipitous encounter at a bar (details below). Here’s what O’Neill had to say about how the creative freedom from Zobel and Ingelsby empowered his team in securing the lived-in and authentic locations for the series…

How did you first get into the business?

O’Neill: The short answer is I met a guy in a bar, like 25 years ago. The more elaborate one is: I was fresh out of college when I came back to New Jersey for Thanksgiving, and a bunch of friends went out for drinks at Michael Imperioli’s (of The Sopranos fame) bar. The bartender there, Ryan, happened to be Sam Hutchins’ (Joker, The Fate of the Furious) cousin. Sam is a prominent location manager based out of New York and also happens to be good friends with one of my cousins.

Wow! That’s literally how you got your first job in the business?

O’Neill: Yes! Next thing I knew, Sam asked if I would like to go scouting for him and I said “Sure!” without knowing what location scouting was, exactly. I had studied film and photography in college but wasn’t familiar with that role. My first assignment was knocking on doors in Harlem looking for 1940s brownstones for a project.

For Mare of Easttown, how far in advance of filming were you brought onto the project?

O’Neill: Some limited location work had already been done and then my team came in for five weeks of prep.

What was the process of concocting the fictional town of Easttown?

O’Neill: It’s actually made up of several real-life towns in the area. Marcus Hook in Delaware County and Coatesville in Chester County [both in Pennsylvania] are probably the two most prominent towns we featured in all the interstitial and transitional shots. When I took the second unit team out, it was fun to have a lot of leeway to capture the vibe and the flavor of Mare’s hometown which Brad and Craig were after. Those shots really ground the show in between scenes, including those exterior shots in the opening credits. 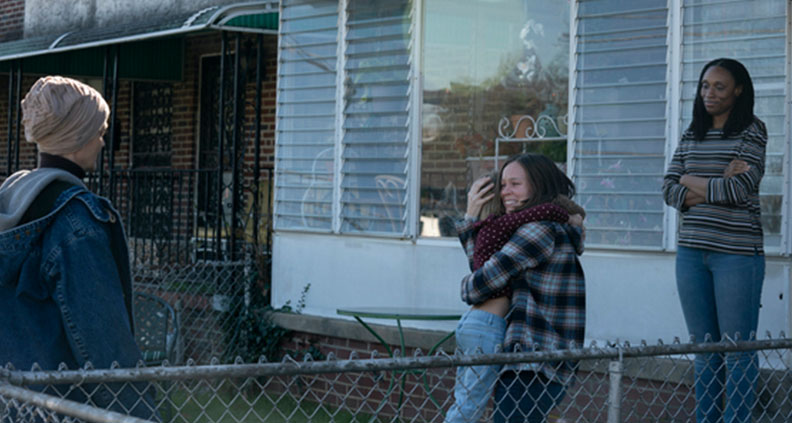 What was your team’s outreach effort like when dealing with these smaller communities that perhaps aren’t used to dealing with Hollywood productions coming to town?

O’Neill: It was going to city council meetings to explain what filmmaking at this level–a major studio production–was about and getting their permission. I would say for the most part we were met with open arms. It’s reinventing the wheel in a way, but also a lot of fun for my team. Some of these locations might have been overlooked when other films were scouting in the Greater Philadelphia area, but these places are the real suburbs of Philadelphia and Delaware County.

How are these towns doing now that they’re famous? The show is a big hit.

O’Neill: I’ve been getting tons of phone calls from these communities, boroughs and townships where we filmed in–they’re definitely getting some attention. I’ve heard the owner of Mare’s house is getting some first-hand experience with Mare fans, who have recently flocked to see her house and looking into her windows. [Laughing] These people are real people living in their real homes–Mare Sheehan doesn’t live there. 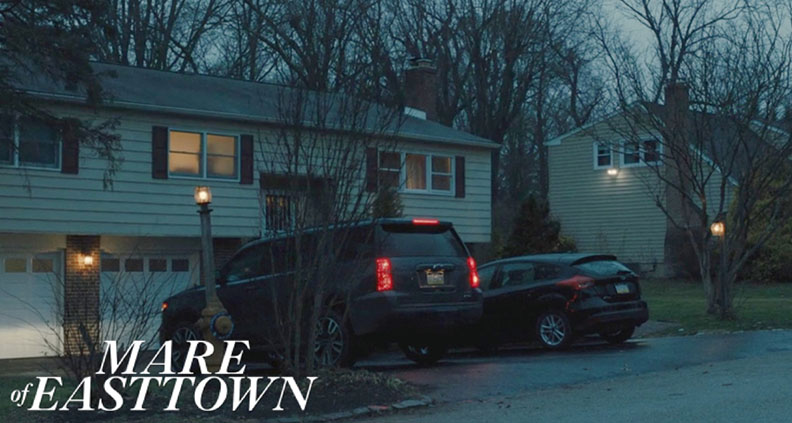 How did you find Mare’s brick-and-clapboard split-level house?

O’Neill: The script initially had Mare and Frank living on a cul-de-sac, so the front of their homes would be in close proximity. That was meant to emphasize the uncomfortableness of having your ex always right next door. But once we started scouting, we wanted that split-level style, which is very prominent in Delaware County as well as for a blue-collar working-class family like Mare’s. When we found Mare’s house in Wallingford, PA, we looked out the back windows and thought, “Wouldn’t it be interesting if Frank lived right there?” It’s even more of an intrusion if your ex-husband’s backyard butts up to your house, right? We approached the neighbor and it just worked out. The interplay between the two houses came from the discoveries we made during scouting and it helps when we have an open-minded director and writers who are receptive of what the real world may present to us.

Your team had the creative latitude to bring different ideas to Brad and Craig?

O’Neill: Definitely–it was a fun challenge to have the opportunity to help drive the narrative as a whole with location suggestions. It’s like, “I know you wrote this in the script, but what do you think about that?” Craig, Brad and [Production Designer] Keith Cunningham were really open to our ideas. And then, our cinematographer–Ben Richardson (also nominated for an Emmy) just made it all look great. Filmmaking is really a team sport. 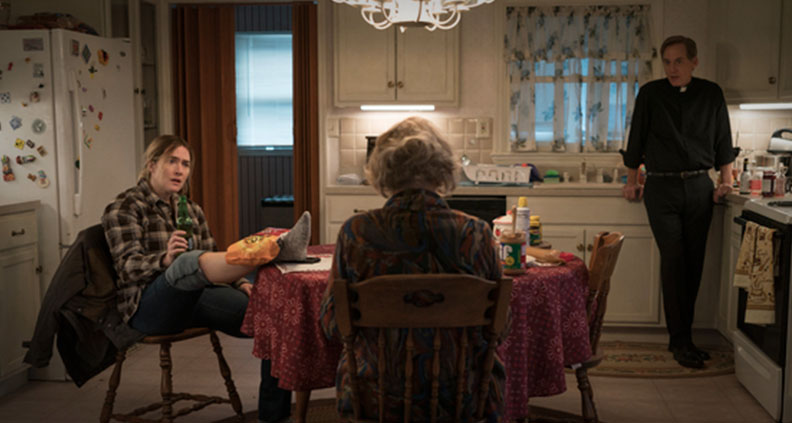 Were the interior shots at Mare’s house–and her ex-husband Frank’s across the street–all filmed in these houses?

O’Neill: Not for Mare’s house, but we did shoot inside what you see as Frank’s house. We built the interior of Mare’s house–Keith had built a remarkable replica of Mare’s split-level house on a soundstage.

It doesn’t matter which scene–whether it was Mare driving around, the view of her neighborhood or at the police station where she works–the space these characters inhabit really feels lived-in and very authentic.

O’Neill: Creatively, Brad really wanted the locations and the texture of the community to be one of the characters in every scene. It was a huge push–supported by the studio–to make it as authentic as possible. So far, in every review that I’ve read, the word “authentic” or “authenticity” seems to be mentioned, so I hope we’ve succeeded in that respect.

For more on how the Mare of Easttown team overcame the challenges posed by the COVID-19 shutdown in the middle of principal photography and what, exactly, went into finding the location for one of the pinnacle sequences at the end, check back Wednesday for Part Two.

Freedom From Tradition: Mindy Kaling on Why ‘The Mindy Project’...