As you hopefully know, the 2019 edition of The Portal—Film Independent’s second-year VR and immersive storytelling showcase, which is free to attend—kicks off this Friday at LMU’s Playa Vista Campus. And last week we told you just what to expect, slipping out of our ergonomic hi-def headsets and back into the harsh perdition of analog reality just long enough to outline the showcase’s impressive program full of cutting-edge VR/AR/MR experiences, from room-scale narrative pieces to interactive AR, 360 documentary and more.

For a mere consumer of immersive art, just the opportunity to smorgasbord-sample such a rich slate of programming would, on its own, probably be enough to inspire an impromptu pilgrimage down to the heart of Silicon Beach. But we’re not here solely to whisk users away on fantastical outer space adventures or inside the complexities of far-flung struggle. We also want to empower the next generation of immersive storytellers through actionable advice, industry insight and thoughtful case studies. And really, who better to ask than the experts?

For those looking for a little behind-the-scenes insight into just how these projects come together—from development, production and distribution—we have not one, not two, but four fascinating VR panels to unpack the process, philosophy and utility of this emerging medium.

Free registration for The Portal is now open to both Film Independent Members as well as the general public. Click here to find out how to attend. Keep reading to find out more about this weekend’s panels, happening Saturday-Sunday.

A MEDIUM WITH MULTIPLE APPLICATIONS

Panel: The Under Presents: The Intersection of Gaming, Theatre and VR

Why We’re Excited: Among its many attributes, VR is unique in its ability to unite many different types of artistic expression into a single unified experience. Our first panel of The Portal 2019 explores the intersection of theater, gaming, interactivity and filmmaking. Film Independent Artistic Director Jacqueline Lyanga joins producer Samantha Gorman and Tender Claws studios co-founder Tanya Leal Soto in conversation about their visionary new interdisciplinary project The Under Presents, in which live immersive theater meets VR to bring live actors right into your living room, in an intriguing experience set between two worlds—a jaunty vaudeville stage and harrowing survival landscape.

Why We’re Excited: For more than a decade, LA-based Reggie Watts has been one of Hollywood’s most singular performers—combining elements of stand-up comedy, musical improvisation and performance art. Known for his work on talk shows including Comedy Bang! Bang! and The Late Show with James Cordon, Watts’ latest project is Runnin’, an immersive VR experience striving to take music videos to a new frontier. Watts joins collaborators Adam Rogers and Tim Lobes for a conversation about the development and production of the project—the first VR experience to showcase Intel Studios’ volumetric video technology.

Panel: Dreams of the Future: Social Justice and Equality

Why We’re Excited: VR is unrivaled in its ability to conjure empathy in audiences, which is what makes it such a powerful tool for social justice—presenting narratives around a variety of critical issues that are simultaneously both intimate and expansive. This panel is a conversation with VR directors at The Portal whose work shows how the medium has the potential to enhance collaboration around global issues of social justice, equality and environmentalism, as well as how immersive storytelling can deepen the impact of transformation and community engagement through art and technology.

Why We’re Excited: Similar and adjacent to its utility as a tool for better social justice and understanding, immersive technologies have likewise created an entirely new world of possibilities for learning and education. Here, Loyola Marymount’s School of Film and Television’s Immersive Advisory Council is teaming up with Film Independent to host a panel discussion on Immersive and Interactive Media in Education. The conversation will touch on how LMU is approaching immersive and interactive technology to enhance the educational experience, while also preparing students to work in a constantly changing medium that demands both innovation and originality. 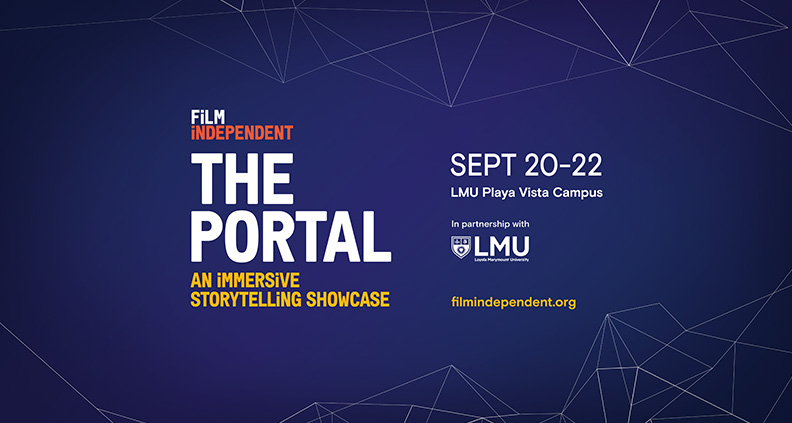 Produced by Film Independent, and in partnership with Loyola Marymount University, The Portal takes place September 20-22 at LMU’s Playa Vista Campus. To learn how to become a Film Independent Member, click here.

Improv, Interactivity and Immersion: Entering ‘The Under...

Wanna Be Nominated for a Spirit Award Too? Submissions are Open.