When you hear “The New Wave” what do you imagine? Maybe the films of Jean-Luc Godard or François Truffaut; a kaleidoscopic jumble of black-and-white art house images paying homage to midcentury Hollywood filmmaking while simultaneously deconstructing it. Or maybe you picture the spikey sounds of bands like XTC and The B-52’s, who took Punk’s rule-breaking spirit and applied across the sonic palette and essentially buying rock ‘n roll another three solid decades at the center of the culture. Or maybe you just picture an actual wave. Like, y’know, one made out of water. Who knows, maybe you surf?

All of these associations were top of mind when conceiving our version of The New Wave: three days of exclusive film screenings, keynotes, panels and community events—part of a free (!) showcase open to the public October 18-20, and taking place at both MOCA Grand Avenue and The Geffen Contemporary at MOCA in DTLA. For more information, click here.

Produced by Film Independent in partnership with KCRW and official host The Museum of Contemporary Art (MOCA), the inaugural edition of LA culture-vulture’s newest destination event seeks to celebrate the “spirit of change” driving the transformation of art and culture today. And of course have a lot of fun, too.

Wanna see that buzzy new indie that hasn’t been released yet? Glean candid insight about the state of the industry from expert Hollywood insiders? Learn to skateboard and/or record a podcast? Chow down at a curated food cart plaza while vibing to a geat, KCRW-approved playlist? We’ve got all that—and more! 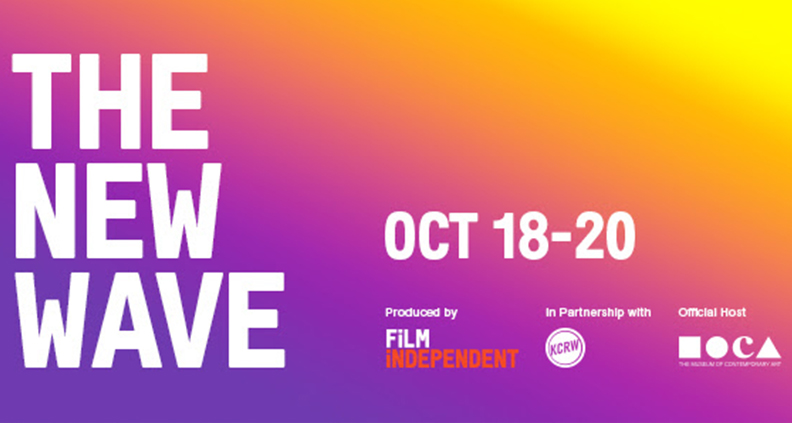 “It’s going to be an inspired weekend,” said Jacqueline Lyanga, Film Independent Artistic Director, who added that the showcase hopes to “provide a platform for artists and ideas” to “bring filmmakers, artists, community and industry leaders together to share their stories and visions of the present and the future”—a goal reiterated by event’s recently announced lineup.

Tickets to all New Wave events are now available—again, for free—to Members of Film Independent, KCRW and MOCA, and will become available to the general public starting this Friday, October 11. For more info, click here.

So as you cinch that (metaphorical) surf tether around your (metaphorical) ankle and get ready yourself to catch this particular New Wave, let’s take a close look at what you can watch, learn, listen to, do and enjoy—full program available here.

“In our first year of this new program, all of the feature films are directed by women,” says Lyanga. “We didn’t set out to [only] select women directors. But as we went through the programming process, these are the filmmakers whose innovative and bold work embodied the spirit of The New Wave.” They are:

Bull (Opening Night Film) – USA (DIRECTOR Annie Silverstein) – After trashing her neighbor’s house in a fit of youthful defiance, Kris is forced to help Abe, who scrapes by on the Texas rodeo circuit. Together, Kris and Abe forge an unexpected connection, helping each other see new possibilities for the future. Bull, premiered in Un Certain Regard at this year’s Cannes, and received several awards at the Deauville Film Festival including Grand Jury Prize. US Premiere

Learning to Skateboard in a Warzone (if you’re a girl) – US/UK (DIRECTOR dir. Carol Dysinger) – In Afghanistan, an organization called “Skateistan” recruits youth and teaches them to read, write—and skateboard!—in Kabul. The film premiered at Tribeca this year, where it garnered a Jury Award. The October 19 screening will also include a live LA Girls Skate Sesh tutorial in the Aileen Getty Plaza welcoming intersectional female skateboarders of all ages and ability.

Scales – UAE/Iraq/KSA (DIRECTOR Shahad Ameen) – Set in a dystopian landscape, Scales is the story of a young girl who stands alone against her family and overturns the village tradition of sacrificing the female children. Scales premiered at the Critics’ Week at the Venice International Film Festival. North American premiere

There will be two separate short film showcases: the first, featuring short documentary works, including Edgecombe, Enforcement Hours, Ghosts of Sugar Land, Sound of Waves, St. Louis Superman and Sweetheart Dancers, with filmmaker Q&As. The second: a screening of the 2019 Project Involve shorts produced in the program by 2019 Project Involve Fellows.

Additionally: the LA premiere of Alma Ha’rel’s Honey Boy—written by and co-starring Shia LaBeouf—immediately following the filmmaker’s central keynote on Saturday night (more info below.) In Boy, Har’el fictionalizes LaBeouf’s own childhood ascent to stardom and subsequent adult crash-landing into rehab and recovery, casting Noah Jupe and Lucas Hedges as Otis Lort, a talented young performer navigating different stages in a frenetic Hollywood career, as LaBeouf takes on the daring (and therapeutic) challenge of playing a version of his own father, an ex-rodeo clown and a felon, within the film.

All this, plus a super-secret (they won’t even tell me what it is) surprise Closing Night Screening—to be revealed to the audience only moments before the house lights dim on Sunday. The programmers have assured me nothing less greatness, a perceptible glimmer of mischievousness twinkling in their eye. Enticing, no?

Hailing from The Bronx, Steven Canals is the co-creator and executive producer of the Emmy and Golden Globe Award-nominated and Peabody Award-winning FX drama series POSE. He made his TV directorial debut with the eighth episode of the second season titled “Revelations.” The series recently finished its second season on FX and will return for a third season. Steven co-created the series with Ryan Murphy and Brad Falchuk. Variety Magazine named Steven a TV Writer to Watch in 2018. Friday, October 18, MOCA Geffen, Warehouse

Alma Har’el (Honey Boy, LoveTrue, Bombay Beach)—a film and music video director who has cemented herself as one of the most genre-bending filmmakers working today—delves into her role as founder of Free The Work, a curated talent discovery platform for women and under-represented creators. The keynote will be followed by a screening of Har’el’s latest film, Honey Boy—see above. Saturday, October 19, MOCA Grand Avenue, Ahmanson Auditorium

Asante Blackk (When They See Us), Olivia Cheng (Warrior), Dawn-Lyen Gardner (Queen Sugar), Lauren “Lolo” Spencer (Give Me Liberty) and Huma Qureshi (Leila) will be honored at the second-ever New Wave Conversation. The New Wave Actors highlights a diverse group of talented actors, selected by Film Independent and SAGindie who continue to deliver breakout performances and deserve industry recognition. The New Wave is a partnership between Film Independent and SAGindie, with additional support from Easterseals Disability Services and SAG-AFTRA. Sunday, October 20, MOCA Geffen, Warehouse

KCRW comes to the Aileen Getty Plaza Saturday night from 6:00 pm- 10:00 pm at the Geffen Contemporary at MOCA—featuring food trucks, tasty libations and DJ sets from KCRW’s own Aaron Byrd and Novena Carmel.

BMAS’s mission is to nurture emerging artists and make art accessible to the vast demographic that is Los Angeles, while also expanding our audiences and community beyond the East Los Angeles and Boyle Heights communities. BMAS was founded as a program that works towards equity and social justice through art. BMAS will live print one of a kind New Wave tote bags just for our attendees. Saturday, October 19, MOCA Geffen, Aileen Getty Plaza

KCRW teams up with Locatora Radio to host an interactive podcasting 101 workshop on how to make a show from scratch using your own unique voice. Mala and Diosa will walk you through their podcast creation and the creative steps they took to build their community driven online brand presence. You’ll walk away feeling empowered to use your natural talents and tap into the local resources out there to turn them into media. Locatora Radio is an indie, do-it-yourself podcast co-hosted and co-produced by Mala and Diosa, two Latinas from L.A. that are committed to archiving and celebrating the brilliance of womxn of color through podcasting, film-making, educational workshops and live events. All ages are welcome. Saturday, October 19, MOCA Geffen, Warehouse

So, ready to go surfing with us on The New Wave? Free tickets for the to screenings, keynotes and panels are available now for Film Independent, KCRW and MOCA Members and will be available to the general public the following week on Friday, October 11.

For the full schedule, go to filmindependent.org.

The New Wave is produced by Film Independent, in partnership with KCRW and sponsored by official host, The Museum of Contemporary Art (MOCA). Supporting Sponsors are Easterseals Disability Services, Hulu, LA County Department of Arts and Culture, National Endowment for the Arts, Netflix, SAG-AFTRA, SAGindie, Warner Bros. and Writers Guild of America West.

Pitch Me: Fast Track Announces Which Projects are Headed to the...

On and All the Way Up: Our 2019 Film Independent Episodic Lab...