Taken together, the collective thumbprint left on the last 25 years of cinema by veteran indie producers Albert Berger, Ron Yerxa and Anne Carey is staggering. Working together under their Bona Fide Productions shingle, Berger and Yerxa have shepherded such landmark productions as Election (1999), Cold Mountain (2006), Little Miss Sunshine and The Peanut Butter Falcon (2019), while the NY-based Carey’s credits include Adventureland (2009), The Diary of a Teenage Girl (2015), 20th Century Women (2016) and Can You Ever Forgive Me? (2018). What three better producers talk shop? More specifically—to Coffee Talk shop.

On Thursday, August 27, the three gathered together on Zoom (“This has disturbing echoes of The Dating Game,” Berger joked) for a roundtable discussion touching on everything from favorite projects, to career advice for young filmmakers, to the unpredictable evolution of the indie film business in the face of new filmmaking technologies and distribution platforms. Presented by Film Independent Education, Fi’s Coffee Talks series takes place biweekly on Thursdays and most weeks features a live, interactive audience Q&A.

Watch the full roundtable below and keep on for highlights. For a complete archive of past Coffee Talks conversations, go here. Got a suggestion for a future Coffee Talks pairing? Leave your suggestions in the comments below.

Brave New World. Speaking to the protracted release of their upcoming project The Last Shift (coming September 25) as well as last year’s critically acclaimed The Peanut Butter Falcon—a film which labored nearly a year to find a distributor after its successful festival run—Berger lamented what he perceived as shrinking theatrical opportunities for types of films he and Yerxa typically make. “We made, like, 30 films [before these two] and always found distribution. But it’s really been a battle,” he said. Said Yerxa: “I think this year, in every way, will be a huge transition year for the culture and for entertainment,” adding: “It’ll be interesting to see what films pull audiences back [to theaters]” post-pandemic.

Glass half… something. Carey agreed with some of Berger’s anxieties around theatrical, but also said that, as a rule, she doesn’t mind premiering straight to VOD. The primary drawback, she says, is that her filmmakers often express some trepidation about a lack of perceptible audience response. These fears that can be offset, she finds, by providing the filmmakers with a robust circuit of virtual Q&As and other forms of live, interactive virtual engagement. Yerxa agreed that “a lot of serious films do end up on platforms,” but that, “It’s somewhat of a mystery what they [streamers] want or what their algorithms support.”

Making it. While the producers’ feelings around issues of distribution were a little more fraught, all three agreed that it’s an incredible time to be making movies—especially for those just starting out. Said Yerxa, “It seems like so many of the skills that a producer might need, that used to only be available at a couple of elite film schools,” are now available, plentifully and for free, on the internet. “That’s a plus,” he said, “that it’s kind of democratically all there for everybody.” 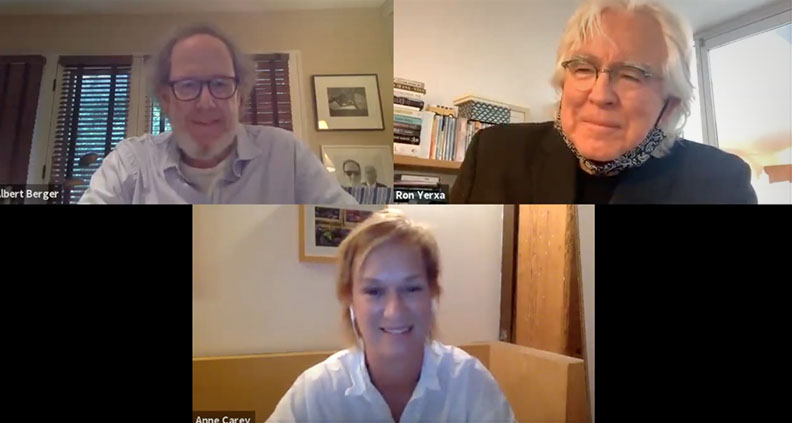 Life on hold. Inevitably, Berger, Yerxa and Carey touched on the effect that coronavirus has had—and will continue to have—on their production slates. For example, one of Carey’s favorite projects in development stars an elderly woman. But thanks to COVID, it’s currently “impossible” to insure such a person. Bona Fide is developing like crazy, but in no rush to put anything into production, according to Berger and Yerxa. “The only thing we have been doing lately that’s been fun is some documentary work,” Carey said, “sending iPhones to people and having them shoot stuff and send it back to us [for post-production].”

Small crews, small stories. With regard to what sort of narrative productions are viable during COVID, Carey said she felt that ideas that had previously been viable would now be harder to get off the ground—and vice-versa. “I really wish I had a project about three people in a house in Sardinia right about now,” she said. “I bet we’re all going to be pretty sick of those kinds of movies in a couple months,” guessed Yerxa. Ultimately, Carey said, being in-between projects during quarantine is a lot like being in-between projects any other time. “I still don’t know what I’m going to do next. I’m still reading stories, I’m still trying to understand what works and what doesn’t and trying to pull off the smoke and mirrors of having no money.”

Customize your approach. Opening the chat to audience questions, the panel offered advice about how young writer/director types can politely and effectively approach producers about their projects. In all cases, the key is to do your research about what sort of films a producer has a history of making to see if your project makes sense for them. They also say that 10 highly specific personalized query emails will prove more effective than 100 copy-and-pasted inquires. The lesson? You wouldn’t expect your producer to cut corners—why should you?

(Header: The Diary of a Teenage Girl)

We The People: Bringing the Conversation about Inclusion Below...