Day Two of the 2022 Film Independent Forum was an action-packed day of storytelling, knowledge sharing, and celebrating fresh voices with fresh ideas. Between the evening livestreamed discussion with Cloud Woman Media CEO Bird Runningwater – a member of the Cheyenne and Mescalero Apache Tribal Nations – and three on-demand sessions to equip filmmakers with tools for sustainable production, pitching prowess and tricks of the trade in feature development, there was a well of wisdom to ponder for days!

Keep reading for highlights du jour and check back with our blog for Forum coverage throughout the week. 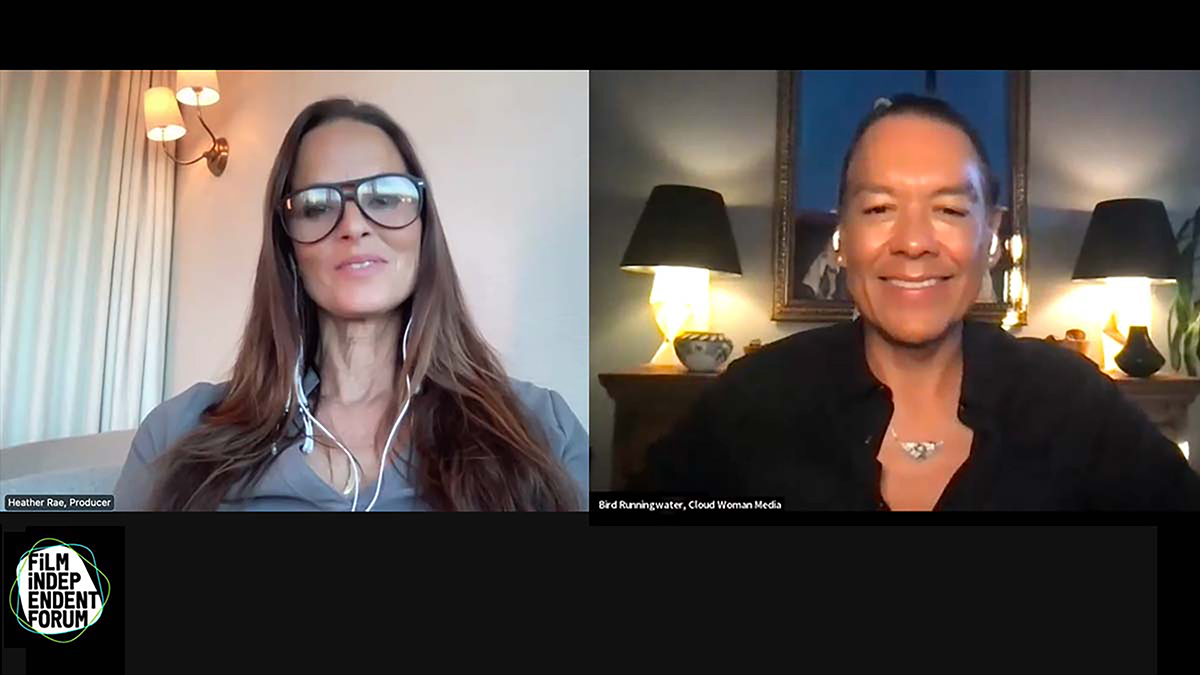 Tuesday’s events culminated with a frank conversation about how the intensified focus on meaningful minority representation in the entertainment industry in recent years have impacted Indigenous people in media entertainment. In the course of an hour, moderator and producer Heather Rae – 2009 Spirit Awards winner for Frozen River – explored the influential career of Runningwater, the former head of the Sundance Institute’s Diversity, Equity and Inclusion division. Also joining the chat was our very own Paul Cowling, Associate Director of Film Education.

While the tone of the conversation ranged from lament to frustration at the disparity between the sheer volume of qualified Indigenous storytellers and their representation in any facet of filmmaking, Runningwater still feels hopeful that things will only get better from here on out. Raised on the Mescalero Apache Reservation in New Mexico with no television and only a movie theater 45 minutes away, he first learned about storytelling from his own relatives.

Citing statistics from IllumiNative, he revealed that “nearly 80% of Americans don’t know that Native Americans exist today as contemporary American people,” attributing the widespread misinformation to two elements: invisibility and misrepresentation. Between Google image searches, textbooks in American schools, and often-stereotypical depictions of Indigenous people in contemporary media, you’re lucky to catch a glimpse of a Native face that dates past 1900. “We’re experiencing an erasure,” the lifelong champion of Indigenous representation remarks.

Runningwater’s 20-year tenure at Sundance was a concerted effort to change that; he describes the Sundance labs as a generously immersive introduction to the Native community, with filmmakers treated to a welcome feast in a teepee before observing – and sometimes participating in – prayers, excursions and puberty ceremonies. Through his work at the Institute, he began to see a shift in awareness as recent world events conspired to thrust the BIPOC communities into the limelight.

“People started flooding my office saying that ‘I need to be including native talent in film and TV.’” This is a great first step and he estimated that 20-25 directors of Indigenous descent are working in television today, proudly commending the work of his contemporaries for shows like Reservation Dogs (FX Networks), Dark Winds (AMC), Rutherford Falls (Peacock) and Hulu’s recent hit sci-fi movie Prey. And it’s just the beginning – he called on filmmakers to be an ally to Indigenous voices by going beyond simply hiring a Native consultant on a project – but bringing on Native producers instead. “It can only enrich the work by including Native talent,” he added.

From Short to Feature: Tonal Risks and Maintaining Control of Your Story in ‘Emergency’ 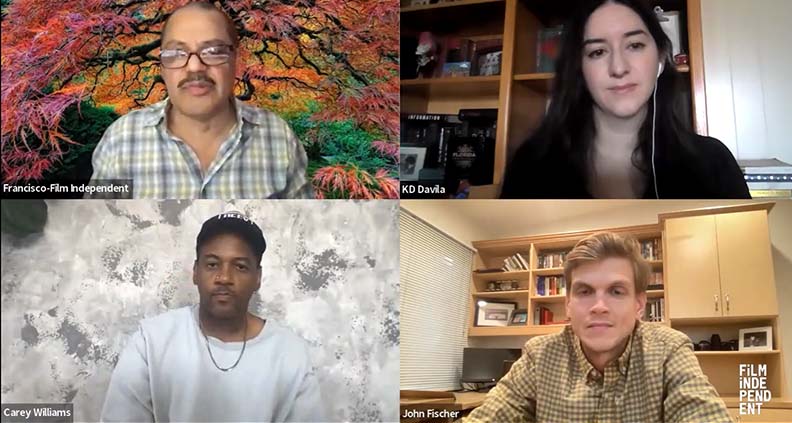 In the wake of the 2016 U.S. Presidential election, dramedy thriller Emergency screenwriter K.D. Dávila embarked on Film Independent’s filmmaking incubator program Project Involve intending to speak “to the world we’re living in right now.” Tasked with writing a personal journey where the characters are challenged to release their inner strength for transformation, she imagined a dark comedy that hinges on the relationship between communities of color and the police. This lively discussion was moderated by Film Independent’s Associate Director of Project Involve, Francisco Velasquez.

A self-professed “very pale” Mexican-American woman, Dávila leveraged her own experience as a sort of shield for her darker-skinned relatives to write the script, which ended up attracting director Carey Williams (2021 experimental romantic drama, R#J). Williams admitted being nervous about putting a humorous take on such a serious issue, but took the risk anyway and anchored the story on the friendship between the two main characters in the film, Sean and Kunle. With the film scoring the Waldo Salt Screenwriting Award at this year’s Sundance, those tonal risks seemed to have paid off.

To retain control of her story, Dávila chose to adapt her short into the feature on spec rather than pursuing development funding. She had no intention of exploring it past the short film when she started out, but ultimately decided to expand the story based on the strength of the concept: “These guys find an unconscious white girl on their floor – what are they gonna do?” “It was a big concept, even though in some ways it’s a small story, an emotional story between these groups of friends in their apartment,” shared producer John Fischer, EVP of Feature Development and Production at Temple Hill Entertainment, where he co-produced The Hate U Give for the now-shuttered Fox 2000 label. “There was a big idea there. The question was: ‘What would you do in this situation?’” Happily, that idea carried them all the way to a Sundance premiere, theatrical release and ultimately, distribution through Amazon Studios. 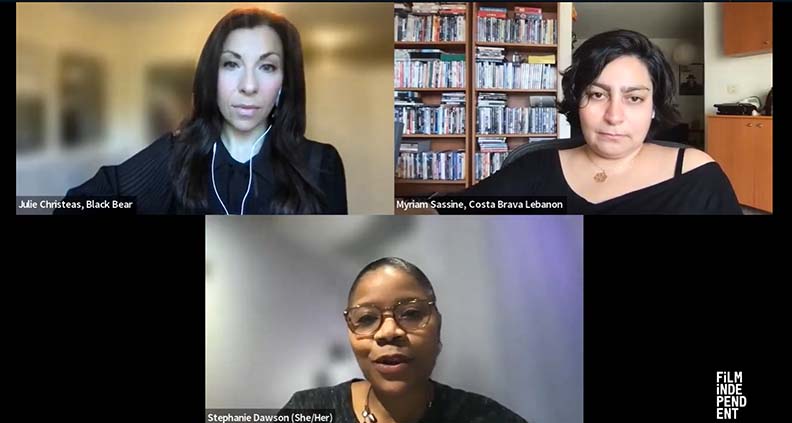 It’s one thing to make a film about the effects of pollution and corruption, but it’s quite another to deal with the bags of trash and water bottles in the wake of a busy film crew on the set of a production. As moderator and producer Stephanie Dawson (Down with the King, Maya & Her Lover) asked about the real-world solutions that Black Bear producer Julie Christeas and Costa Brava, Lebanon producer Myriam Sassine found (and sometimes invented!) to encourage environmental sustainability on set, there were some surprisingly ordinary trade-offs.

Replacing paper and plastic with real dishes and silverware. Using water refill stations as opposed to single-use plastic water bottles. Hiring a local dishwasher. Bringing your own dishes to get takeout from restaurants rather than picking up aluminum takeout trays. Composting leftover food. To help motivate her crew (some of whom were slow to adapt to the changes), Sassine even hired a protocol expert and found a surfboard maker in Lebanon who could reuse their collected cigarette butts.

Given the volume of waste created on any given film set, Christeas underscored the importance of community focus to avoid feeling overwhelmed by the seemingly insurmountable task. “If you look at it as lines in your budget, one step at a time, things across every budget that can be sustainable and green, it’s easier to tackle.” 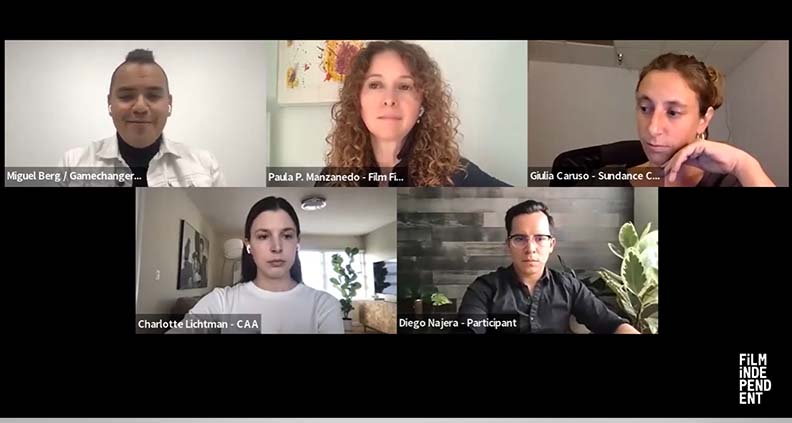 Question: What’s more fun than pitching your story to a panel of industry powerhouses in 3 minutes?

Answer: Watching someone else do it!

Moderated by SVP of Film Finances, Inc. Paula Manzanedo-Schmit (Dive, Ottolenghi and the Cakes of Versailles), the first on-demand session from #FiForum22 was a mini pitch-fest for three Fellows who shared their story ideas and production plans with four seasoned execs, who responded with astute questions and valuable feedback. Thanks to the following execs who joined our session, the filmmakers got some terrific advice that was both specific and universal.

Got a cow in a lead role? Be prepared to answer questions about casting, production hours and cow wrangling (and absurdist dark comedy The Cow of Queens does!). Pitching a personal story involving controversial topics? Answer for your marketability with a lean budget and a killer cast (love story Angel in Retrograde has a meaty role for just the right actor). A heavily stylized drama that challenges ideals of women, violence and how far we’ll go to win – and it’s NOT a boxing movie? Leverage that unique feel and premiere the finished product to potential buyers (Wild Animal is already bringing on EP’s to help).

Watch these enlightening discussions on-demand with your Full Access pass or purchase a virtual  pass now!

Be sure to keep up with Film Independent’s blog and YouTube channel for more illuminating Forum coverage throughout the week. To jump straight to the daily recaps, here they are: Day 1, Day 3, and Day 4, respectively!

What Film Independent’s Doing for Filmmakers (and How You Can...