When Robert DeNiro’s arrived on the set of American Hustle, Director David O. Russell took him around to introduce him to the cast, one by one, who were all in costume and make up, to shake their hands. “He meets everybody, and met Christian first, but he kind of blew by him, like he was nobody, and he gets all the way around and he pulls me aside,…and he goes, ‘Who’s that guy, the fat guy?’ I said, ‘That’s Christian Bale.’ He said, ‘No, no, no, the fat guy, the guy who’s talking to Jeremy Renner right now.’ That’s Christian Bale.’” Finally, DeNiro was convinced—“Wow, he looks really different.”—and Russell had to take him back to reintroduce him. This time DeNiro looked him in the eye and said, ‘Oh my God, so nice to meet you.”


That was just one of the behind-the-scenes stories Russell shared with Elvis Mitchell at the free Members-only Film Independent at LACMA screening of American Hustle on Monday night. The film, as Mitchell pointed out, treads on a familiar Russell theme: tribes at war. In this case, the tribe is comprised of con artists, cops and the women who play them like fiddles. Starring Jennifer Lawrence, Amy Adams, Renner and Bale (hidden behind an engorged gut and under a ‘do that’s being called “the most outlandish comb-over in cinema history,”) the comedy is loosely based on the Abscam FBI sting in the Seventies.


Mitchell noted another commonality with the director’s prior work: “David O. Russell’s movies have the most evocative titles—Flirting with Disaster, Three Kings, Spanking the Monkey—to give you a sense of what this movie’s all about, its original title was American Bullshit.” 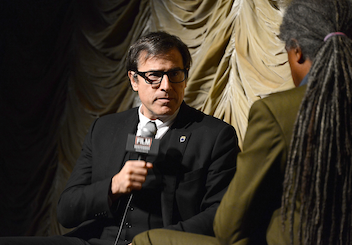 do my term paperHere are some of our favorite Russell quotes from the candid Q&A:

“I don’t think anything is a cliché when you really do it from the heart.”

“I always have to have a classic movie that I’m looking at every day—some part of it, just 20 minutes of it. It’s like having a song in your head. Today I’ve been watching African Queen,… which is an extraordinary movie… kind of a perfect movie…. These two people are on a raft and they go through virtually everything a human can go through on that raft together.”

“Music and cinema have saved my life many times. They’re better than any pill that’s on the market as far as I’m concerned. They’ll change your day or your week.”

“After Three Kings, … I kind of had a period that was very difficult for me for a lot of reasons. Part of it was that I was helping my son, who has bipolar issues, find a better school, which became a massive undertaking with my ex-wife. We got divorced. I lost my way as a storyteller a little bit and that became a very difficult period for me. I was drifting, and the reason I talk about it is because that difficulty turned out to be the best thing that could have happened as a filmmaker. Because it kind of humbled me.”

“I don’t think of these films as categorizations… They’re all about the emotions and the people, that’s the whole thing to me, or as Sinatra would say, that’s the trick of the record. That’s why I’m there. That’s what’s endlessly fascinating to me, and exhilarating to me.”

“I was reading this old interview with Paul McCartney from the early Seventies, and he happened to meet Dustin Hoffman and Dustin said, ‘I could never write a song like you. And Paul McCartney said, ‘but what you do is very similar to what I do. You pull it out of the bag, don’t you, man? You just do it. You don’t know where it came from.’”

2017 Documentary Lab Fellows Announced, Plus a New Way to Get...