There Is No Line

Help independent filmmakers tell their stories.
Make a donation to There Is No Line today.


Film Independent’s Fiscal Sponsorship program opens the door to nonprofit funding for independent filmmakers and media artists. Donate today and help bring There Is No Line to life.

A documentary short exposing an unsettling truth: The United States no longer welcomes the “tired, poor, huddled masses” we’re telling to “get in line” for the American dream. There is no line anymore, not for them.

Immigration to the United States of America is nothing like a visit to the post office or the DMV. There is nowhere for potential immigrants to walk up and rip off a pointy slip of paper with a number on it while CNN blares into a crowded waiting room.

Yet the lie lives on. Every major presidential candidate since the early ‘90s has referenced “the line” in one way or another; it continues to haunt Congressional immigration reform negotiations each year and cable talk shows from both sides of our partisan divide every night.

But there is no line. There has been no line for at least 95 years.

Continuing to discuss immigration into the United States in terms of a “line” does nothing to move the conversation forward. This anachronistic shorthand is, at best, factually inaccurate and, at worst, ethically irresponsible when used by anyone who should know better. The image of “the line” presumes that anyone in the world who is willing to wait it out should be able to immigrate to the United States “the right way,” where the simple truth is that upwards of 99% of the population of the Earth simply has no legal ability to do so.

Make a donation to There Is No Line. 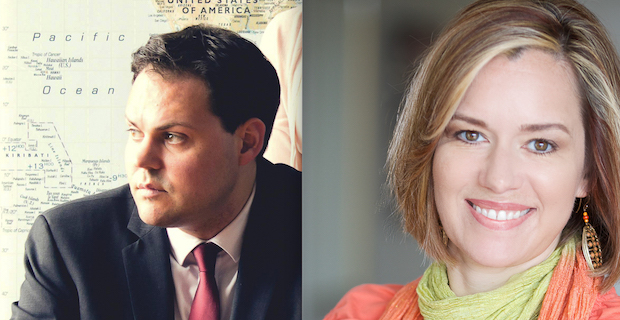 Sharon Boeckle founded Sila Productions, LLC in 2008 as a vehicle through which to craft meaningful, life-affirming stories which promote positive change. Her experience as a filmmaker includes the documentary film Vendemmia, which explores the Cinque Terre of Italy’s struggle for sustainable tourism and environmental balance; the award-winning documentary From the Kill Pen, which explores the controversy over horse slaughter, especially as it pertains to the current debate over its renewed legalization in the United States; and the award-winning documentary short, Bucking Tradition, which exposes the animal cruelty inherent to the American rodeo.

Shortly after wrapping production on Bucking Tradition, when Sharon came upon Matt’s blog posting, she was struck by how effectively the blog utilized humor to efficiently rebut the overplayed (and uninformed) refrain of “get in line!” as a response to our current immigration crisis. She reached out to Matt almost immediately and arranged for an in-person meeting to pitch the project; by the end of the day he’d enthusiastically jumped on board and pre-production began.

Matt Cameron has been a practicing immigration attorney for nearly 15 years. He serves as the co-director of the Golden Stairs Immigration Center and the founder and managing partner of Cameron Micheroni & Silvia, a Boston law firm dedicated to principled, affordable representation of non-citizens in the US immigration system. A graduate of Seton Hall Law School, Matt is a member of the American Civil Liberties Union, the American Immigration Lawyers Association, and the Massachusetts Bar Association, as well as the Massachusetts Committee for Public Counsel Services’ Appeals/PostConviction Panel. He also teaches immigration policy at Northeastern University, serves on the board of the Student Immigrant Movement, and has traveled to Tijuana several times to provide volunteer counsel to Central American asylum seekers.

Matt’s articles and commentary on immigration policy have been featured on NPR, PRI, the Boston Globe, the Boston Herald, The New Republic, The Baffler, The Washington Post, Reuters, the AP, Democracy Now!, and Open Source. Matt is proud of America’s long history of successfully integrating new citizens from around the world through a flawed system he is doing his best every day to improve, help his clients navigate, and his fellow citizens to better understand.

Make a donation to There Is No Line.